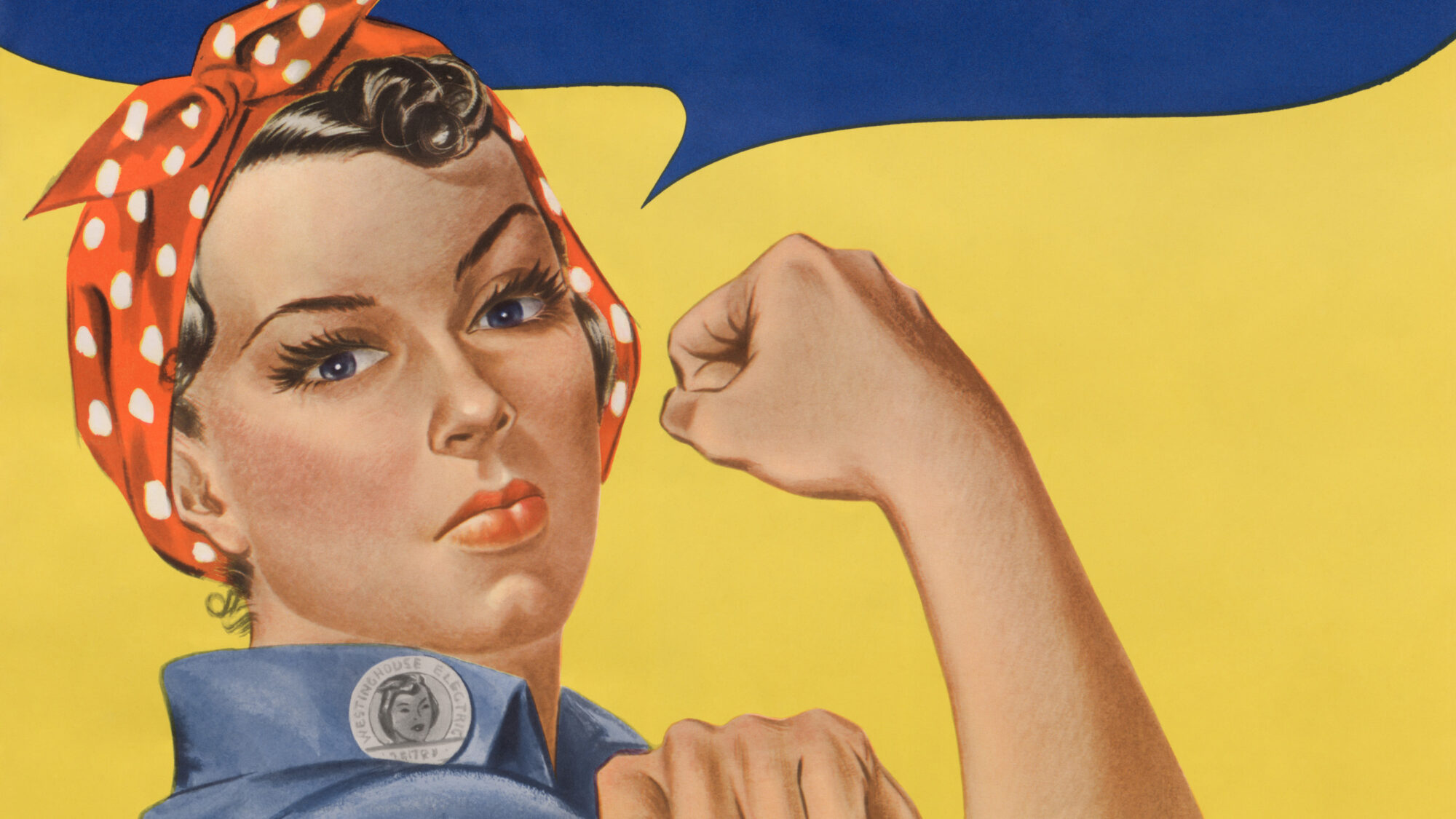 Naomi Parker Fraley, the real “Rosie the Riveter,” has died at the age of 96.

This article appears in: June 2018

She was just 20 years old, wearing coveralls, her hair in a polka-dot bandanna, operating a lathe on the floor of the machine shop at the Alameda Naval Air Station in California when the photographer snapped the photograph that became a poster that became a legend. Forever known as “Rosie the Riveter,” the tough woman flexing her muscle beneath the declaration “We Can Do It!” is simply a part of American history, an image of a nation newly embroiled in World War II and its determined optimism to see the thing through to victory.

One of many American women who went to work in factories and assembly plants across the United States during the war as men signed up for duty with the armed forces, Naomi Parker Fraley had recently come to the Bay Area of California, and, along with her sister Ada, had taken a job at Alameda working on the machine shop floor. Other than the quick stop and flash of the photographer’s bulb, March 24, 1942, was probably an ordinary day.

Fraley passed away in January at the age of 96. According to her family, the real Rosie saw the photograph again more than 60 years after it was taken, at a 2011 event for female former war workers held at the Rosie the Riveter/World War II Home Front National Historical Park in Richmond, California. The family says that she instantly recognized it as one that had been taken that day long ago, but the caption incorrectly identified the young worker as someone else.

A bit of controversy, a case of mistaken identity, loomed. For some years, the inspiring likeness was believed to have been that of another woman, Geraldine Hoff Doyle, who also thought she had recognized herself in the photo sometime earlier. The story that Doyle, who died in 2010, was the young woman pictured was accepted by the media, widely circulated, and dutifully perpetuated in the National Park Service display. According to the New York Times, Fraley wrote a letter to the Park Service hoping to correct the error and received a response requesting that she render any possible assistance to obtain “the true identity of the woman in the photograph.”

Meanwhile, other incarnations of Rosie the Riveter had surfaced. During the war years Norman Rockwell painted his own rendition of the icon for a Saturday Evening Post cover, while Kay Kyser’s band immortalized her in song. Through the years, though, the lasting reminder of women contributing to the war effort has come to reside with the famous poster, originally meant only for temporary display at Westinghouse Electric Company facilities. The painting that has become synonymous with Rosie was completed in 1943 by artist J. Howard Miller of Pittsburgh, Pennsylvania, and in the 70+ years of its existence it has come to grace t-shirts, coffee mugs, and other everyday items, as well as becoming a symbol for the feminist movement.

The credit for righting the persistent but unintentional mistaken identity of the Rosie model goes to Professor James J. Kimble of Seton Hall University, who researched the history of the poster for six years. In 2015, he came across the original photograph with its 1942 date and a caption reading, “Pretty Naomi Parker looks like she might catch her nose in the turret lathe she is operating.”

That same year, Kimble visited Mrs. Fraley and her sister at their home in Cottonwood, California, and she showed him a copy of the photo that she had kept since the 1940s. Kimble has no doubt that Fraley is the woman in the photo, but the tie-in to the classic poster is not quite complete. Miller left no record of the circumstances surrounding his work that would definitively link the two.

However, for Kimble and other observers the circumstantial evidence is good enough. Aside from the other clues, the time frame fits with the photo dated March 1942, publication of it in July 1942 in The Pittsburgh Press where Miller lived, and the poster reaching the walls of Westinghouse the following February.