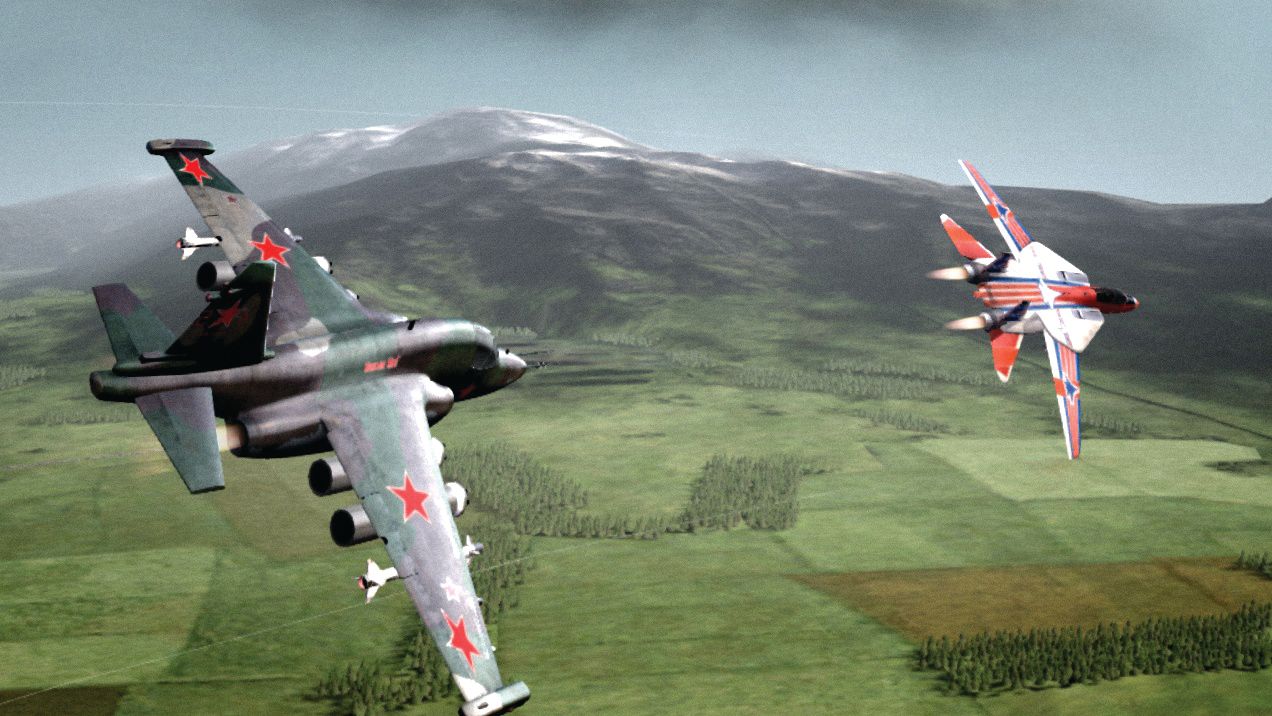 Top Gun: Hard Lock for XBOX 360 delivers fast-paced flying action with a healthy dose of nostalgia for fans of the movie.

This article appears in: June 2012

I have strangely fond memories of the original Top Gun game. I say “strangely” because, for all intents and purposes, it was practically impossible for myself and almost everyone else I knew at the time. For those who don’t remember it or never played it, the 1987 Konami-developed Nintendo Entertainment System version featured some pretty fun cockpit dogfighting considering its limitations, but it’s not exactly known for its action. Rather, Top Gun is notorious for the insanely demanding segments that had players attempting, and constantly failing, to land their planes on the aircraft carrier post-mission.

It became a cruel joke after a few dozen attempts, and an even crueler one hundreds or so more down the line. On-screen commands would prompt players to adjust the altitude, however slightly, and even when it seemed perfectly lined up, attempted landings almost always resulted in spectacular misses. There were also troublesome mid-air refueling sections, but none would come to be as loathed as those landing sequences.

A Modern Iteration from Headstrong Games

Those hazy childhood moments came rushing back the second I got my hands on Top Gun: Hard Lock, a title developed by Headstrong Games that had almost impressively flown under the radar. Seriously, I had never even heard of Hard Lock, and most sites had remained quiet about coverage since it was originally announced for release. Well, much to my admitted shock, it’s actually a pretty damn fun arcade-style dogfighter.

The folks at Headstrong were smart in taking some cues from the big dogs at Namco Bandai and their Ace Combat series. Hard Lock may not hold thrills that are entirely comparable to that franchise, but the emphasis from the very beginning is on up close and personal dogfights that have your plane barrel-rolling, nose-diving, and artfully dodging locked-on missiles. The main hook is the titular “Hard Lock” system. Tailing opponents brings the camera in tight, and on-screen Quick Time Event-like prompts task you with quick-reflex commands that keep you directly behind the enemy fighter as you attempt to keep your reticule in place long enough to get a missile lock on them. Once you’re locked, all it takes is the press of a button to send them packin’. 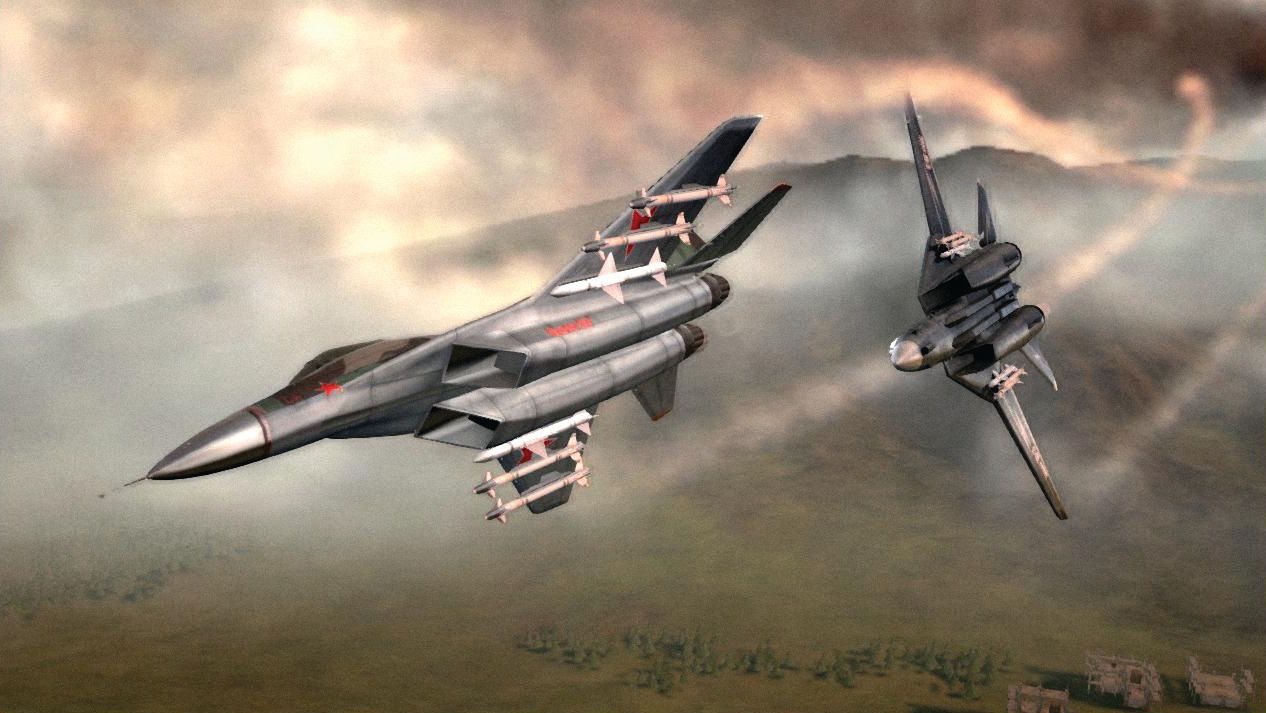 Hard Lock Maneuvers In the Heat of the Chase

Successfully pulling off hard lock maneuvers in the heat of the chase makes your reticule larger, thus making it easier to lock on. It sounds simple, and it is, but the constant diving and rolling makes for an intense and intimate combat experience. Of course, you can also fire away with your guns, but it’s much more difficult, and far less satisfying than getting a lock and letting a missile or two loose. Hard Lock gets off on exactly the right note by throwing the player into the heat of it and doesn’t mess around too much with drawn-out tutorials. It’s pure, fast-paced arcade action.

A Bit Gimmicky, But Always Fun to Play

Once you get the hang of the hook, things do tend to get a little repetitive from time to time. This is especially true when dealing with an escort-style situation that has you fending off swarms of enemy fighters while keeping them from destroying a friendly target, such as an oil tanker. Destroying planes one after the other in rapid succession quickly sheds light on how simplistic the overall gimmick is, but when things get particularly dicey, adrenaline kicks in and the fun comes roaring back. That’s ultimately the key to Hard Lock’s success. Even when it’s repetitive it still wins points for just being a straight-up action game without an ounce of pretense indicating something more. Either you’re on board for something like that or not, but if you are it’s certainly worth a rental or budget pick-up.

Hardcore Top Gun fans (those exist, right?) will likely fall in the purchase category, because there are plenty of fun nods to the film scattered throughout Hard Lock. The story, for what it’s worth, puts you in the role of Lance “Spider” Webb, a new Top Gun graduate following in the footsteps of aces like Maverick and Iceman. As one of the new would-be hotshots, this is your chance to show that you’ve got what it takes, and hopefully you won’t end up like Goose. The presentation of the story and acting throughout are pretty below average, but fans will still get a thrill out of nice little additions like the ability to recklessly buzz the tower, for which there’s even a pair of achievements. Considering how borderline nonexistent coverage had been on Hard Lock, I was actually pleasantly surprised to find that they went to the trouble to include familiar tunes from the flick, including the “Top Gun Anthem” and a re-recording of a “Danger Zone” instrumental. 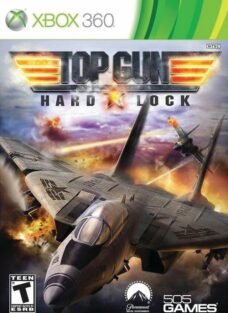 The 14 playable licensed planes in the game include the likes of the F-14 Tomcat, F-22 Raptor, A-6E Intruder, F/A 18F Super Hornet, and the iconic Cold War heavy bomber, the B-52H Stratofortress, among others. Outside of the single-player campaign, which can be completed in a relatively short amount of time, there’s also a Danger Zone mode that puts you up against increasingly challenging waves of enemies in an attempt to outlast them and get a high score. It’s kind of a more arcadey version of an already very arcadey game.

There’s a healthy amount of content here for those who want to take the dogfighting online after (or before) completing the single-player mode. I didn’t get a chance to try out much of the co-op—consisting of Base Defense, Aircraft Escort, and Carrier Strike modes—but there were a few folks buzzing about in the Deathmatch and Team Deathmatch modes. While it served as a pretty fun distraction, I don’t see Hard Lock building an incredibly strong community, mostly due to the aforementioned lack of exposure. I’d love to find out how many people even know this game was out on shelves. Hopefully word will indeed spread, because while it’s not the most original or “triple-A” game on shelves, Top Gun: Hard Lock is plenty of fun, and is recommended for anyone looking for some light, fast-paced flying action with a healthy dose of nostalgia for fans of the film. And yes, for those wondering, you will have to land your plane on an aircraft carrier. It just won’t take you a thousand tear-shedding attempts to do so.