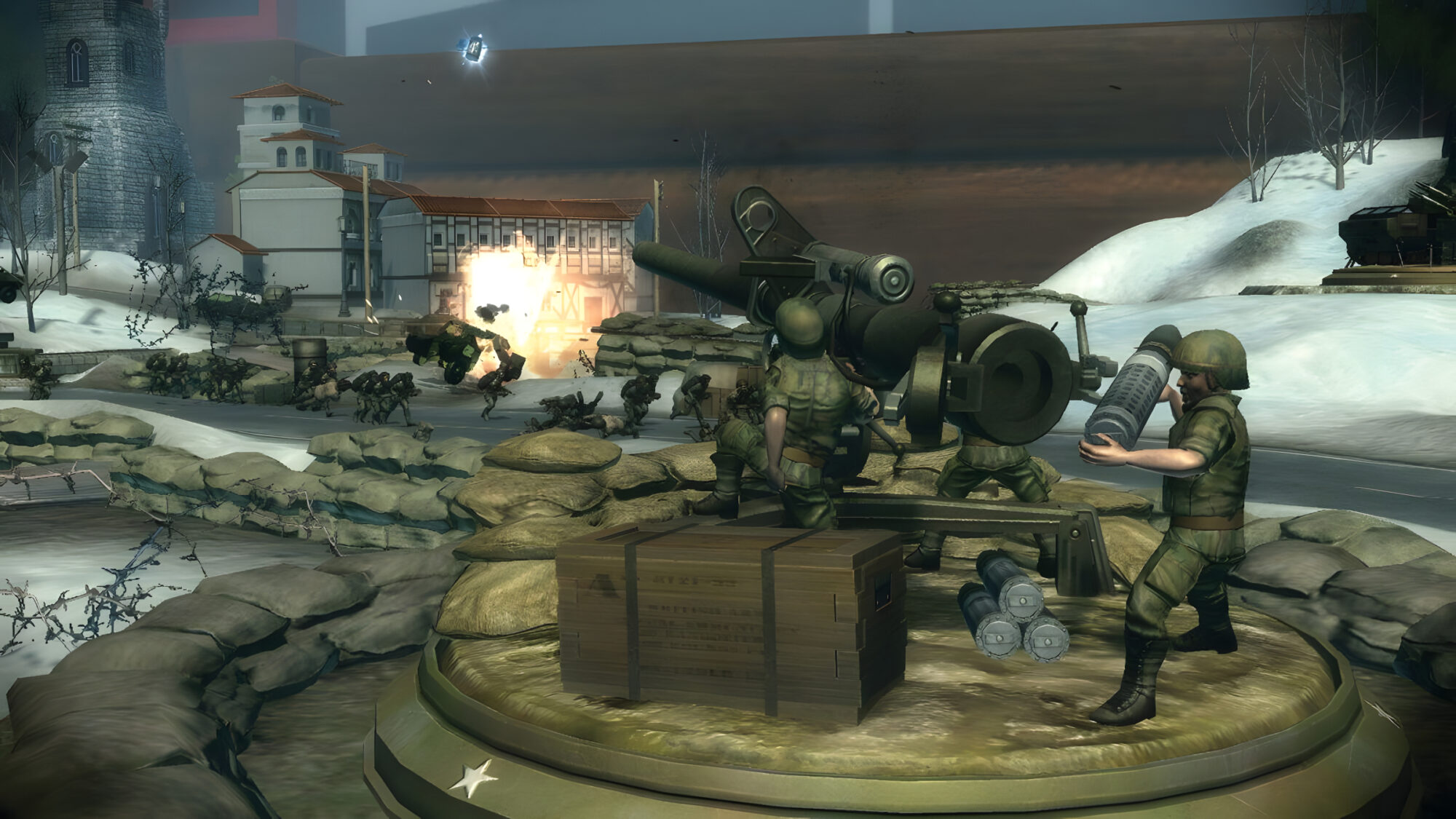 Toy Soldiers: Cold War is a fun way to experience the late 20th Century battles that might have been.

Toy Soldiers: Cold War may have once been a part of Xbox’s “Summer of Arcade,” but the war being waged inside this toy box is a cold one. Wait, no it’s not! Sure, Cold War evokes a time period of political and military tension, but the battles here are as major as they come. Thankfully, it never gets too serious; after all, how can you not crack a smile when the fight is taken so brazenly in the direction of a (relatively) giant toy box protected by a squad of tiny plastic men?

Like the original Toy Soldiers before it, Cold War is essentially a tower defense-style game that tasks players with defending a toy box on their end of the field. If enough enemy units make their way across and strut in undefeated, then it’s game over for your puny platoon. The secret to repelling this Soviet invasion is placing various types of turrets on the terrain, from standard machine-gun placements to anti-aircraft guns and large artillery units. Once these are in place, you can enter any of them in real time and take full control over the shooting action.

Play As the Soviets in Multiplayer

The interactivity is really what separates the Toy Soldiers series from your average strategy or tower defense title. Enemy waves are consistently unleashed—and you can even jump the gun on the countdown if you feel prepared enough to take on the next round of infantry, tanks, choppers, etc.—and there are even fully controllable tanks and helicopters stationed in select stages. The only restriction to these powerful units is a “charge” that requires collecting additional batteries, eventually returning them to their recharge stand when completely drained.

Further improvements over the original include a kill-streak reward that triggers certain bonus attacks, such as the ability to call forth a commando who shamelessly spews ad libbed lines from Rambo as you pound away at the enemies in third person with his unstoppable machine gun and rocket combo (for a limited time, of course). The campaign all of this action takes you through is fairly chunky, especially for a downloadable title, though there’s no option to run through it all from the perspective of the opposition. Still, outside of the main game there’s a ton of fun to be had in multiplayer, where it is possible to play as the Soviets.

Tower Defense At Its Most Addictive

Cold War triumphs over its predecessor in a number of ways, but for me it was the setting that made it the more memorable experience. I was all for the charm of controlling World War I-era soldiers and defending my antique toy box, but the end result of the Cold War setting is a more colorful and exciting game. Where most entries in the tower defense genre focus on the setup—strategically scattering defense units and essentially waiting to see how effective they are as the enemies strut past—Toy Soldiers is all about taking action. If anything, once you get in the groove of firing from behind the sandbags in whatever happens to be your favored turret type, the last thing you’ll want to think about is zooming back out and taking care of business through repairs and upgrades.

Ultimately, there’s a lot to do here, especially if you’re the type of person who constantly wants to improve scores and climb the leaderboards in a nonstop “cold war” waged against the closest of friends. Signal Studios has outdone itself in following up Toy Soldiers, and anyone even remotely interested in tower defense, or just shooting the crap out of tiny plastic men, will find a ton of treats in this toy box.