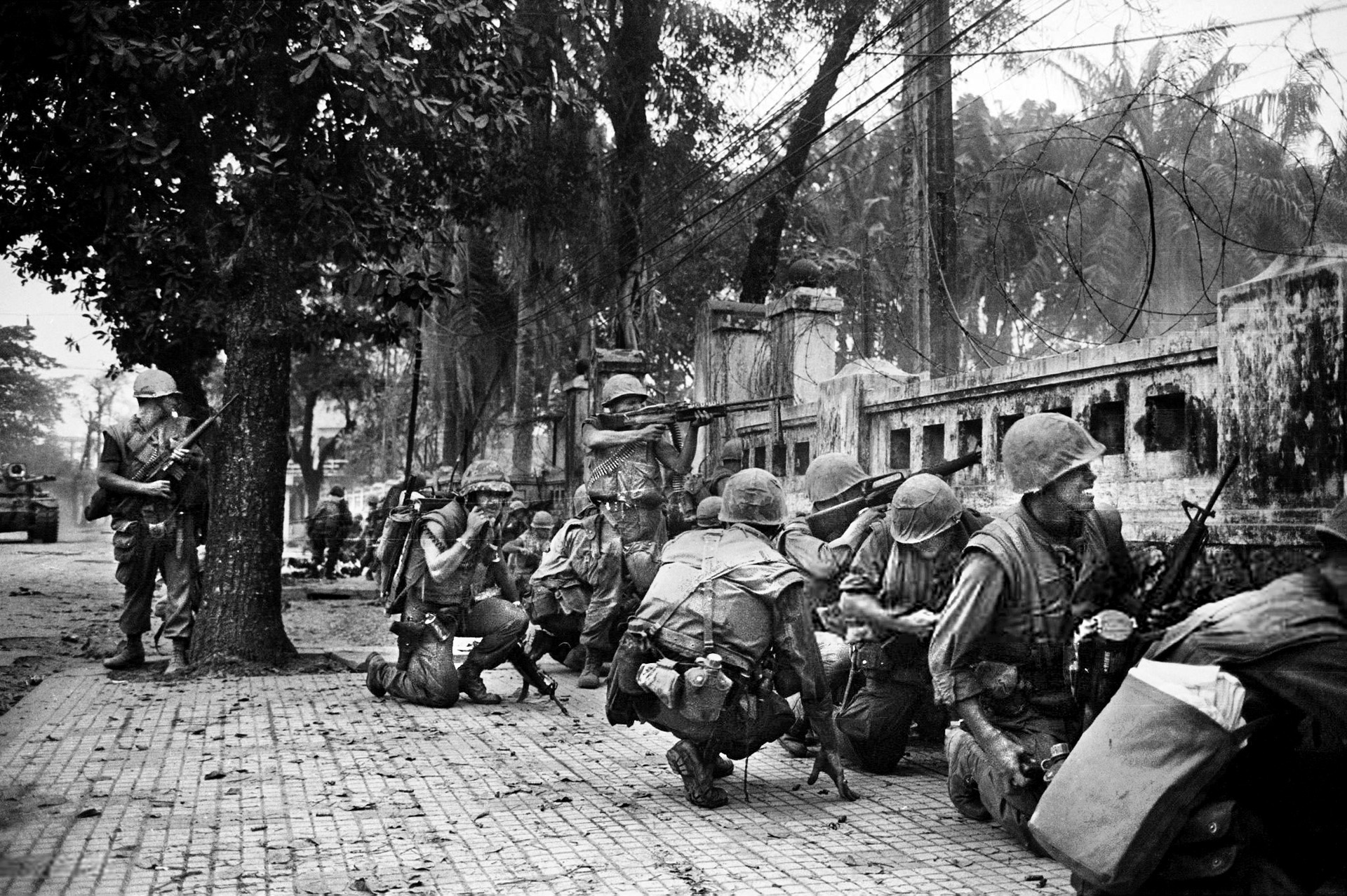 John L. Canley Led a Marine company on a harrowing mission to relieve the siege of the U.S. advisory compound in Hue at the start of the Tet Offensive.

The crackle of small-arms fire on the night of January 30-31, 1968, alerted the South Vietnamese troops at an outpost three miles south of Hue City that the enemy was nearby. They were hearing a firefight between friendly regional militia and the vanguard of two North Vietnamese battalions moving into position to invade the city. The several-dozen South Vietnamese soldiers manning the outpost reported the enemy troop movement at 2:00 am. The firing of North Vietnamese rocket launchers in the mountains to the west of the city ninety minutes later heralded the communist attack on the sleeping city.

On the north bank of the Perfume River lay the sprawling citadel of Hue, with high walls and moats built by the French military and the Vietnamese emperor in the 19th century. The headquarters of the 1st Division of the Army of the Republic of Vietnam (ARVN) was on the north bank, and so was Tay Loc airfield, which doubled as the base camp for the elite Black Panther ARVN ranger company.

Situated on the south bank of the river was the residential sector of Hue, where a U.S.-run Military Assistance Command Vietnam compound was located. The NVA had sent substantial forces, the equivalent of an entire division, to capture Hue and overrun the ARVN-U.S. forces in the city.

The ARVN outpost had seen about a quarter of the North Vietnamese Army forces that would be participating in the surprise attack on the city at the start of the Vietnamese Lunar New Year holiday, known as Tet. What made it difficult for the U.S. forces to grasp was that all Vietnamese—those of the communist Democratic Republic of Vietnam, as well as the pro-Western Republic of Vietnam—regarded Hue as a sacred city that embodied the spirit and heritage of their beloved nation. ARVN and U.S. intelligence forces deemed it unlikely the North Vietnamese would launch a full-scale attack on one of Vietnam’s most revered cultural centers.

Barrages of 122mm rockets slammed into the U.S. Military Assistance Command Vietnam compound in the early-morning hours, blowing eight-foot-wide holes in the ground. When the rocket barrage stopped, soldiers of the 804th Battalion of the 4th Regiment of the North Vietnamese Army assaulted the compound.

North Vietnamese troops, some of whom carried satchel charges, stormed the front gate of the compound, firing their AK-47s wildly as they advanced. The gate had been opened just before the attack in preparation for daytime operations. Some of the communist assault team hurled satchel charges through the gate, while others fired rocket-propelled grenades at strongpoints protecting the gate.

The 200 U.S. military and technical personnel inside the compound at the time of the attack, as well as some Australian troops billeted there, grabbed their weapons and manned the compound walls and balconies of the three-story buildings. The Americans succeeded in stopping the onslaught, but the North Vietnamese, who controlled the streets of the new city on the south bank, wasted no time digging in for an extended battle. They moved into houses around the compound and set up machine-gun nests and mortar positions. It would be up to the Marines to pry them out one block at a time in the coming weeks.

John L. Canley, who would play a leading role in the relief of the compound, was born in Caledonia, Arkansas, in 1938, not far from the Arkansas-Louisiana line. Inspired to join the Marines after watching actor John Wayne play Marine Sergeant John Stryker in the 1949 war film The Sands of Iwo Jima, Canley enlisted in 1953 in the U.S. Marine Corps. “It was about 21 days before I was 16,” Canley said in a 2018 interview. “I took my brother’s birth certificate. On my birth certificate it says J. L. My brother’s name was L. J. so I was able to switch it around and convince the recruiter to let me take the test.”

At the time of the attack on Hue, First Sergeant Canley had flown by helicopter as part of a routine redeployment with his fellow Marines into Phu Bai Combat Base from Quang Tri just a few hours earlier. His unit was Alpha Company of the 1st Battalion, 1st Marines (1/1).

Brig. Gen. Foster LaHue, the commanding officer of Marine Task Force X-Ray at Phu Bai Combat Base nine miles south of Hue on Highway 1, received orders that morning from the III Marine Expeditionary Force to send Marines into Hue to support the beleaguered defenders of the compound. LaHue, who commanded the 1st and 5th Marine regiments, decided to send Batcheller’s understrength company into Hue in trucks. Alpha Company was the first of a number of units from Phu Bai that LaHue would feed in a piecemeal fashion into the battle in the days that followed.

The troops were trying to sleep when orders came to saddle up. The understrength company fielded 75 men rather than its full strength of 150. Protecting the convoy en route were two trucks outfitted with quad .50 caliber machine guns, one at the front and one at the back of the convoy. They convoy rolled out of Phu Bai in a thick fog at 8:30 am.

After a delay attempting to rendezvous with an ARVN battalion that never showed up, the convoy headed north on Highway 1. Alpha Company must have had good karma, because their convoy crossed paths with four M-48 tanks of Alpha Company, 3rd Tank Battalion, 3rd Marine Division. The tank platoon initially was headed to a Navy LCU ramp for transport to redeploy to the DMZ, but the major commanding the tank battalion decided to accompany Alpha Company into Hue.

A short time later they were joined by Lt. Col. Edward LaMontagne, who was the officer in charge of overseeing the transfer of the tanks. Although he did not take command, he accompanied the column and furnished valuable advice. The convoy headed towards the bridge over the Phu Cam Canal that divided the village of An Cuu from the southern half of Hue.

The convoy took sniper fire while passing through the village, but it continued without stopping. After crossing the canal, Batcheller ordered the men to climb aboard the tanks. The two quad .50 vehicles continued on with the tanks.

LaMontagne advised that the convoy should move as fast as possible. The convoy roared through an area along the highway with wooden structures on each side. The soldiers on the tanks blazed away with their weapons, and the quad .50s chugged out heavy suppressing fire as well. The communists returned fire with AK-47s, light machine guns, and B-40 rockets.

When the head of the convoy reached a traffic circle, the Marines collected their wounded. What followed was a running battle that lasted several hours as the convoy proceeded northwest on Duy Tan Street towards the compound. The convoy endured a steady gauntlet of enemy fire from both sides of the road as it pressed forward.

The convoy soon entered a causeway through rice paddies. Enemy troops were in two buildings, one on each side of the road, pouring fire into the convoy. Batcheller ordered the Marines to dismount. Some advanced behind the tanks and others through a muddy ditch alongside the road. The tanks swung their guns around and blasted the buildings.

Although the enemy in the buildings had been silenced, a communist machine gun in another location fired on the column. As Batcheller was dragging a wounded Marine to safety, he was struck in several places by an enemy machine gun. He had been hit in his forearm and both legs. In a severe blow to command, Batcheller was taken back to Phu Bai with other badly wounded Marines. Canley immediately took over. His job was to get Alpha Company to the MACV Compound with as few casualties as possible.

In response to a request from the embattled company for reinforcements, Lt. Col. Marcus Gravel, the battalion commander of 1/1, organized a reaction force at Phu Bai consisting of Golf Company from the Second Battalion, 5th Marines (2/5) to reinforce Alpha Company.

When Gravel arrived with Golf Company, he saw that Gunny Canley had firm control of Alpha Company. Canley was fearless and led by example. While others crouched to fire from cover, he strode around shouting commands.

“He stood up in the middle of firefights, [when the rest of us] would be hugging Mother Earth,” said John Ligato, who served under Canley at Hue. “His reputation was that he never ducked, and never crawled.” Canley ordered one of the trucks to take Batcheller and the other badly wounded Marines back to Phu Bai.

Canley’s Medal of Honor citation states that the gunnery sergeant braved “fire-swept terrain” to retrieve casualties that fateful day. When Batcheller was severely wounded, Canley “reorganized his scattered Marines, moving from one group to another to advise and encourage his men,” continues the citation. “Although sustaining shrapnel wounds during this period, he nonetheless established a base of fire which subsequently allowed the company to break through the enemy strongpoint.”

The two Marine companies reached the compound in the early afternoon. Cheers arose from the small number of Marines and soldiers inside the compound who had been waiting for relief. Gravel, Canley, and the other Marines surveyed the damaged walls that had been breached in several places by continued communist attacks throughout the morning.

Canley stayed at the compound for a week. He commanded the company for four days until Lieutenant Ray Smith, who commanded Alpha’s second platoon and had been left behind at Quang Tri with the other half of the company, arrived to take command of Alpha Company on February 4.

Canley and Sergeant Alfredo Gonzalez of the Alpha Company’s Third Platoon led the company on February 4 in a determined assault to clear 100 communist soldiers from the buildings of the Joan of Arc High School and Church near the compound. Since enemy fire swept the streets and paths around the complex, the Marines systematically blasted their way from one room to the next using C-4 explosives and M72 LAW rocket launchers. Once a wall was breached, a fire team cleared the room.

When the Marines stormed the church, enemy soldiers hiding in the rafters dropped grenades on them from above. Forced to withdraw temporarily, the Marines called up a tank to blast the roof. In a subsequent assault, Gonzalez was killed by enemy rocket fire. He received the Medal of Honor posthumously. At one point during the assault, Canley knocked out an enemy strongpoint using a satchel charge.

Canley again helped Alpha Company succeed in a difficult assault on February 6 against a strongly held South Vietnamese government building in Hue. On two occasions during the assault, he leapt over a wall and retrieved Marine casualties while exposed to enemy fire.

Canley was awarded the Navy Cross in 1970 for his action during the Battle of Hue City, but this was upgraded in 2018 to the Medal of Honor. It was presented to him during a White House ceremony on October 17 of that year.

The citation notes the “dynamic leadership, courage, and selfless dedication” he furnished not only while serving as the acting commander of Alpha Company, but also in the bloody assaults conducted on February 4 and February 6.

Of his experience in the Battle of Hue, Canley said in press interviews that he was never fearful during the firefights in which he participated. “My Marines, because they believed in me, would follow me to death,” he said. “Knowing that my Marines were 100 percent behind me, fear never existed.”