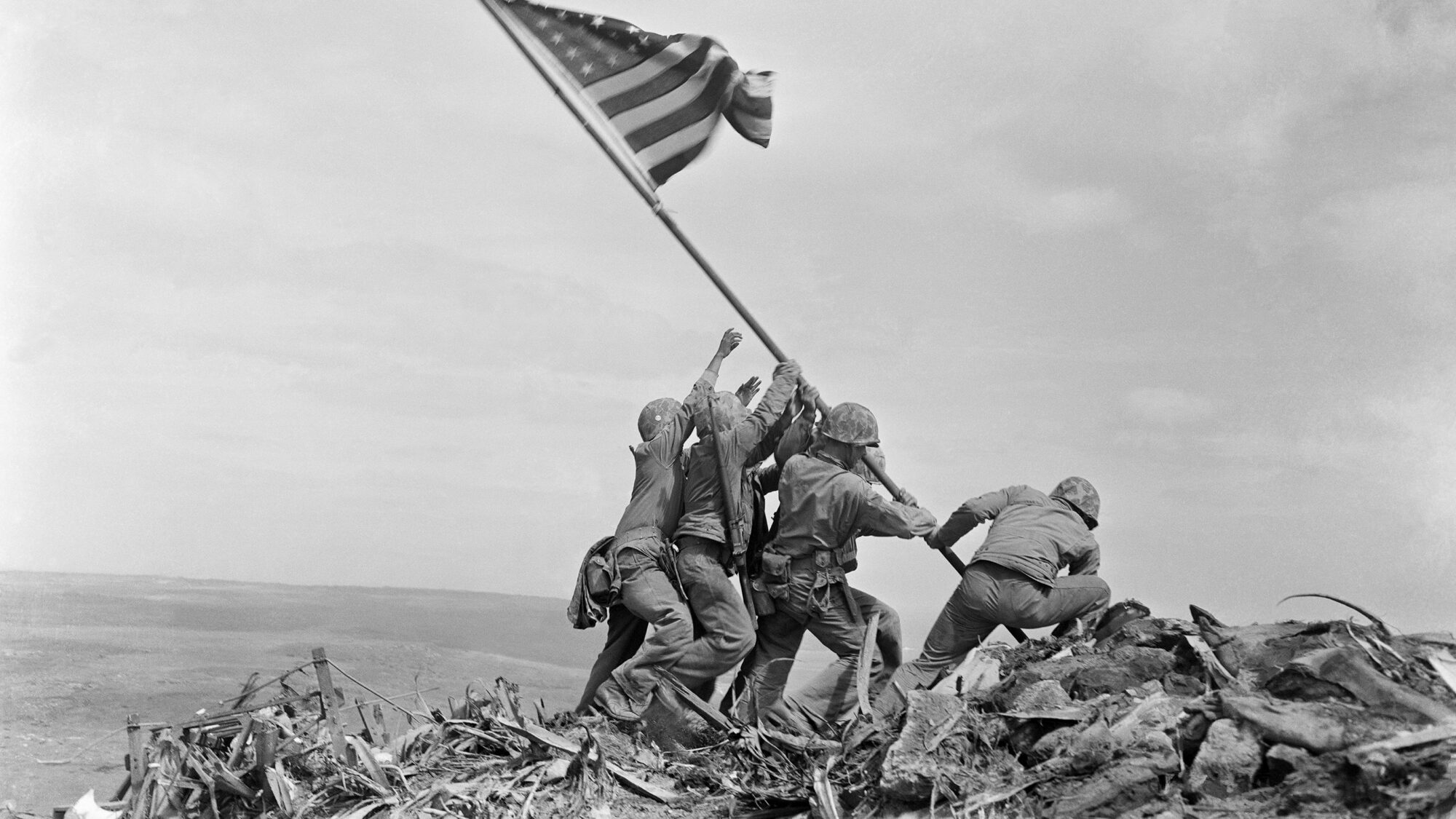 Perhaps no other image of Americans at war evokes such patriotic fervor as that of six servicemen raising the flag on the summit of 550-foot Mount Suribachi during the battle for the Pacific island of Iwo Jima. Associated Press photographer Joe Rosenthal captured the historic moment on February 23, 1945, four days into the fight that lasted more than a month and resulted in more than 25,000 U.S. casualties.

Flashed around the world, the photograph became an instant sensation, and the names of the men in it became household words in the United States. Three of them, Marines Harlon Block, Michael Strank, and Franklin Sousley, lost their lives before Iwo Jima was secured. The three others, Marines Ira Hayes and Rene Gagnon and Navy corpsman John Bradley, became celebrities, made numerous public appearances, and were special participants in war bond drives in the waning months of World War II.

For decades, the identities of these men were accepted as presented. Then, in 2014, two historians, Stephen Foley of Wexford, Ireland, and Eric Krelle of Omaha, Nebraska, began to raise doubts that Bradley is actually one of the men in the photo. Based on photographic evidence, they have concluded that the individual is actually a Marine named Harold Henry Schultz of Detroit, Michigan. Bradley, whose son James wrote the best-selling book Flags of Our Fathers that was later made into a major motion picture directed by Clint Eastwood, died in 1994. Schultz died in 1995.

Based on perusal of available photographs taken on the same day, Krelle and Foley do raise some doubt—enough to prompt the U.S. Marine Corps to launch an investigation. During their review, the historians recognized several apparent discrepancies.

The man who has been identified as Bradley for more than 70 years wears a cartridge belt with ammunition pouches and a pair of wire cutters hanging from it. Bradley was a corpsman and would probably not have been armed with an M1 rifle or carbine. Other photos show him wearing a pistol belt without ammunition pouches. Wire cutters would probably not have been issued to medical personnel. In addition, Bradley wears cuffed pants in several photos taken the day of the flag raising, while the man in the iconic picture is wearing uncuffed pants. The individual in the famous photo is also wearing a cap beneath his helmet; its bill is visible. No other photos of Bradley taken that day show him wearing a cap.

In 2014, Krelle commented to the Omaha World-Herald newspaper, “People can hold onto what they have always known in the past. But to me, the photos are the truth.”

In May of this year, the Marine Corps issued a statement, which read in part, “The Marine Corps is examining information provided by a private organization related [to] Joe Rosenthal’s Associated Press photo of the second flag raising on Iwo Jima…. Rosenthal’s photo captured a single moment in the 36-day battle during which more than 6,500 U.S. servicemen made the ultimate sacrifice for our Nation and it is representative of the more than 70,000 U.S. Marines, Sailors, Soldiers and Coast Guardsmen that took part in the battle. We are humbled by the service and sacrifice of all who fought on Iwo Jima.”

The Marines have not released an expected date for the conclusion of their inquiry.

In an interview with the Associated Press, James Bradley said that he was shocked to learn of the investigation. “I’m interested in facts and truths, so that’s fine,” he remarked, “but I don’t know what’s happening.”

In the coming months, no doubt, other experts will review the photographic evidence of the famed flag raising along with any other information available to obtain positive identification of the sixth man. Will history be rewritten?