Like so much of German society, automaker Mercedes-Benz was co-opted by Adolf Hitler and the Nazi Party during World War II.
No comments
Categories: WWII

Few would argue that Daimler-Benz is one of the most prominent and highly regarded motor vehicle manufacturers in automotive history. Its founders, Gottlieb Daimler and Karl Benz, long have been recognized as pioneer inventors of the gasoline-powered motor vehicle, first developed in 1886. But as the modern transportation industry quickly evolved in Europe after World War I, the company that would become Daimler-Benz and build vehicles named Mercedes-Benz found itself hijacked by a radical new political movement, one that exploited the company’s excellence in engineering and manufacturing. As it did with so much of German industry, the Nazi regime would take advantage of the automaker for its own brutal and aggressive agenda.
[text_ad]

Cameras in the Nazi era focused on numerous motor vehicles produced in Germany during those troubled times. The fascist fervor leading to World War II invited much media attention. Countless pictures of Adolf Hitler giving the Nazi salute while standing in one of his Mercedes-Benz vehicles still survive, providing a glimpse of both engineering excellence and political dysfunction that co-existed at the time.

The Height of German Engineering

Among the luxuries Hitler enjoyed as head of the Nazi Party were the best cars that Germany could produce. Those cars happened to be Mercedes-Benzes, some of the finest and best-designed automobiles in the world. The affiliation between Hitler and the auto manufacturer would span the better part of two decades. Mercedes-Benz would build many vehicles and other equipment for the German war effort.

From the beginning of the Industrial Revolution, there was little doubt that German engineering was in a position of leadership and dominance. Although Germany’s manufacturing and industrial output could not match that of the United States, the fact that automobiles were invented and first developed in Germany signified a true knack for imaginative engineering that would find real competition in only few other countries—the United States, Great Britain, France, Belgium, Czechoslovakia and Italy—in the first half of the 20th century.

The Origin of the Name “Mercedes”

The name “Mercedes” originated with one of the company’s sales agents, Emil Jellinek, who was unsatisfied with short-wheelbase Daimler-powered cars at the turn of the century. Jellinek, the Austro-Hungarian consul to Germany, had a taste for speed. Moonlighting as a sales agent for Daimler in Nice, France, Jellinek commissioned a new model, promising to personally buy the first 36 units, provided that his eldest teenage daughter’s name graced the car. He even changed the family name to Jellinek-Mercedes in 1903. The three-pointed star emblem, inspired by Gottlieb Daimler, was meant to symbolize motor transport for land, air and sea. 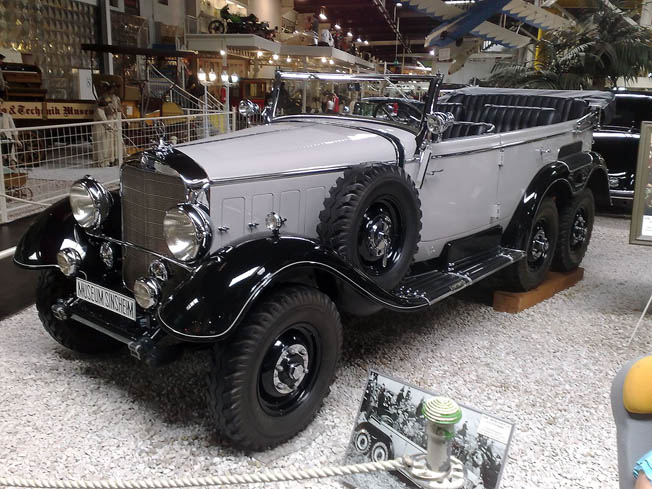 Ferdinand Porsche joined Benz and became chief engineer in 1923. Because of the severe depression throughout Europe, the two enterprises merged in 1926 to become Daimler-Benz. The cars built at Daimler were soon called Mercedes-Benz as well, sometimes abbreviated MBZ in automotive literature. Porsche created the supercharged Mercedes series of which the SSKL (Super Sport Kurz Leicht) became the epitome of performance. Its distinct sound was attributed to what was called the “elephant blower” supercharger, which produced a scream as it nearly doubled the horsepower.

In 1929, Dr. Hans Nibel became the new chief engineer, developing the 500K and 540K Mercedes-Benz, which became legendary for their performance and aesthetic qualities. Hermann Ahrens was the in-house designer of coachwork at Sindelfinger, where MBZ V-12 DB600 engines were built later for such Luftwaffe aircraft as the Messerschmitt Me-109.

The Cars for Hitler’s Entourage

Hitler had reason to be proud of his country’s best automobile. In 1939, when Nazi Germany and the Soviet Union signed a pact of non-aggression, Hitler gave a supercharged Mercedes roadster with a rumble seat to Soviet dictator Joseph Stalin. Once the non-aggression pact was broken by Germany’s invasion of the Soviet Union in 1941, Stalin refused to use the car and gave it to one of his generals. It survived the war and was sold to a man in Sweden, who then sold it to an American after World War II. The car ultimately turned up in Arizona.

Hitler used a total of five 770K cabriolet touring cars for his entourage in Germany. The fact that Archduke Franz Ferdinand was assassinated in Sarajevo in 1914 while riding in an open car may have influenced Hitler to always use enclosed MBZ saloon cars unless he was showing off in a parade. That precaution bore itself out after the assassination of General Reinhard Heydrich in Prague in 1942 in an open car, after which incident Hitler transmitted an order for 20 armored MBZ 540K saloon cars. Hitler had already switched to heavily armored limousines and earlier had ordered two more 770K models.

The 770K model was known as Grosser Mercedes Offener Tourenwagen. With its 7655cc single-overhead-cam, dual-carburetor, straight-eight motor, which produced 230 hp when the supercharger kicked in, the vehicle was capable of reaching120 mph, even though it weighed 10,000 pounds. Its huge weight was partly due to the addition of 6mm floor armor and 3mm hardened door armor, plus 40mm thick bulletproof glass.

There were three “jump” or pull-out seats behind the driver’s seat, allowing the car to seat a total of nine persons. Entirely upholstered in leather, it had a raised, five-inch-high floor on the right to make Hitler appear taller when he stood. The front seat folded back to give him more room while standing in that position. The car had a 51-gallon gasoline tank and a 150-mile range but could attain three miles per gallon around town. The car also featured four-wheel, independent-coil suspension, dual- system power brakes and 8.25 x 17-inch tires. Hitler ordered another completely enclosed 770K Mercedes in 1943, equipped with armor-reinforced steel roof in addition to the other armor and amenities of his previous cars.

An Explosion of War-Era Production

Hitler wanted to convey to the world the superiority of German engineering. At the time, Germany lagged behind in motorization. The United States had 1.4 people per car, while there were 49 people per car in Germany, which was even behind France and Great Britain. Hitler promised the German people that he would quickly develop the auto industry and began a rapid construction program of the autobahn highway system, the first of which was opened in May 1935. With support from the government, Mercedes-Benz doubled production from 6,000 cars in 1932 to 12,000 in 1934. By 1935, that number had more than doubled again to 25,000.

Two years later, the MBZ factory helped build 30 prototype Volkswagens, which were used for testing prior to series production. Instead of being mass produced as the “people’s car,” the VW was turned into a military vehicle during World War II, and the tens of thousands of Germans who paid into accounts for their KdF Wagens never got to sit behind the wheel of one on the road.

While Mercedes-Benz limousines embodied extravagance and MBZ-subsidized motor sports found success, at the other end of the spectrum Daimler-Benz developed several models of military vehicles, including trucks and half-tracks, in preparation for the war that Hitler and his cronies were planning during the late 1930s. From 1938 to 1942, Mercedes built 19,000 model 170VK vehicles. These were powered by the Daimler-Benz 1700cc M136 four-cylinder motor and were used as staff cars, signal-communication vehicles and maintenance/repair vehicles. A light scout car was built as early as 1934.

Mercedes-Benz built the G3a and G4, which were both 6×4 all-terrain vehicles. These were powered by an in-line six-cylinder or an eight-cylinder motor, respectively, the latter with up to 115 hp. There were 2,000 of the G3a models built, and they were used for a myriad of special purposes: as survey trucks, telegraph vehicles, mobile flash-ranging stations, sound-ranging posts, weather stations, mobile print shops, observation scout vehicles, radio communication vehicles and all-terrain transport. The G4 passenger model was a cabriolet and weighed 3.5 tons. It was nicknamed Bonzenkubel, meaning “bigwig bucket.” Only 72 of these were built, and Hitler used one as his staff car for various excursions and inspections in the field.

Gearing Up For the War

Gearing up for war, Mercedes became an important contributor to the arsenal of trucks needed by the Nazis for various purposes. Gaggenau became the main plant for this purpose at Daimler-Benz. Under the Schell Plan, most major German vehicle manufacturers were united and responsible for producing standardized, light all-terrain transports. Mercedes-Benz Types L1500, L1500A and L1500S were three variants of these vehicles, which were built as a 4x4s. A stood for Allrad-Antrieb, or all-wheel-drive, and S for Standard-Antrieb, or rear-wheel-drive. These were powered by a 2594cc four-cylinder motor. The 4×4 was used primarily as a troop transport.

MBZ also built the Type L3000 A and S, most of which were three-ton-capacity supply trucks, powered by a 75hp 4849cc four-cylinder motor. Daimler-Benz built approximately 8,000 of the trucks. Mercedes Transport Vehicles Types L/Lo 200/2500/2750/3000/3500 and 3750 all resembled one another but had different engines, lengths of bed and wheelbase. There was also the LZ 4000/6000/8000 series semi-tractor, which had the same appearance from cab forward as the L/Lo series.

The heaviest MBZ trucks were the Type L6500 4×2 trucks produced by MBZ from 1938 to 1940 and rated at 6.5 tons, with standard two-axle rear-wheel-drive. Only vehicles of the L4500 A series were built as Allied bombing and changes in strategic planning by the German high command halted production of most other Mercedes-built trucks by the end of 1943.

At the start of World War II, all privately owned vehicles with engines over 1000cc and rear-wheel drive were confiscated by the Nazis. This included all MBZ cars and trucks, which were considered “supplemental vehicles.” Most of the MBZ cabriolets became staff cars for the Nazi Party. The Wehrmacht also took Mercedes-Benz omnibuses and put them to use as troop transporters or laboratory vehicles.