One of the theaters of war in the Hundred Years War between France and England was the Duchy of Brittany in northwestern France. At question was the succession to control the duchy which was disputed by English-backed John Montfort and French-backed Charles of Blois.
[text_ad] 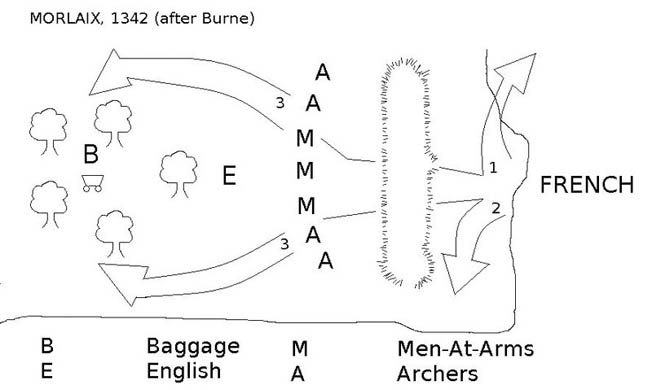 By the time of Northampton’s arrival at the port of Brest, the French had laid siege to a number of Breton strongholds in western Brittany, among which was Morlaix. The town on the English Channel was protected by a wall, and it had a good natural harbor. Therefore it was a significant objective since it could serve as a makeshift port.

The March to Morlaix

Northampton marched to relieve Morlaix arriving in the area in September. Blois, who was campaigning elsewhere in Brittany, promptly marched to attack Northampton. Northampton had detached some of his troops, and he arrived at Morlaix with about 2,400 men. Sources on the battle clearly exaggerate the size of the French army given the size of French forces at other clashes at the time. Therefore, it is unlikely that Blois commanded a French army of 30,000 as the sources would indicate; instead, he probably had about 9,000 men and outnumbered the English by more than three to one.

Northampton ordered his men to deploy on the slope of a hill with a deep woods behind him. He was determined to fight a defensive battle against the larger French army. The earl ordered his knights and squires to dismount. He deployed his archers on the flank. The English had used this same tactic to defeat the Scots in the late 13th century, and they were determined to use it against the French. To further improve his strong defensive position, Northampton had ordered his men to dig pits in front of their position and cover them with large branches from the woods. 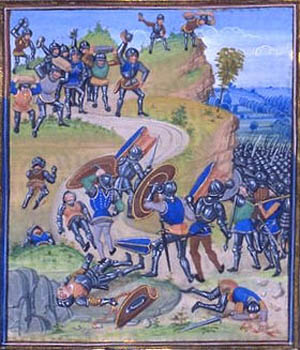 Blois arrived on the morning of September 30 with three “battles” (the medieval equivalent of divisions) and assessed the English position. The vanguard, commanded by Burgundian Geoffrey de Charny, charged the English position but was cut to pieces by the well-trained archers before it reached its objective. The sources disagree whether the vanguard attacked on horseback or dismounted, but the weight of evidence favors the former at that stage of the Hundred Years War.

English archers not only fired at riders, but also at the horses to unsaddle the riders and force them to fight on foot. The iron-tipped arrows, which were capable of penetrating mail, stopped the French vanguard before they reached the concealed pits. Charny was unhorsed and captured.

Next, Blois ordered his second “battle” to charge the English position in hopes that it might be able to penetrate the English line. The mounted men advanced slowly at first in a trot. When they began to come under fire from the archers, they galloped toward the English line. Suddenly the mounted knights in front plunged into the pits. Trapped in the obstacle, they were easy targets for the skilled and steady English archers.

Blois, who probably was furious by this time, ordered his third battle to attack the unbroken English line. Northampton, who was aware his archers had run out of arrows, ordered his troops to undertake a fighting withdrawal to the dense wood lot at the top of the hill. They stayed in the woods for several days until the larger French army, despite its heavy casualties, withdrew. At that point, Northampton returned to the business of besieging Morlaix. The Breton Civil War lasted for 23 years, ending in 1364.