Was Emperor Showa ('Hirohito' as he is typically referred outside Japan) a warmonger, pacifist, or both?

He was the longest-reigning monarch and head of state in the 20th century, and the third-longest in history behind King Louis XIV of France (72 years) and England’s Queen Victoria (64 years). Indeed, the 62 years of Japan’s late Emperor Hirohito on the throne of Japan spanned American presidencies from Calvin Coolidge to Ronald Reagan, from one conservative era to another.
[text_ad]

Those same six decades of his reign witnessed the rise, fall, and subsequent rise again of Japan itself, from one of the world’s great military powers, to the depths of bitter defeat, followed by a rebirth from the ashes of two atomic bombs and an economic revival unprecedented in modern history.

Perhaps Hirohito’s most notable achievement is that he managed to stay on the throne of his fathers at all. At one time, he was linked in public opinion around the world with his wartime allies, Nazi dictator Adolf Hitler and Italian Fascist ruler Benito Mussolini.

Both of these leaders met violent deaths at the end of their collective war in 1945, while the slight, diminutive emperor alone survived to live and preside at the side of his former enemies.

Moreover, today, while the former imperial and royal ruling houses of the Savoys, Bonapartes, Bourbons, Hohenzollerns, Hapsburgs, Romanovs, and many others have all passed into history, Hirohito was succeeded as emperor upon his death at age 87 by his son and heir, Crown Prince Akihito.

Indeed, even after a lost war followed by two devastating atomic bombs on the homeland—dropped in part because Hirohito refused to step down—he managed to escape overthrow and trial by his own people.

How was all this possible, and even achieved?

Not the Shy, Inexperienced Ruler He Was Made Out to Be

Clearly, Hirohito was something more than the postwar image promoted by the West. He was not a shy, young, inexperienced ruler out of touch with his people and dominated by his own diplomats, politicians, generals, and admirals during World War II.

In this scenario of fable and fancy, the emperor opposed the Japanese militarism of the 1930s that saw the rape of China and Manchuria, as well as the plot to attack the United States and the other Western nations in late 1941, beginning with the sneak attack at Pearl Harbor. Then, at the last minute, after the atomic bombs had been dropped, the reluctant commander in chief stepped forward, asserted his authority at last, and ended the war with secret speeches in private and a public radio broadcast to his people.

No, in truth, Emperor Hirohito likely ruled his nation from the very beginning of his long reign, made the major political, military, and naval decisions of the 1930s and 1940s in concert with his courtiers, and, when the game was up and in order to save both himself and his dynasty, delivered them up to their enemies for both trial and execution. So strong was Hirohito’s hold upon them that they agreed willingly and went to their own ignominious deaths and disgrace without betraying his trust, just as had thousands of his soldiers, sailors, and airmen in scattered battles across Asia and the Pacific.

Paving the Way for “A Grand Peace”

Indeed, an entire nation bent on mass suicide in 1945 and willing to fight on against the whole world and almost certain defeat obeyed his imperial will unflinchingly and accepted what to them was the unacceptable—surrender and humiliation— because he asked them to do so.

“We are keenly aware of the inmost feelings of all ye, Our faithful subjects,” he intoned. “However, it is according to the dictate of time and fate that We have resolved to pave the way for a grand peace for all the generations to come by enduring the unendurable, and suffering what is insufferable.”

The emperor saved what was, for him, the most important news for last. “Having been able to safeguard and maintain the structure of the Imperial state, We are with ye, Our good and loyal subjects … Unite your total strength to be devoted to the construction for the future…and keep pace with the progress of the world…”

As millions of Japanese wept, the broadcast ended.

An Oblique Statement of Surrender

In the West, the day before had been one of delirious rejoicing as V-J Day had been celebrated, and the real significance of the defeated emperor had been overlooked — but not in Japan.

There, Hirohito’s good and loyal subjects understood precisely what he meant. Japan’s imperial conspiracy to conquer the Pacific had failed dismally. Hirohito, however, had not formally admitted that fact in his oblique surrender announcement. Nor did he when he met the very embodiment of his conqueror, General Douglas MacArthur, on Sept. 27, 1945, at the latter’s headquarters. He even stated he felt his country had been justified in fighting the war. He was, no doubt, referring to the U.S. oil embargo that had precipitated his Navy’s call for the Pearl Harbor strike on December 7, 1941. 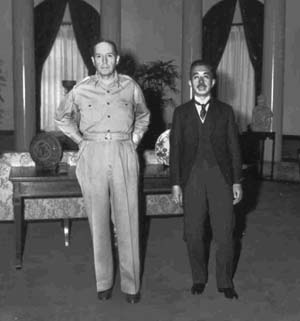 In his memoirs, MacArthur called Hirohito the “First Gentleman” of Japan, because the emperor had offered himself up for trial, which many in the West at that time believed to be both fitting and proper. MacArthur was right, but for a different reason.

The emperor had ruled Japan in fact since at least 1921 when he had become regent for his ill father, or for 24 years by 1945, and he meant to continue doing just that until he died.

When he died on January 7, 1989, his family still retained the very same Chrysanthemum Throne he had occupied officially in 1928, in the identical Imperial Palace that the Allies failed to bomb during all of World War II. He commanded the same respect from his devoted people that he always had, renunciation of his “divinity” after the lost war notwithstanding.

Hirohito’s people still understand this now, just as he knew that they would then. They understood, too, his words about working for the future. Today, the sign of the Imperial chrysanthemum, adopted formally in 1889, still adorns the dynastic cars.

The rising sun flag flutters over the reborn, if admittedly smaller, Japanese Navy, ironically recreated at the express wish of those same Americans who helped destroy its parent more than six decades ago. The Japanese Army, now called the Japan Self-Defense Force, marches again under the flag of a fiery sun ball. The nation’s economy makes Japan, after the United States, the former Soviet Union, and the People’s Republic of China, one of the strongest powers on Earth today.

Far from being a quiet, cautious monarch led by the nose by his more aggressive advisers, Hirohito actually directed his country’s massive arms buildup since at least 1929. The U.S. government knows this to be true but has continued to maintain the historic falsehood because succeeding U.S. administrations recognized what the emperor had long ago known—that they would need his help as a counterbalance to first Soviet and then Chinese communism in Asia.

Post-War Appearances and the Right of Succession

Hirohito, who before and after Pearl Harbor reviewed his marching legions clad in Imperial Army uniform and mounted on White Snow, his gorgeous stallion, knew that he could never defeat the United States and its allies in a long war. It must be done quickly. Thus came the sneak attack at Pearl Harbor, which was hoped would destroy the U.S. Pacific Fleet. Hirohito also hoped that the Nazis and Fascists would hold onto their conquests years longer than they did. He badly miscalculated and did not foresee that the Soviets would destroy the Germans and that Pearl Harbor would spur the Americans on to final victory. He also did not foresee the development of the atomic bombs that were ultimately used against his nation.

Yet, he managed to save his dynasty’s right of succession over the generations and to keep himself on the same throne he had previously occupied. And so, the mythical concept of Hirohito, the British-style constitutional monarch of the postwar period, was born out of the ashes of defeat. He shed his uniform and dress samurai sword for the stiff, formal tuxedo attire that he wore to meet General MacArthur.

The busts of Napoleon and Darwin, symbolizing conquest and struggle, disappeared quietly from behind his desk. Another, of Abraham Lincoln, appeared, for the political emperor understood all too well the symbols and trappings of office and power.

His peace faction, created quietly in late 1941 and early 1942 even as the Japanese military reaped undreamed of victories in the Pacific, planned for what to do in case the great gamble fell flat. Thus it was that this strategy was in place and ready to be unveiled in summer 1945.

Hirohito “suffered the insufferable” as his top leaders, Konoye, Sugiyama, and Tanaka, committed suicide or were executed like Tojo, Homma, and Yamashita. These were the men who had acted at his orders and direction, but he allowed them to expire in his behalf so that the imperial house might survive. After the war, Japanese sources revealed that the nation was prepared to fight on even after the atomic bombings of Hiroshima and Nagasaki if the Allies had not guaranteed Hirohito’s survival as emperor.

Gradually, the respectability Hirohito lost through his reckless war policy returned to Japan and to his own person. In 1971, he toured Europe after an absence of 50 years. He received Richard Nixon and Gerald Ford in Japan, as well as Queen Elizabeth II. However, he did not meet Earl Mountbatten of Burma, who refused to allow any Japanese to be present at his state funeral because of the atrocities committed against British Empire forces during the war.

Incredibly, as late as 1975, three decades after the war, Japanese soldiers were still straggling out of Pacific jungles where they had chosen to stay and fight on alone because they had not known of his order to surrender. 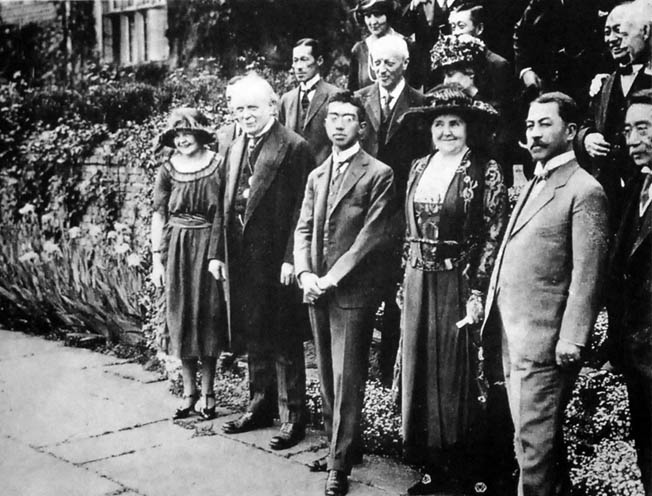 Clearly, this Asian monarch was an extraordinary man, a capable ruler of great gifts and imagination and charisma, and not the passive wimp that creative postwar Allied propaganda would have us believe, a man kept on his throne by the Allies themselves because they understood his unique hold on the Japanese people, a ruler they needed as a future ally. Today, Japan remains a world-class industrial giant, a state with a powerful military presence in Asia once more, and a bulwark against Chinese and North Korean communism.

It has all worked out as the monarch’s late adviser, the Marquis Kido, predicted in a top secret memo of December 3, 1940, a full year before Pearl Harbor: “After this world war, the U.S. and U.S.S.R. may … emerge unhurt, when all other nations are devastated … Our country may face great hardships.

“However, there is no need to despair. They will grow careless and corrupt. We will simply have to sleep in the woodshed and eat bitter fruits for a few decades. Then, when we have refurbished our manliness inside and out, we may still achieve a favorable result.”