There is much to see when touring the Battle of the Bulge, though 75 years on, some of it may be hard to find.

The Battle of the Bulge lasted an entire month, and was fought over almost the entire Grand Duchy of Luxembourg and half of Belgium, yet finding all of the battlefields and historic sights is a bit more difficult than locating the D-day beaches. While there are plaques, statues, and a few museums dedicated to the campaign, they are all privately funded and are not complementary of one another in the way they might be under a national park-type system.

There are places to visit for every division that fought in the Ardennes campaign, but they are too numerous to mention. To fully experience the Ardennes Offensive, there are two routes to take through Belgium. The northern route takes one through the battlefields of German Lt. Col. Joachim Peiper’s armored spearhead as well as the defeat of the American 106th Infantry Division outside St. Vith. The southern route reveals the defense of Bastogne and its relief.

How to Get Around Brussels

To get to Belgium and the Bulge sites, it is best to fly into Brussels. If not on a specific tour, a car rental is needed since there is no public transportation to most of the sites. From the airport, the location of Peiper’s initial attack near Losheimergrab on Route N 632 is a 150-kilometer drive. It will take most of a day to get there. Turn south onto N 626, and west on N 658 to reach Honsfeld. This is where Peiper’s men killed 19 American POWs and stripped the dead of their shoes. From there, continue north to Büllingen, to see the spot where Peiper’s men killed an additional 50 POWs. Piper was setting a pattern for the brutality of his attacks. It culminated at Stavelot, 25 kilometers east of Büllingen, where his men gunned down 150 POWs, killing 86 in the infamous Malmedy Massacre. A large memorial stands at Stavelot, across from the field where the massacre took place, and it contains the names of all the Americans killed. There is also a museum down the street from the massacre sight which includes a restaurant. Continuing west to Trois Points, one can see where Piper shouted, “The damned engineers!” when the bridge over the Lienne creek blew up just as he was about to cross it. There is a memorial on the bridge to the men of the 51st Engineer Combat Battalion, who blew up the bridge. From Trois Ponts, travel north about five kilometers to La Gleize and visit the museum, the only place in Europe where one can see a Königstiger (King Tiger) tank on display. Inside the museum are dioramas, historic photos, and both German and American equipment. There is so much equipment, in fact, that it seems the owner simply went into his front yard after the battle and scooped up armfuls of the debris. The museum is the best place to either begin or end a tour.

St. Vith, where the Germans pushed back the 7th Armored Division and captured most of the 106th Infantry Division, can be reached by heading south on E 421 about three kilometers east of Stavelot. There is no museum for this part of the campaign, only memorials and woods still filled with the litter of combat. St. Vith has been rebuilt from the rubble. After the Germans captured the town, it was repeatedly bombed by the Allies. In the center of town a simple memorial remembers the 106th on the site of the division headquarters. Heading east and then north along N 626 brings visitors to memorials for the combat engineers who defended the area, as well as Lieutenant Eric Fisher Wood, who fought a one-man battle against the Germans after his division was overrun. Turning east at the town of Meyerode, another memorial can be seen. This one is to the 333rd Artillery Battalion, a black unit captured by the Germans, who killed 11 of it’s members—the Wereth 11.

From there, continue east and turn south at Andler onto N 26. About a kilometer south is the area where the 422nd Regiment of the 106th surrendered to the Germans. The road, packed with German vehicles in 1944, came under heavy American fire before the surrender. Further south is where the 423rd Regiment surrendered. The woods are still littered with the debris of war, and visitors are encouraged not to touch anything for fear that some of the ordnance could be dangerous. Upon reaching the town of Bleialf, drive southwest to Brandscheid and turn left onto the Schnee Eifel. All along this road, in the woods, is where the 106th was spread out on December 16, 1944. The end of the tour is where the Battle of the Bulge began. 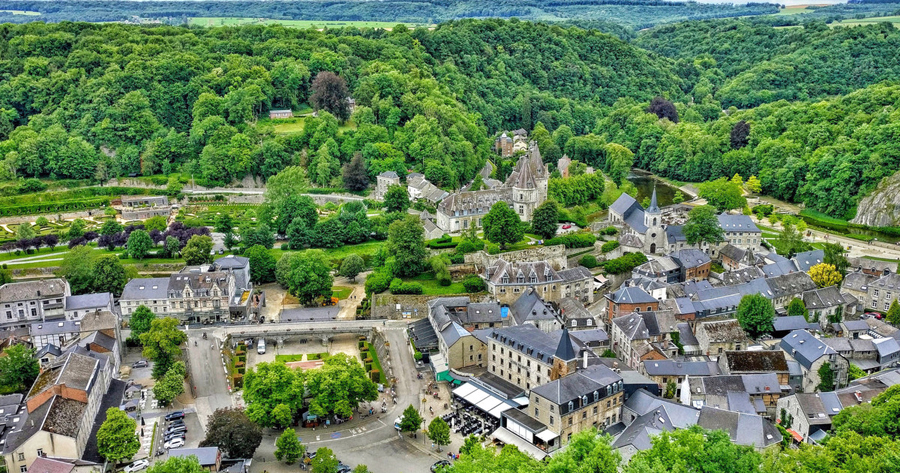 The southern part of the Bulge is the easiest to follow. Any tour should start in the town of Bastogne, the strategic crossroads where the 101st Airborne Division made its famous stand against Adolf Hitler’s onslaught. Alongside every one of the seven roads leading into the town sits a Sherman tank turret, most with battle scars. In the town’s square, now called McAuliffe Square, is a bust of General Anthony McAuliffe and a Sherman tank with the insignia of the 11th Armored Division. Also within the square are some excellent restaurants and a visitor’s center. In the northern section of Bastogne, up the Rue de Neufchateau, the Mardasson Memorial is the best place to get acclimated with the campaign. The memorial towers three stories on top of a hill that gives an excellent view of Bastogne and the surrounding area. Each of the memorial’s five points explains a different element of the siege of Bastogne. As of 2014, the museum there has been under construction after being hit by lightning. Near the Mardasson stands the final victory marker, which some call a Patton marker, representing the last area to be liberated from the Germans. The marker, numbered 1,147, is the last—the first being at Utah Beach—and subsequent markers stretch along every kilometer through France and Belgium in memory of General George S. Patton’s sweep through Europe. After the liberation of Bastogne, Patton’s Third Army was no longer an army of liberation but of invasion as it entered Germany. 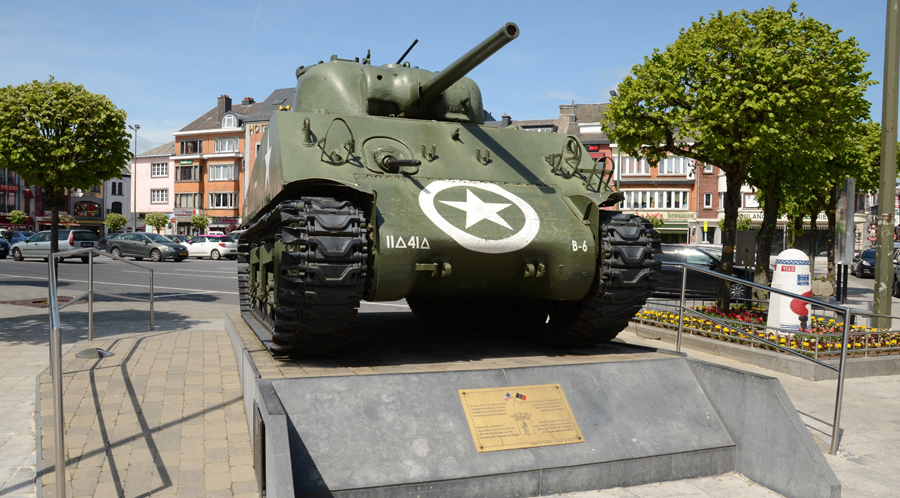 While Bastogne was the focal point of the 101st Airborne Division’s action, the towns around Bastogne saw most of the fighting. Unfortunately, there are few, if any, markers to explain their significance. Noville saw some of the first fighting when Task Force Desobry of the 10th Armored Division fought off an attack, providing time for elements of the 101st to get into position. There is a small memorial near the town’s church in memory of civilians killed by the attacking Germans, who had found pictures of the townspeople celebrating the arrival of the Americans. The Germans picked out the people in the photographs and killed them. Also north of Bastogne is the Bois Jac forest, where Easy Company, 506th Parachute Infantry Regiment, of Band of Brothers fame, defended Bastogne and attacked Foy after the siege was lifted. A memorial to those killed in Easy Company stands on the road near the unit’s foxholes. The climax of the Bastogne campaign came when Patton’s 4th Armored Division linked up with the 101st south of Bastogne the day after Christmas, 1944. The best way to follow this action is to take roadway N 4 south about three miles, passing Assenois, to the intersection with signs for Sibret. It was here that Lt. Col. Creighton Abrams decided to attack directly into Bastogne instead of proceeding to Sibret to guard the division’s left flank. A small black memorial within a larger memorial to World War I marks the spot. Driving north on N 4, the town of Assenois, where the Germans made their last serious stand against the 4th Armored comes into view. Upon entering the town a memorial honoring Sergeant Jimmy Hendrix can be found on the first left. Hendrix earned the Medal of Honor for capturing two German anti-tank guns and saving a soldier from a burning halftrack. Continuing out of Assenois and driving north approximately one kilometer, visitors come to a German bunker on the right side of the road. It was here, after shelling the concrete bunker, that tankers from the 4th linked up with paratroopers of the 101st, lifting the 10-day siege.

A tour of Belgium would not be complete without a trip to Houffalize, approximately eight kilometers north of Noville. This is where the northern and southern forces of 12th Army Group met on January 16, 1944. A German Panther tank stands in the town’s center. While the relief of Bastogne represented the relief of the Bulge, Houffalize is the end of the entire campaign. The Battle of the Bulge tour takes at least four days to complete. Accommodations in the small towns are comfortable and affordable, the local cuisine is simple and filling, the beer always good and the people friendly. Despite this, the serious historian will be a mess. The battlefields are muddy and not always easy to access, rain is the norm, and the temperatures are cooler than the rest of Western Europe. After trekking around the woods all day, the food, drinks, and rooms seem even better.

2 thoughts on “Touring the Battle of the Bulge”