The two types of aircraft responsible for sinking the Prince Of Wales and Repulse represented the best of Japanese aviation in 1941. The older, more numerous type consisted of Mitsubishi G3M twin-engine aircraft, known simply as “Nells” to Allied pilots. (The Allies gave boys’ names to Japanese fighters and float planes, girls’ names to Japanese bombers and recon planes.) Manned by a crew of five, the Nell first flew in July 1935 and went into widespread production the following year.
[text_ad]

Defensive armament consisted of three 7.7mm machine guns. Early versions were able to obtain a maximum speed of 188 knots and had an exceptional range of over 2,200 miles—improvements later in the war considerably extending both. Although chiefly a high-level bomber, the G3M was adapted to carry an 800-kg torpedo in an antishipping role. G3Ms were little known in the West, being used chiefly by the Japanese against the Chinese, although they achieved a notable distinction on August 14, 1937, when a force of them based in Formosa attacked targets in mainland China 1,250 miles away, thus realizing the first transoceanic air attack in history.

G3Ms remained in service throughout the war, though by 1943 they were mostly employed in second-line duties or used as transports. In all, 1,048 were eventually produced, 636 by Mitsubishi and an additional 412 under license by Nakajima.

It was Nell’s successor—the Mitsubishi G4M or “Betty”—that went on to become one of the most famous Japanese aircraft ever produced. Serving in almost every Pacific battle in every role imaginable, the G4M became a powerful symbol of Japanese strength and airpower second only to the vaunted Zero.

Charged by the Imperial Navy in September 1937 to develop a new, more modern twin-engine bomber, Mitsubishi was faced with challenges that pushed the limits of both speed and range. It more than rose to the challenge and produced what was then considered the best land-based naval bomber in the world. The G4M won its honors through a combination of high-powered engines, a clean low-drag airframe, and minimal weight. Because long range was essential, the wings were designed to include fuel tanks; but to hold down weight in favor of range, the designers omitted armor or a self-sealing feature for the tanks. Similarly, there was no armor protection for the crew, and defensive weapons were severely restricted. The fuselage, basically a circular tube, was of a diameter sufficient to accommodate an uncluttered bomb bay beneath the center wing-section, intended to make it easier for the crew to move about the aircraft during long, over-water flights. 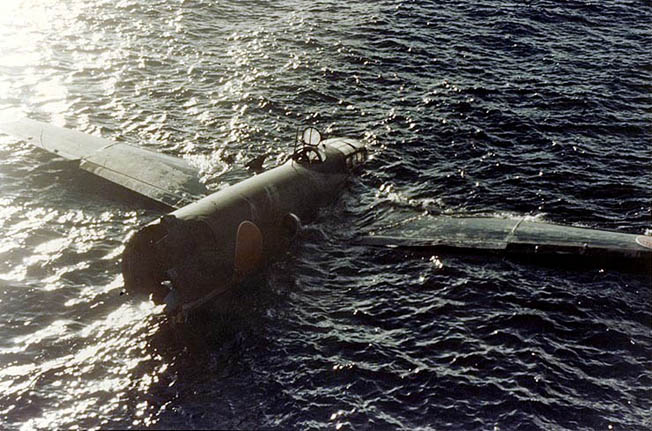 The Betty first flew in October 1939 and was manned by a crew of seven. Early versions of the aircraft as deployed against Force Z could fly at up to 230 knots (265 mph) with a maximum range of 3,250 miles. It carried one 20mm cannon and four 7.7mm machine guns. It could hoist either one 800kg torpedo or 1,000kg of bombs.

Despite the G4M’s speed and exceptional range, it’s fatal flaws were the lack of armor and self-sealing fuel tanks, thus making the plane especially vulnerable to enemy fire—often one or two bursts were all that were required to set it aflame. In fact, it became known derisively to Allied pilots as the “Flying Cigar.” Ironically, as the war continued and the Japanese were pushed back closer to their homeland and interior Pacific bases, the need for range diminished.

The Betty’s most outstanding success came in the early days of the war with the sinking of the Prince Of Wales and Repulse, the first capital ships ever to be sunk by air attack while at sea. In fact, only three other battleships have ever been destroyed under such conditions: Japan’s own Yamatoand Musashi late in the war, and the Italian battleship Roma in the Mediterranean in 1943.

In all 2,416 Bettys were produced by Mitsubishi and saw action in almost every engagement in the South Pacific. They also served as transports and special-attack aircraft. Admiral Isoroku Yamamoto was aboard a Betty when it was shot down in 1943. Late in the war Bettys were used as Kamikazi aircraft. Indeed the Betty, which was there at the very start of the conflict, was also there at its end, being used as special transport aircraft for the Japanese delegation who arranged Japan’s surrender to the Allies in August 1945.