The British Cromwell Tank: What Made it Such a Success

The British Cromwell tank would eventually prove to be one of the most successful WW2 vehicles made by the U.K. But how was it developed?

At the outbreak of World War II, the British War Office assumed that conditions on the Western Front in France would be the same as those experienced in the Great War of 1914-1918. It therefore wanted a very heavy infantry tank that would be invulnerable to known anti-tank guns of the time. Further, it wanted a tank with a wide trench crossing capacity, and able to negotiate ground churned up by shell fire. The design arrived at was the A20, essentially a refinement of the “lozenge” shape tanks built by the British in 1916-1918. Fitted with a 2-pounder main gun, trials for the new machine began in June 1940.

With the need to add major modifications to the design due to mechanical faults, the now renamed A22, Infantry Mark IV tank, went into production in 1942. Referred to as the Churchill, it weighed almost 42 tons, had 102mm of armor, sported a 57mm main gun, and attained a maximum speed of 15mph. But as the Churchill was finally rolling off the assembly lines, the War Office-reviewing the combat experiences in North Africa, decided in early 1941 that speed and reliability were more important than heavy armor. As a result, the British looked to create a new tank with those characteristics. Enter the Cromwell tank of World War II.

What they came up with was a new specification incorporating improved mechanical and maintenance reliability, a studier 75mm armored turret able to mount a 57mm cannon, and 65mm armor hull protection. The new tank had to be no more than 24 tons in weight and have a maximum speed of 24mph. A production order for 500, of what was designated the A24, was placed with the Nuffield Mechanization and Aero Firm in June 1941. The design then went through a series of changes first morphing into the Cavalier, which proved a poor design, and then the Centaur, also deemed not suitable as a battle tank. (Both vehicles were later modified as specialized armored fighting machines such as howitzer armed, anti-aircraft, engineer, observation, and bulldozer tanks). Fortunately, in tandem with the Cavalier and Centaur, another tank design had been developed: the Cromwell tank.

Similar in appearance to the Cavalier and Centaur, the Cromwell, initially known as the Cromwell X, was the Meteor engine version of the A27 series-thus the designation A27M (M for Meteor engine). It was a re-engined Centaur I with a powerful 600 hp Meteor engine which proved an excellent choice for a tank power plant since it could accommodate any foreseen future upgrades to the Cromwell series.

The first trials for the Cromwell tank were conducted in March 1942, actually ahead of those for the Centaur tank. Teething problems were minor—mainly concerned with clutch, gears and cooling systems associated with the engine and transmission. Production started in January 1943. By that point the War Office policy regarding tank armament had changed considerably since the heavy cruiser requirement resulting in the A24/A27 series had been formulated. The combat in the Western Desert, coupled with the appearance of the American built M3 Grant and M4 Medium tanks in that theater, led to a requirement that British main battle tanks have a duel-purpose main gun capable of shooting High Explosive (HE) and Armor Piercing (AP) rounds. Work on a British design version of the 75mm gun – a bored-out model of the British 6-pounder able to fire American 75mm ammunition, was begun in December 1942. As result, Cromwell’s from the Model IV onward were fitted with this weapon in place of the originally considered 6-pounder. The first vehicles so equipped were delivered in November 1943, but there were many defects in the gun, including unsatisfactory semi-automatic cams in the breech, which were not entirely eliminated until May 1944.

The most Important British-Built Cruiser of WW2

The Cromwell Mark IV-the most numerous of the Cromwell tank series- held a crew of 5 (commander, gunner, driver, co-driver, and loader who also acted as the radio operator) protected by 76 mm of frontal armor and 20mm on its sides and rear, it weighed 28 tons, and was 20 feet ten inches long, 8 feet 2 inches high, with a width of 9 feet 6 inches. It travelled on manganese tracks 14 inches wide with center guides and could go a maximum speed of 32 mph, with a cross country rate of 18mph, and had a range of 173 miles. Its all- welded construction was carried on a improved Christie suspension system of five large independently sprung road wheels on each side. It held 64 rounds of 75mm ammunition for its main armament, in addition to 5,000 rounds for its two Besa 7.92 Caliber Machineguns.

The Cromwell was numerically the most important British- built cruiser tank during World War II, contributing, along with the American Sherman, the main equipment of the United Kingdom’s armored force. They comprised all the tanks of the Reconnaissance Regiments of the Guards, and 11th Armored Divisions. (M4s composed the tanks of those outfit’s armored regiments). However, Cromwells formed the entire tank strength of the British 7th (Desert Rats) Armored Division, as well as the 1st Polish Armored Division’s 10th Mounted Rifle Regiment, and much of the 1st Czechoslovakian Armored Brigade which fought with the Allies in Northwest Europe in 1944—45. 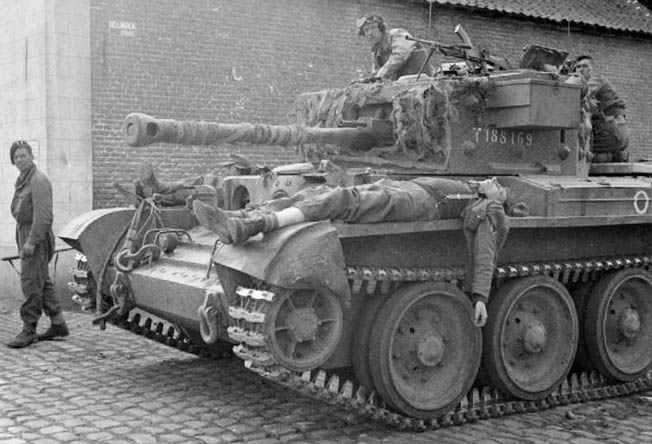 However, even with its 75mm gun the Cromwell tank was still, by 1944 standards, inferior to contemporary German tanks like the Panther and Tiger, and even late model Mark IVs. With its Meteor engine it was the fastest and most powerful British tank design of the war, but physical limitations (mainly the narrowness of the hull) prevented it being up-gunned to carry the very effective 17-pounder (76.2mm) Quick Firing Cannon. To stay alive on the modern battlefield, Cromwell tank commanders had to use his vehicle’s speed, maneuverability, and fast traversing gun turret to counter the more powerful armor an armament possessed by his Wehrmacht tank opponent. Using these advantages, a Cromwell could get on the enemy’s rear or flank and get off killer shots on these more vulnerable vehicle surfaces. The Cromwell’s speed and maneuverability could also be used to escape to safety from the unwanted attention of its more powerful adversary.

Of equal importance to the success of the Cromwell in combat, was its mechanical reliability. Although not quite up to that of the Sherman, the Cromwell tank was easy to maintain which meant it could remain in operation for long periods of time before having to be pulled out of the line for routine maintenance and repairs. This allowed it to exploit breakthroughs even better than the Sherman. For example, the 7th Armored Division advanced an average of 70 miles a day after the breakout from Normandy. Further, its speed, reliability and range made it an especially good tank for conducting long distance reconnaissance missions.

About 3,066 Cromwells of all models were produced during the war. In 1945 it was retired from active service and replaced by the Centurion tank which was introduced in that year. However, the Cromwell soldiered on and, in limited numbers, saw service in the armies of Greece and Portugal, and action in the Arab-Israeli War of 1948, as well as with the British in the Korean War two years later. (Read more about the tanks that defined the history of armored warfare inside Military Heritage magazine.)