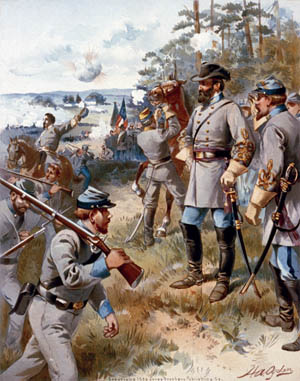 The Battle of Chancellorsville and the Death of Stonewall Jackson

As Robert E. Lee’s “right hand”, the death of Thomas J. “Stonewall” Jackson was a crushing blow to the Confederate army. But was it pneumonia?

Following his greatest victory at the Battle of Chancellorsville on May 2, 1863, Confederate Lt. Gen. Thomas J. “Stonewall” Jackson was scouting ahead of the lines with members of his staff when tragedy struck. In the pitch blackness of the early spring evening, Jackson and his men were mistaken for Union cavalry and fired upon by their own side. Jackson sustained a severe wound to his upper left arm, necessitating amputation. Upon hearing the news, victorious General Robert E. Lee remarked, “He has lost his left arm, but I have lost my right.” Lee’s words proved prophetic. Eight days after the amputation, Stonewall Jackson was dead.

After sustaining the gunshot wound to his upper left arm and a minor wound to his right hand, Jackson left the battlefield supported by two aides. He was then placed on a litter. One of the litter-bearers was shot, causing the general to be thrown painfully to the ground. Jackson was lifted back onto the litter and carried a few hundred yards to the rear, where the 27-year-old medical director of the II Corps, Dr. Hunter McGuire, examined his wounds. “I hope you are not badly hurt, General,” he said. “I am badly injured,” Jackson responded forthrightly. “I fear I am dying. I am glad you have come. I think the wound in my shoulder is still bleeding.”

At the hospital, McGuire determined that immediate surgery was necessary. When he informed Jackson, the general replied, “Yes, certainly, Dr. McGuire, do for me whatever you think best.” Chloroform was administered and Jackson murmured, “What an infinite blessing,” as he slipped into unconsciousness. McGuire first extracted a round ball that had lodged under the skin at the back of Jackson’s right hand. It had entered the palm and fractured two bones. Next, McGuire wrote, “The left arm was then amputated, about two inches below the shoulder, very rapidly, and with slight loss of blood, the ordinary circular operation having been made.”
[text_ad use_post=”455″]

Jackson tolerated the surgery well despite his earlier significant blood loss. At 3:30 the following morning, Major Alexander “Sandie” Pendleton arrived at the hospital to obtain orders for Maj. Gen. J.E.B. Stuart, Jackson’s replacement as corps commander. By 8 pm, the pain had disappeared and Jackson seemed to be doing well. The following day, fearing Jackson’s capture by nearby Federals, Lee ordered McGuire to remove his patient to Guiney Station, 27 miles away.

After their arrival, McGuire dressed Jackson’s wounds and found them to be healing well without signs of infection. Jackson seemed satisfied with his progress and inquired how long it would be before he could return to the field. At 1 am, however, he suffered another bout of nausea and asked a servant to reapply a wet towel to his abdomen.

Jackson did not want to disturb the exhausted McGuire, who awoke to find his patient complaining again of pain in his right side. After examination, McGuire reluctantly concluded that Jackson had “pleuro-pneumonia of the right chest,” presumably secondary to the fall from the litter. The doctor speculated, “Contusion of the lung, with extravasion of blood in the chest, was probably produced by the fall referred to, and the loss of blood prevented any ill effects until reaction had been well established, and then inflammation ensued.”

Jackson was restless that Thursday night, calling out various orders to his men. “A.P. Hill, prepare for action!” he shouted on one occasion. “Pass the infantry to the front!” he commanded, as well as “Tell Major Hawks to send forward provisions for the troops!”

When he awoke in the afternoon and saw several surgeons standing around his bed, he said, “I see from the number of physicians that you think my condition dangerous, but I thank God, if it is His will, that I am ready to go. I am not afraid to die.” Following another difficult night, the general awoke on Sunday, May 10, completely exhausted. It was apparent to everyone that he could not last the day.

After brief visits from little Julia and Major Pendleton, Jackson lapsed into a coma. He awoke shortly before 3:15 pm and spoke his final, enigmatic words: “Let us cross over the river and rest under the shade of the trees.”