Saldain’s Defeat at the Hands of the Knights Templar

As the fateful day drew to a close, the exhausted World War I soldiers of the German 25th and 82nd Reserve Divisions huddled in their trenches. Read more

Blood in the Sand: Shiite Assassins

Their name has been synonymous with murder for almost a thousand years, but few people know the full truth about the enigmatic organization known as the Assassins. Read more

Pious Warriors: The Hospitallers of the Crusade

At dawn, June 23, 1565, on the island of Malta, headquarters and final stronghold of the Catholic military order of the “Knights of the Hospital of St. Read more

Siege of Rhodes: The Will Of The Hospitallers

Although the great Crusades were over by 1309 ad, one old crusading order continued to evolve, flourish, and make enemies—the Knights Hospitallers of St. Read more

Lake Peipus: Battle on the Ice

In the early 13th century, the Baltic frontier in central Europe remained a hostile and uninviting place. Pagan Europeans far outnumbered Christians, and the area was a focal point for constant conflict between mutually exploitive neighbors slavering to carve out new territorial holdings at the expense of anyone who stood in their way. Read more

The Battle of Al Mansourah and the Seventh Crusade, 1251

After a century and a half of efforts—with mixed success—by Western Europe to seize control of the Holy Land, the Seventh Crusade of 1250 led by Louis IX of France was the last best chance to change the political and military situation in the Eastern world before the Reformation. Read more

Richard the Lionheart’s Victory on the Road to Jerusalem

It was the middle of June 1191, and the Third Crusade was bogged down before the walls of Acre, the largest city and chief port of the former Latin Kingdom of Jerusalem. Read more 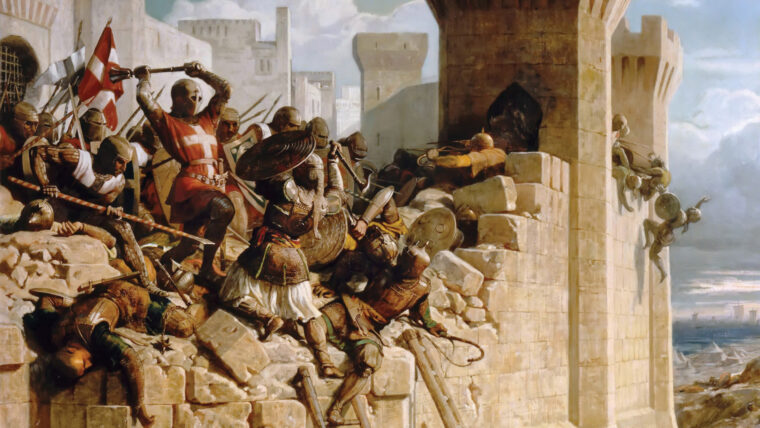 The Last Banner Falls at the Siege of Acre

The Latin Crusaders manning the battlements were armed with spears, axes, and crossbows. They shared with each other a desire to fight and die for the Cross. Read more

The Poor Knights of Christ and the Temple of Solomon, also known as the Order of the Temple, was the first religious military order of the Latin Church. Read more