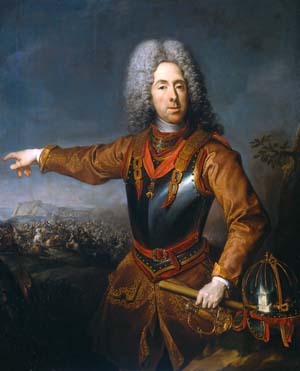 Prince Eugene of Savoy & the Turks at the Battle of Peterwardein

With Eastern Europe at stake, Prince Eugene confronts the Turks at the Battle of Peterwardein and Temesvár.

Thousands of dead Turkish soldiers choked the river and littered its bank. It was the fall of 1697 and the young Imperial Field Marshall, Prince Eugene of Savoy, had just vanquished the Ottoman army at Zenta (or Senta), on Hungary’s River Tiza. His decisive victory brought about the 1699 Peace of Karlowitz and the end of the Second Turkish War (1683-1699) that had pitted the Holy Alliance of Poland, Venice, Russia, and Austria’s Holy Roman Empire against the Ottoman Turks. With the exception of the Ottoman Banat (a border march) of Temesvár, the treaty left Austria in possession of all of Hungary and Transylvania.
[text_ad]

Eugene thus became a European hero and Austria a major European power. But peace had scarcely been secured in the east when the War of the Spanish Succession (1701-1714) broke out in the west. It pitted the Grand Alliance of England, the Netherlands, and the Empire against the French and Spanish. Together with his friend, the brilliant Duke of Marlborough, Eugene won several great victories for the allies.

In the east, however, the smoldering Turkish Empire was not yet finished, not by a long shot. Like their foes, the Ottomans regarded the Karlowitz treaty as little more than an armistice. The Ottoman Empire of Sultan Ahmed Khan III Najib (who ruled between 1703 and 1730) still spanned over two million square kilometers. With such a vast territory and burgeoning population, it was only a matter of time before the Ottomans would recuperate their manpower losses. In 1710 that time came. Infuriated by Russian border violations and new fortifications in the Ukraine, the Porte (Ottoman High Command) declared war on Russia.

Submitting to the Ottomans After a Lengthy Standoff at River Pruth

A year later, an outmaneuvered Russian army submitted to the Ottomans after a lengthy standoff on the River Pruth. Humiliated, Peter the Great accepted an unfavorable peace treaty that returned Azov and other fortresses to the Ottomans. With the Russians cowed, the Ottomans used a Venetian-inspired uprising in Montenegro as an excuse to resume their war with Venice in 1714. Grand Vizier Damad (also known as Silahdar) Ali-Pasha, the Sultan’s son-in-law and personal favorite, led the Turks in an assault on the Venetian Kingdom of the Morea (the Greek Peloponnese). The Ottomans were not so foolish however, as not to realize that their victories in Russia and in the Morea unnerved their old archenemy, Austria.

Vienna basked in the summer heat of 1715 when, in a pompous ceremony, Ibrahim, the Sultan’s müteferrika (a member of the Ottoman palace ‘elite’) walked up to a seated, short and wiry individual who was surrounded by the chief Imperial officers of state. This was Eugene, now in his fifties and president of the Hofkriegsrat (the Imperial War Council). Though a plain brown tunic was his more usual attire, in light of the occasion Eugene now wore gold-embroidered red silk.

Wishing for the Moon

From under his broad brimmed hat, Prince Eugene eyed the Turkish representative. The müteferrika presented a letter from the Grand Vizier Damad by which Damad expressed his hope for the Emperor’s neutrality in the Ottoman war with Venice. It was a not to be. Damad might as well have wished for the moon.

Eugene fully realized that no matter how cordial the Turks presented themselves, it was only a matter of time before the Ottoman behemoth swung towards the Empire. In April 1716, on Eugene’s urging, in April 1716 Emperor Charles VI of the Imperial House of Hapsburg renewed Austria’s old alliance with Venice. Consequently, Charles VI insisted that the Ottomans adhere to the treaty of Karlowitz and return to Venice all the lands they had taken.

A New Declaration of War

On May 15, 1716, the Porte answered Austria’s demands with a declaration of war. The Morea had already fallen to Grand Vizier Damad in the late summer of the previous year and the Venetians were hard pressed to hold onto Albania and the Dalmatian coast. The Porte was free to direct the brunt of its martial might against Austria. Leading it would be none other than the Grand Vizier Damad Ali-Pasha.

At Modon in the Morea, Damad had paid a reward for every Christian brought to his tent so he could personally relish the sight of their decapitations. He also executed any Turks who had been foolish enough to embrace Christianity while under Venetian rule. Now he wrote to Eugene, “there is no doubt that the blood which is going to flow on both sides will fall like a curse upon you, your children and your children’s children until the last judgement.” Damad inspired his own commanders with the words, “attack the infidels without mercy … Be neither elated nor down-hearted, and you will triumph.”

By Fluke More Than by Design

For the first time since Suleiman the Magnificent (1490-1566), war in the Balkans was forced upon the Ottomans instead of the other way around. This suited Eugene just fine because by fluke more than by design, European power politics following the end of the War of the Spanish Succession in 1714 resulted in an unusual period of peace in the west.

The chief catalysts for this peace were the 1715 death of Austria’s old European enemy, France’s dynamic Louis XIV, and the resurgence of the Whig party in England in 1714. Louis XIV was succeeded by his great grandson Louis XV. In the event of the child King’s death, his regent, the Duke of Orleans, was more worried about safeguarding his own claim to the throne from his rival claimant, Philip V of Spain, than in starting new wars. England’s Whigs meanwhile were too occupied with the Jacobite opposition and the danger of rebellions to get involved in Continental struggles.

The Pope Weighs In

Thus, Eugene was free to concentrate on the Turks in the east, which is what he really wanted to do. Moreover, Pope Clement XI offered 500,000 florins from church lands for the effort, which he considered a crusade. Nonetheless, the brunt of the war costs would fall on Austria. Indeed, unlike the previous two Turkish Wars, this one was to be virtually an almost exclusively Austrian war. The Venetians were busy defending the Ionian Islands, and of the German princes, only Max Emmanuel of Bavaria sent a sizeable contingent of troops.

The collection of an army had commenced and made substantial progress even before the Porte’s declaration of war. Difficulties in the form of droughts and floods intervened and Eugene himself remained in Vienna until July 2, 1716, to make sure of sufficient supplies and funds, but his diligence paid off. After a ride of only seven days he reached the village of Futak, north of the Danube and west of the fortress town of Peterwardein (Petrovaradin), the “Gibraltar of Hungary.” There he beheld his army of 65,000 men, which he described to be “in a very fine serviceable condition.” His comments were in stark contrast to those he made in 1697 when he had been given command of an Imperial army in which there “are many diseases but only a little money.”

Fighting For Money, Not Country

Through their thick walrus mustaches, Prince Eugene’s troopers no doubt cursed and muttered over the usual hardships of war. Theirs was a hard life. They fought not for cause and country but for money. Though hardy peasant louts were the favorite source of recruits for the Imperial Army, most of the soldiers—like those of all 18th-century armies—were from the bottom of society: vagabonds, criminals and beggars, especially in the infantry. Productive tradesmen and farmers were usually exempt from military service because they kept the economy healthy. Only through strict, at times excessively brutal, discipline were recruits welded into formidable fighting machines. Nevertheless, Eugene’s soldiers, flushed with recent victories in the Rhineland and with unabated confidence in a leader who genuinely cared for their well being, were ready for a fight.