The Army Air Corps at the Battle of the Bulge

Allied airpower played a significant role in turning the tide at the Battle of the Bulge.

At daybreak on December 16, 1944, three senior officers in the Army Air Corps and a Royal Air Force air vice marshal arrived at an elegant chateau near the town of Spa in southeastern Belgium that was the headquarters of Lt. Gen. Courtney Hodges, commander of the U.S. First Army.

The First and Ninth Armies were each demanding air operations to kick off their Christmas offensives, and the purpose of the meeting was to decide which army would get the tactical benefit of heavy bombers. As maps were being pinned to the wall in Hodges’ operations room that Saturday morning, the telephone rang. Three German panzer armies had just thundered out of the chill, misty Ardennes Forest. The Battle of the Bulge was under way. (You can read more about the Bulge and other stories from the European Theater inside WWII History magazine.)

Depending On Fog, Night and Snow

Anderson and Quesada groaned. Only the day before they had flown to Supreme Allied Headquarters (SHAEF) at Versailles to relay ominous reconnaissance reports of a German buildup in the region of the Ardennes Forest. The reports had shown increased truck and railroad traffic, and armored vehicle tracks spotted leading into the forest but not emerging. Generals Anderson and Quesada had been brushed off because the Allied intelligence chiefs believed the Germans, weakened and pushed back to the Rhine by superior Allied forces, were no longer capable of mounting a major attack. 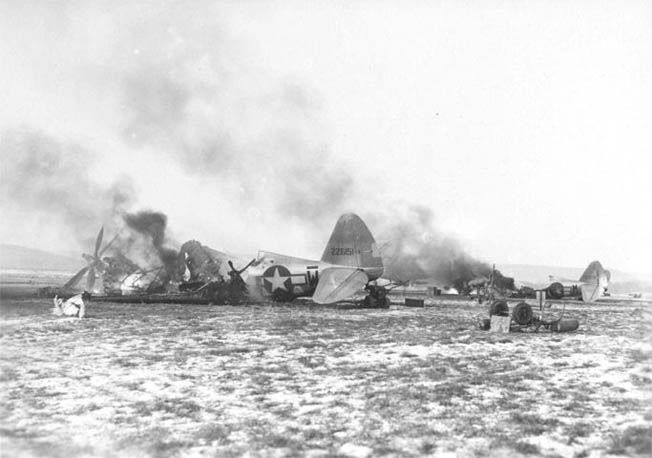 Launching his last great gamble of World War II, the Ardennes counteroffensive, Adolf Hitler depended on “fog, night, and snow” to ground the Allied air forces and give him victory. For a time, weather proved to be his ally.

The Fifth and Sixth Panzer Armies and the Seventh Army smashed through thinly held American defense lines and caused panic and confusion at all command levels. The Germans had deliberately waited for a period of bad weather, which was to herald the worst European winter for half a century, to shield their ground operations from overwhelming RAF and USAAF supremacy.

Preciously husbanded fuel, enough for only six days of operations, allowed the German armor to advance and the Luftwaffe to fly. The vile weather, including thick ground fog in England that made takeoffs and landings risky, would not clear for several days, during which U.S. units in the sector of the Ardennes foreset were pushed back and severely mauled before regaining their balance. The Luftwaffe supported the counter-offensive with all its capabilities. Some 1,500 fighters, 300 fighter-bombers, and 500 twin-engine fighters and bombers were used in the attack.

While shock and indecision paralyzed Dwight D. Eisenhower’s headquarters for two critical days, General Carl A. “Tooey” Spaatz, the commander of the U.S. Strategic Air Forces in Europe, responded decisively to the American ground force’s desperate need for additional air support. He directed two of the Eighth Air Force’s fighter groups to rush from England to the continent and place themselves at Vandenberg’s operational disposal.

Rising Gallantly to the Challenge

Despite the treacherous weather conditions of low cloud, fog, snow, and rain, airmen of the Army Air Corps rose gallantly to the challenge. On December 17, a cutting-edge German battle group with 3,500 men and 150 tanks snaking westward along country lanes north of St. Vith, Belgium, was located by two P-38 Lightning fighters and halted by bombing and strafing P-47 Thunderbolts of the 365th and 368th Fighter Groups. This gave First Army combat engineers time to demolish key bridges the enemy needed, and the 1st SS Panzer Division’s attack lost momentum.

The following day brought a slight clearing of the skies, allowing Anderson’s B-26 Marauder medium bombers to wreck a score of bridges, further impeding the German offensive. The Eighth Air Force was able to send out a few missions against tactical targets behind the enemy lines, though the fog in England caused several tragic B-17 collisions and the main bombing force had to stand down for a critical week .

Inside the Battle of the Bulge, the Luftwaffe air crews made the most of the bad weather for the first few days, but then their luck ran out. They were hampered, as were the German ground forces, by a desperate shortage of fuel. British and American bomber groups had been targeting enemy refineries for many months, and German oil stocks were now almost exhausted.

Allied fortunes changed for the better on December 23, when an area of high pressure, called a “Russian high” by the meteorologists, dispersed the low clouds and provided five days of acceptable flying weather. Many air groups were able to take off in England and offer tactical support to the hard-pressed U.S. divisions in the Bulge.

Allied air strikes became increasingly effective, battering enemy troop convoys; destroying bridges, supply dumps, and communication lines; and knocking Luftwaffe planes out of the air. The spirits of GIs rose when they heard the steady drone of C-47 transports arriving on December 23 with much-needed cargoes of ammunition, food, and medical supplies. Nowhere was the resupply operation cheered more loudly than in and around Bastogne, where the besieged 101st Airborne Division and attached elements had been waging an epic defense against relentless German pressure.

Staggering Figures from the Bulge

Between December 16, 1944, and January 6, 1945, the Eighth and Ninth Air Forces claimed more than 400 enemy fighters shot down, while the RAF downed hundreds more. As U.S. ground forces blunted the German offensive five miles short of the Meuse River, where British troops covered the crossings, the Luftwaffe ceased to exist as a threat in the Bulge.