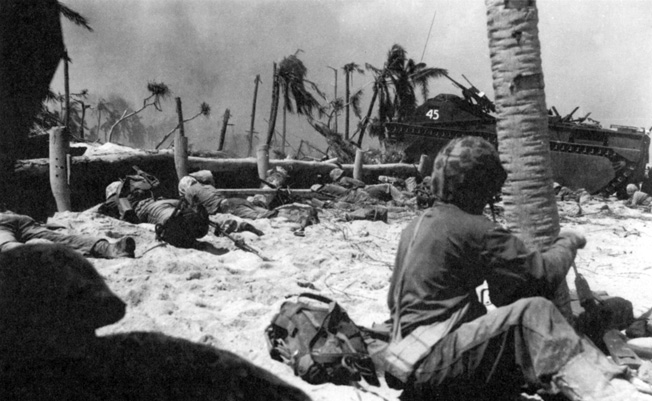 Colonel Merritt A. Edson, the 2nd Marine Division’s chief of staff, and Colonel David M. Shoup designed a simple plan to seize Betio—land along its northern beaches, drive straight across the narrow island, and kill the defenders. They selected the northern (lagoon) side rather than the southern (ocean) side beaches as the sites for the landings because even though the southern beaches offered better landing conditions—relatively straight beaches with few places for the Japanese to mount crossfire—the Japanese had placed their sturdiest defenses along that stretch of sand.
[text_ad]

Shoup and Edson figured that the lagoon side would be calmer than the ocean side, which absorbed the harsher ocean currents, and they assumed that the Japanese would delay completing the lagoon defenses until all else was finished, as they needed to use the long pier stretching from the northern beaches to the reef to bring in supplies.

The landing zone contained three adjoining 500-yard sectors stretching from the extreme west end of the island to just beyond the pier in the middle, Beaches Red 1, Red 2, and Red 3, Bowen’s beach.

The straightforward plan contained drawbacks. The Marines had to attack superbly trained soldiers waiting in camouflaged, reinforced bunkers. The tiny island, unlike the larger Guadalcanal, offered little room for maneuver.

That left one tactic at their disposal—simple and brutal.

They had to take Betio in the toughest of ways, yard by yard, absorbing potentially horrifying losses until every pillbox, every bunker, every Japanese, had been eliminated. On Betio, brute force and savage fighting overshadowed finesse. This would be a bloody slugfest of heavyweights standing in the middle of the ring, not two fast-moving foes landing quick jabs.