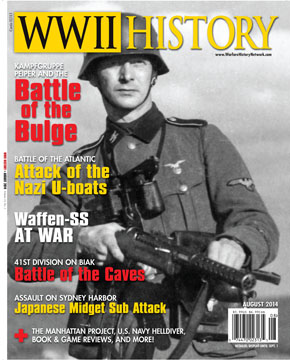 After refueling in the mid-Atlantic and suffering bow damage from being rammed by a tanker, a 769-ton Nazi U-Boat reached its destination, the American East Coast, early on Monday, May 4, 1942.

U-333 stayed submerged off the balmy southeastern Florida shore during the daylight hours and then surfaced when evening came. Climbing one after another to the bridge for a breath of fresh air, Lt. Cmdr. Peter Cremer and his 43 crewmen rubbed their eyes in disbelief.

“We had left a blacked-out Europe behind us,” reported Cremer, one of Admiral Karl Dönitz’ bold “gray wolf” submarine skippers who wreaked havoc on Allied convoys throughout World War II. “Yet here the buoys were blinking as normal, the famous lighthouse as Jupiter Inlet was sweeping its luminous cone far over the sea. We were cruising off a brightly lit coastal road with darting headlights from innumerable cars.”

“All We Had to Do Was Press the Button…”

Laden with 14 torpedoes and mines, the Type VII submarine moved in so close to the Florida coastline, said Cremer, that “we could distinguish equally the big hotels and the cheap dives, and read the flickering neon signs… All of this after nearly five months of war! Before this sea of light, against this footlight glare of a carefree new world, we were passing the silhouettes of ships recognizable in every detail and sharp as the outlines in a sales catalogue. Here they were formally presented to us on a plate: please help yourselves! All we had to do was press the button.”

So begins “A Roll of the Drums,” Michael Hull’s chilling feature in the August 2014 edition of WWII History Magazine. As you’ll read inside, it wasn’t just U-333 that threatened America’s shorlines. Nazi U-Boats were hightly effective in bringing World War II to North America as they ravaged merchant shipping all along the East Coast.

Of course, this is only one of many in-depth articles you’ll find in the August 2014 edition. Others include:

“The Big Three in Tehran”
Franklin D. Roosevelt, Winston Chruchill Joseph Stalin, and their pivotal meeting in the Iranian capital in late 1943.

“One in a Thousand Chance”
In May 1942, a Japanese submarine force snuck into Sydney harbor in a daring, suicidal attack.

“In Peiper’s Path”
The offensive Adolf Hitler sent Jochen Peiper into was his last desperate gamble in the West. But how did it influence the fighting at the Battle of the Bulge?

“The Invasion of New Zealand”
In preparation for amphibious operations in the Pacific, U.S. Marines trained in New Zealand.

“Score 109 to 1″
In the spring of 1944, the small island of Biak—a stepping stone to the Philippines—was taken by the Americans.

Let us know what you think about this and other features in the August 2014 edition by commenting on our website.