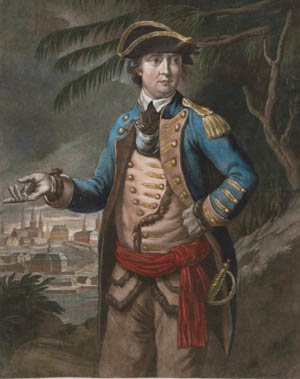 Strange it is that American independence is owed not only to a crushing American defeat but also to an infamous American traitor.

The struggle of the Americans to free themselves of British rule and to establish self-government on their own continent was never in greater peril than in the year 1776, and it was still three years before Benedict Arnold would change sides.

Even after the attacks at Lexington and Concord in April 1775 and the bloody Battle of Bunker Hill in June, the Colonists had not risen en masse for independence, and agitation against Britain was considerably greater in New England than in the southern colonies. In August 1776, General William Howe landed on Long Island and sent the rebel army reeling, nearly crushing it; it escaped him only owing to an unfavorable wind and fog.

“Fatal to the American Cause”

Still, a means of snuffing the rebellion yet remained before winter: Sever New England from New York, the Middle Colonies, and the South by taking command of Lake Champlain and the Hudson River valley. With these in British hands, British armies could invade the hot bed of rebellion, Massachusetts, from the rear—the snake would be strangled in its nest.

To control the Hudson, British General Sir Guy Carleton was to descend via Lake Champlain from Quebec, while Howe was to move north from Manhattan. The plan was sweet, but two things went awry: Washington evaded Howe such that the Virginian eventually led the British general south instead of north; and Benedict Arnold threw himself so madly and effectively at Carleton that the northern British commander turned around. To quote John Richard Alden in The American Revolution (Harper & Row, 1954): “A junction between Carleton and Howe in 1776 would probably have been fatal to the American cause.”

Reconstruction of the Inflexible

After defeat and retreat from Canada, Arnold proposed to defend Lake Champlain. Paying Rhode Islanders, he began building a fleet of small gunboats. Carleton was thus forced to create his own fighting fleet, there being no land road down either shore of the lake large enough for his army to travel, and then attack the strongest point, Fort Ticonderoga. This delay alone benefited the Americans, and Carleton extended it by dismantling a British warship on the St. Lawrence River for reassembly at the northern end of the lake.

The reconstruction of Inflexible alone took a month. By this time, Arnold had his small-ship fleet ready behind Valcour Island, south of present-day Plattsburgh. He had done his work well, hiding his fleet up the bay and tangling the entrance with anchor lines and chains.

By the time Carleton set out, it was October, and icy winds were blowing. On the 11th, the British fleet sailed past Valcour Island. Arnold waited until the biggest vessels had sailed by, then sallied out to engage the smaller ones. The fight lasted all day, Arnold racing from cannon to cannon on his flagship Congress because he was the only one aboard who knew how to aim and fire the guns. But the issue was never much in doubt. When the Inflexible and other large craft joined the fight, the Americans were staggered. Darkness halted the fighting.

Confident they would finish off the Americans next day, the British completely missed Arnold’s exquisite escape from the bay to the larger lake. But the salvation was temporary. Carleton caught up with the battered little fleet where the lake narrowed and finished it off. Arnold’s soldier-sailors scuttled what was left and escaped to Fort Ticonderoga.

Was Benedict Arnold a Savior of American Independence?

Carleton advanced to take the fort, and likely he could have. But he felt the Canadian winter descending and he called the whole thing off, sailing back with the large army to Montreal and winter quarters.

Benedict Arnold’s acute combativeness thus delayed the British stratagem for another year, when it was again tried by General Burgoyne. This time, 1777, the Americans were better prepared. The result was a British disaster at Saratoga and French aid to the American cause.

Benedict Arnold later became an American pariah, but his madcap defense of Lake Champlain in 1776 sustained, even saved, American independence.

One thought on “Benedict Arnold: American Traitor and Patriot”