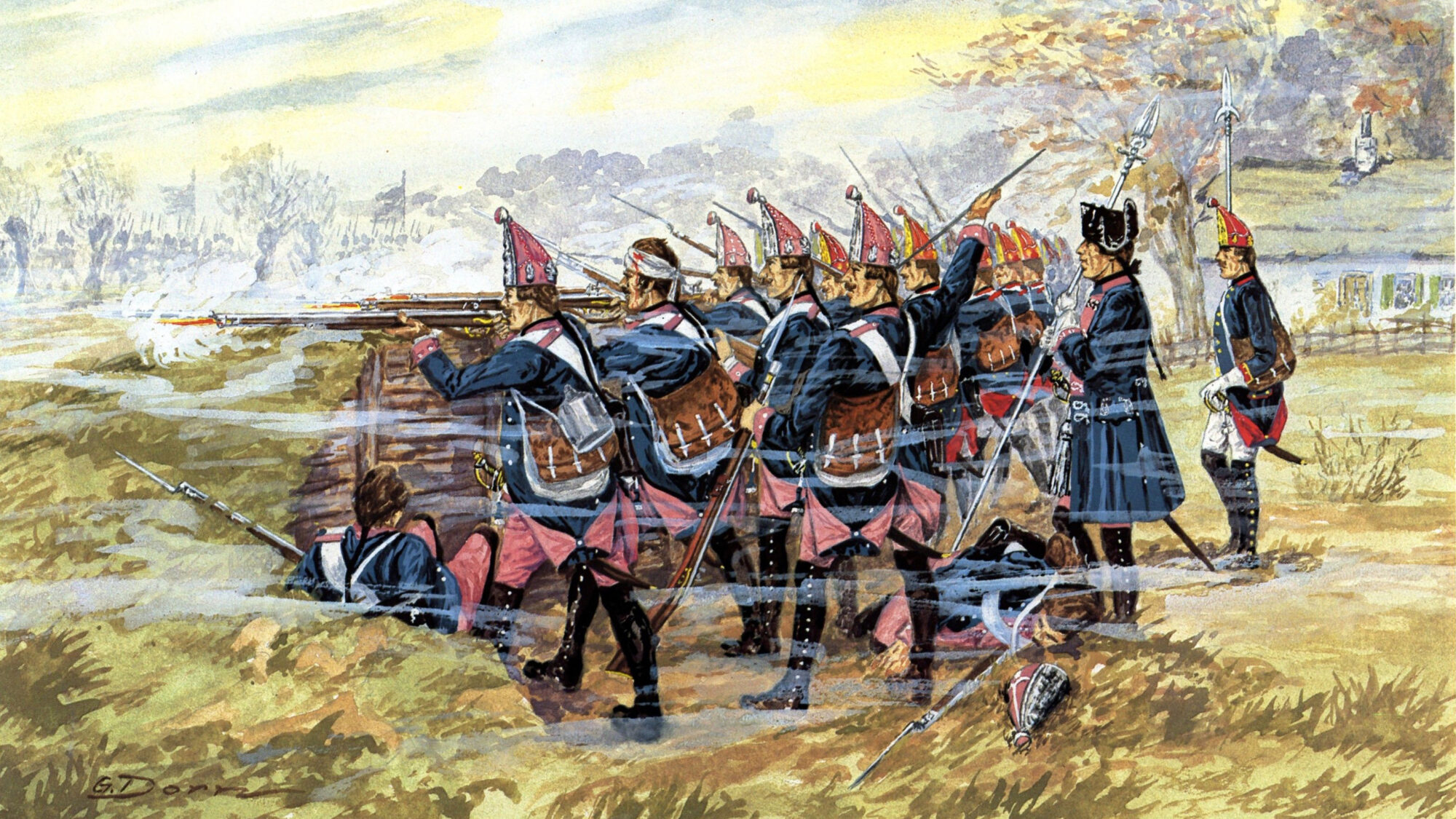 Miter Helmet: The tall miter design dated from the 17th century, when grenadiers threw grenades and needed a hat that would not impede their throwing arm. The Prussian eagle was the centerpiece of the ornate brass front plate.

Model 1740 Musket: The .72-caliber smoothbore flint-lock musket made in Potsdam featured a decorated walnut or maple stock and had a 41-inch-long steel barrel and an overall length of 56 inches. Sturdy iron ramrods were introduced in 1730 to replace fragile wooden ones. The 1723 and 1740 patterns became the first standardized firearms of Prussia and many other German states in the 18th century.

Uniform: The grenadier wears a dark blue coat with red “facings” (lapels, collar, cuffs), brass buttons, and white buttonhole tape. His waistcoat, and breeches are yellow and he wears a red wool “neck stock” over his shirt collar.

Cartridge Box: The black leather cartridge box was worn with a buff white shoulder sling. The front flap of the box is decorated with a brass plate in the center (not visible) and flaming bombs in each corner. The box could carry as many as 80 rounds.

Bayonet: The Potsdam musket used a triangular cross-section bayonet. It was carried on a buff waist belt with a grenadier sword.

Shoes and Gaiters: The square-toed shoes were made of blackened leather and were treated with wax and oil not only to waterproof them but also to offer a smooth exterior suitable for polishing. They were held securely in place with a leather strap through a brass buckle. The grenadiers wore gaiters made of white cloth over wool socks.

In 1735, a single grenadier company was raised for each infantry battalion, and this was later expanded to two grenadier companies per battalion. When King Frederick II “The Great” ascended to the throne five years later, he reduced the grenadier-only Crown Prince’s Regiment to a Grenadier Guard Battalion. Five regiments of the Prussian Guard were designated as guard grenadiers, and there were an additional fourteen regiments among the line infantry of the German empire.

Frederick the Great had a need for units that were aggressive and steadfast in combat, and the grenadiers were among the most dependable in this regard. During Frederick the Great’s reign the grenadiers were selected not for their size—as they had been previously—but for their robust nature to ensure that they could endure grueling marches. Like other Prussian infantrymen, Prussian grenadiers could fire three to four rounds per minute. On the field of battle, four grenadier companies could be combined to form a 700-man grenadier battalion.

One of their most splendid attacks occurred when they spearheaded the assault against the Austrian left flank at Leuthen on December 5, 1757. During the assault, they were the first troops to fight their way into Leuthen’s fortified church.