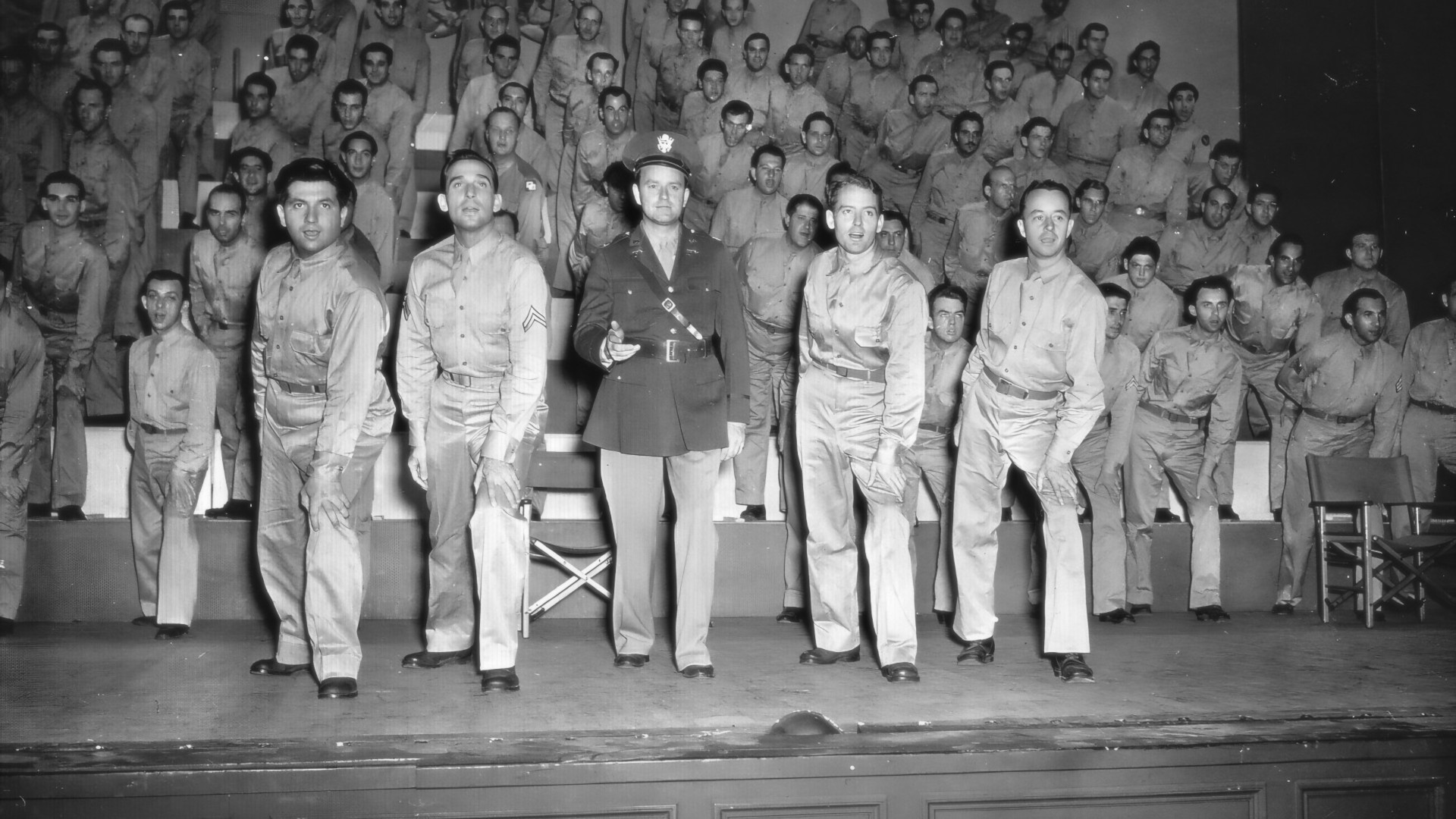 “This is the Army”: Irving Berlin’s War

Irving Berlin made the movie and the musical famous during World War II.

This article appears in: September 2011

The most successful and popular patriotic show of World War II and one of the most unique productions in the history of entertainment was Irving Berlin’s This Is the Army, which originally began as a Broadway musical. General George C. Marshall gave Berlin permission to stage a morale-boosting revue early in 1942 to raise money for the military.

Rehearsals were held at Camp Upton, New York, beginning in the spring of 1942 in an old Civilian Conservation Corps barracks called T-11. At one end was a large recreation room with a stone fireplace, where Berlin placed his special piano.  It was next to a latrine, which had a hot water tank. Berlin liked to lean against the tank to warm his back.

Berlin completed most of the score by the end of April. The show was then auditioned on Governor’s Island in New York Harbor for General Irving J. Phillipson.  Immediately thereafter, Berlin received the approval he was waiting for.

The musical, which was directed by 24-year-old Ezra Stone (radio’s Henry Aldrich), opened on Broadway with a cast of 300 uniformed soldiers on July 4, 1942, to rave reviews. The most popular songs from the revue were “This Is the Army Mr. Jones” and “I Left My Heart at the Stage Door Canteen.” Other notable numbers include “I’m Getting Tired So I Can Sleep,” “How About a Cheer for the Navy,” “American Eagles,” and “With My Head in the Clouds for the Air Corps.”

The simple song lyrics introduced human feelings and emotions into the score, which made military life more understandable to wartime audiences. The songs were easy to sing and the lyrics easy to remember.

The show was so successful that the initial four-week engagement was extended to 12 weeks followed by a national tour, and then with a greatly reduced cast to tours of the European, Far East, and Pacific Theaters. Berlin ingeniously inserted new songs into the show depending on the audience and location. In England, he added “My British Buddy,” and in the Pacific he included “Heaven Watch the Philippines.”

First Lady Eleanor Roosevelt saw the show several times during its first weeks at the Broadway Theatre and became a devotee. She desperately wanted her husband to see it, but he was unable to travel to New York City. A special matinee command performance was arranged for October 8, 1942, at the National Theatre in Washington, D.C., for the president.  He thoroughly enjoyed the performance and invited the complete cast and crew to the White House the following day. The president shook hands with the entire company, over 350 soldiers, which kept him up until 1:30 the following morning.

This Is the Army Goes on Tour

This Is the Army was an exposition of patriotism as well as pure and simple entertainment, and the musical theater was an exceptional vehicle for boosting wartime morale. The show was a rousing, captivating musical tribute to Americans in uniform, including those in the Navy and Air Corps.

The story of Army life was told simply in song and dance, with a bit of added comedy. No battle scenes, no deaths, and no destruction were introduced. Girls, sweethearts, and mothers were the objects of songs. Kathleen E.R. Smith, in her book, God Bless America—Tin Pan Alley Goes to War, contends that the impression of Army life presented was more like a summer camp vacation instead of the serious matter of preparing for war.

By the time the national tour of This Is the Army concluded on February 13, 1943, in San Francisco, about $2 million had been raised for the Army Emergency Relief Fund for deserving wives, children, and parents of servicemen and women.

The international touring company of This Is the Army first went to England in November 1943, and Irving Berlin met King George VI and Queen Elizabeth after a London performance. Berlin also received an invitation to lunch with Prime Minister Winston Churchill at his 10 Downing Street residence in error.  The invitation was intended for Isaiah Berlin, a well-known English philosopher and political thinker who was assigned to the British embassy in Washington at that time. Churchill did not realize the error until well after the meeting, when he was informed that his lunch guest that day was the famous American songwriter.

After touring the English provinces, the company went to North Africa for two weeks and then sailed for Italy. This Is the Army was presented at the San Carlo Opera House in Naples in early April 1944. The group arrived in Rome by truck only six days after the Eternal City fell to the Allies. The musical was presented twice a day at the Royal Opera House in June.

Egypt was the next stop in early August, with This Is the Army being performed at the Cairo Opera House until the end of the month. September and October were spent in Iran. The company then traveled to the vast Pacific Theater, with New Guinea the first stop at the end of December 1944.

The company eventually landed at Guam in early August 1945, days before the first atomic bomb was dropped on Japan. A number of island-hopping stops followed, from Leyte in the Philippines to Okinawa, Iwo Jima, and other Pacific islands. The touring company reached Hawaii on October 10 and gave its final performance in Honolulu on October 22, 1945.  Irving Berlin spoke after the last performance and expressed hope that he would never again have to compose a war song.

Irving Berlin on the Silver Screen

This Is the Army was made into a Technicolor movie by Warner Brothers in 1943. The film starred future President Ronald Reagan (then an Army lieutenant), George Murphy (later a senator from California), and Joan Leslie. The motion picture was produced by Hal B. Wallis and Jack L. Warner and directed by Michael Curtiz. The entire cast and crew were transported to Hollywood in February 1943 and stayed at a large tent camp near Warner Brothers Studio under military command. Every day they marched to the studio and proceeded to duty at their assigned sound stages. At the end of the day’s shooting, they marched back to their campsite in formation.

Irving Berlin’s doleful cinematic performance of “Oh How I Hate to Get Up in the Morning,” recreating the role he previously played in his World War I musical Yip! Yip! Yaphank, is legendary. Boxer Joe Louis, Frances Langford, and Ezra Stone also appeared in the movie version, along with Kate Smith, who naturally sang “God Bless America.” Included in the cast were hundreds of soldiers released from duty until the filming was completed.

Although the movie was mainly a musical that merged entertainment and propaganda, a thin plot tells the story of Jerry Jones (George Murphy) and his son, Johnny (Ronald Reagan), during the course of two world wars. This Is The Army won an Academy Award in 1943 for best musical score. The movie was not seen on television until it reverted to the public domain in the 1970s. The outstanding Berlin songs, presented with bits of optimism and escapism, were largely responsible for the success of the film.

An illustrated souvenir book entitled Irving Berlin’s All Soldier Show This Is The Army was available for purchase at performances of the musical. An expanded version, with complete words and music, for the motion picture was later made available and sold in music and other stores and theaters during wartime. The words “All Soldier Show” were dropped from the title of the movie album. All proceeds from the sale of the souvenir albums went to the Army Emergency Relief Fund. The souvenir album originally cost 50 cents. Copies occasionally appear for sale today for considerably more money.

From Israel Baline to Irving Berlin

The son of a synagogue cantor, Israel Baline was born in Russia on May 11, 1888. His family immigrated to the United States in 1893 to escape oppression when Israel was five years old. The family initially lived on Monroe Street on the Lower East Side of Manhattan. After a few weeks, the Balines moved to a brownstone at 330 Cherry Street.

Young Israel began singing on street corners and in restaurants after his father’s death to help support his mother and siblings. In the early 1900s he became a singing waiter and began to write songs. His first published hit, for which he wrote only the lyrics, was “Marie from Sunny Italy.” “Alexander’s Ragtime Band,” an all-time classic still popular today, was written in 1911. Baline changed his name to a more American sounding Irving Berlin at that time.

Berlin was drafted into the Army in 1917 during World War I and was sent to Camp Upton in Yaphank, Long Island, where he wrote the musical Yip! Yip! Yaphank. The review raised $83,000 to build a service center at Camp Upton. However, the service center was never built, and Berlin never found out what became of the money.

“God Bless America,” which was originally written for this show, was thought to be a little too hymn-like for a musical, and remained unknown and unpublished in Berlin’s files. Kate Smith introduced the song during a CBS radio broadcast on Armistice Day, November 11, 1938, and recorded “God Bless America” for RCA Victor on March 21, 1939. Her original version was reissued over the years on many occasions and was also recorded by numerous other artists.

Berlin wanted “God Bless America” to be the final number of the Broadway musical. Director Ezra Stone had other ideas and used the song “This Time.” Stone eventually realized how wrong he was!

Irving Berlin suggested that Kate Smith recreate her radio introduction of “God Bless America” in the movie version of This Is the Army. Warner Brothers, the studio that purchased the film rights from Berlin for $250,000, which was promptly donated to the Army, agreed. The five-minute color cameo, which later gained historic status, was staged in a Hollywood studio in early May 1943.

In a massive recreated radio theater backed by a large orchestra and chorus conducted by Jack Miller, Smith belted out “God Bless America” with poise and conviction. Smith sang the verse and three choruses in one of the movie’s most unforgettable highlights.

The Only Integrated Unit in the Military

Author Lawrence Bergreen has written that the daring, progressive decision was not so much from Berlin’s social beliefs as from his show business background and savvy. African American performers had long been stars and popular with both white and African American audiences. Berlin was simply incorporating what he was familiar with into the Army by integrating the revue.

Among the numbers performed by African American actors was “That’s What the Well-Dressed Man in Harlem Will Wear,” which featured champion boxer Joe Louis as himself in the movie version.

This Is the Army eventually raised more than $10 million for the Army Emergency Relief Fund from the stage productions and movie version until performances ceased at the end of 1945.

The United States Postal Service issued a commemorative stamp in honor of Irving Berlin in 2002. The stamp portrait is a colorized version of an Edward Steichen photograph of Berlin, taken in black and white in 1932. The portrait of Irving Berlin is superimposed over part of the original handwritten score of “God Bless America,” with Berlin’s signature from that score at the bottom of the stamp.

One thought on ““This is the Army”: Irving Berlin’s War”