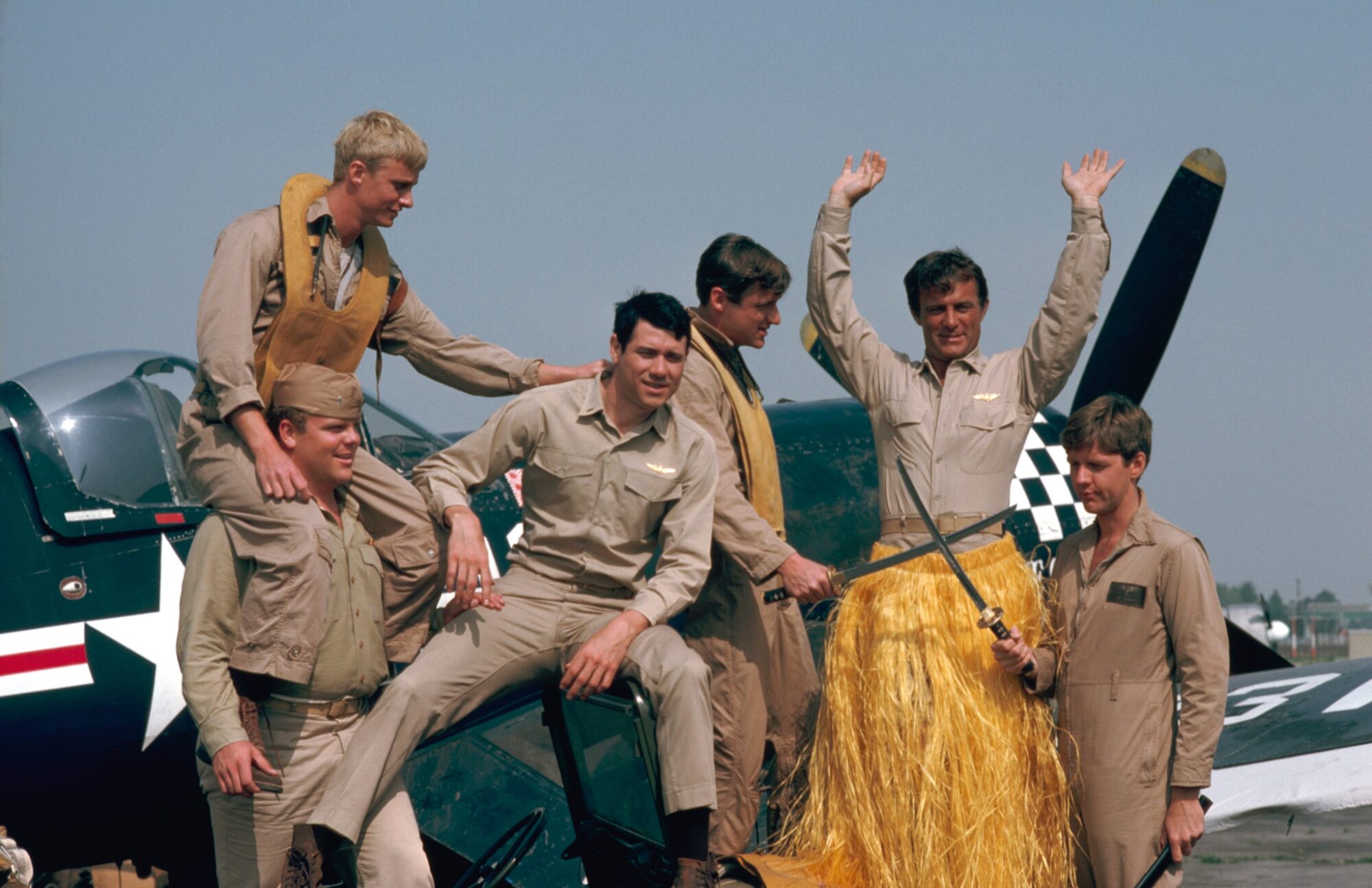 The Legend of the Black Sheep

This article appears in: October 2019

The good guys won, and they celebrated hard. Their hijinks were great fodder for the television audience, and the legend of the Black Sheep Squadron, embellished though it was by Hollywood writers, took hold. Like any good storyline for popular consumption, the Black Sheep saga is an amalgamation of fact and fiction. Still, the story of the real Black Sheep, Marine Fighter Squadron 214 (VMF-214) is quite worthy of the label of “legend.”

Major Gregory “Pappy” Boyington led VMF-214 in real combat. When he transferred to the Solomons, Boyington was already a veteran fighter pilot, having flown with the American Volunteer Group, the immortal Flying Tigers, in China, where he shot down six Japanese planes. Boyington was only 31 years old by late 1943, but he was considerably older than his charges, who nicknamed him “Pappy.” The pilots also named themselves the Black Sheep—not because of their hell-raising escapades on the ground but due to the circumstances in which their squadron was formed.

VMF-214 was activated on June 1, 1942, at Ewa Naval Air Station on the island of Oahu, Hawaii. Shipped to Guadalcanal, the squadron, originally called the Swashbucklers, completed a tour of duty flying from Henderson Field and then quietly disbanded. In August 1943, the squadron was reconstituted on the island of Espiritu Santo in the New Hebrides, where Boyington took charge of its 27 young pilots.

After flying combat missions from bases in the southern Solomons, the Black Sheep deployed to a forward base on the island of Vella Lavella and set to work shooting down enemy aircraft. During their first two weeks of active patrolling, hotshot VMF-214 pilots flamed 23 Japanese planes and claimed another 11 probable victories in exchange for five of their own pilots.

Boyington took the lead on his way to becoming the highest scoring Marine ace of World War II with 28 aerial victories, and he instilled the same aggressive attitude and offensive spirit among the Black Sheep pilots. Flying combat missions for 83 days from September 1943 to January 1944, the Americans accounted for 100 enemy aircraft in combat and shot up just as many on the ground during hazardous strafing runs. During one melee above the Japanese airfield at Kahili, 24 Black Sheep Corsairs tangled with 60 enemy fighters and shot down 20 without loss to themselves. The encounter sealed the Medal of Honor for Boyington.

The flamboyant Black Sheep appealed to major league baseball, asking for ball caps and offering to shoot down a Japanese plane for every cap they received. When the St. Louis Cardinals stepped up with 20 caps, the Black Sheep responded with 20 rising sun stickers, each representing a kill.

Boyington continued to set the standard, sometimes mercilessly taunting the Japanese, a number of whom could speak English, to rise into the air for combat. When they did, he etched a memorable record. During an escort mission over the island of Bougainville on October 4, 1943, he shot down three Japanese Zero fighters in the span of one minute. Then, on January 3, 1944, he scored his 28th victory—only to be shot down himself, ditching in the Pacific and hauled out of the drink by a Japanese submarine crew.

When the time came for Boyington to receive his Medal of Honor, the award was believed to be posthumous. But after the war, the hero emerged from a Japanese prison camp very much alive, adding to the mystique of the Black Sheep.

Just five days after their leader had been shot down and captured, VMF-214 flew its last combat mission. The squadron was disbanded, its now veteran pilots dispersed to other units. But the story of the Black Sheep was destined to live on. Today, the real Black Sheep are among the American heroes of World War II in the Pacific, their documented exploits looming much larger than the contrived drama of television.