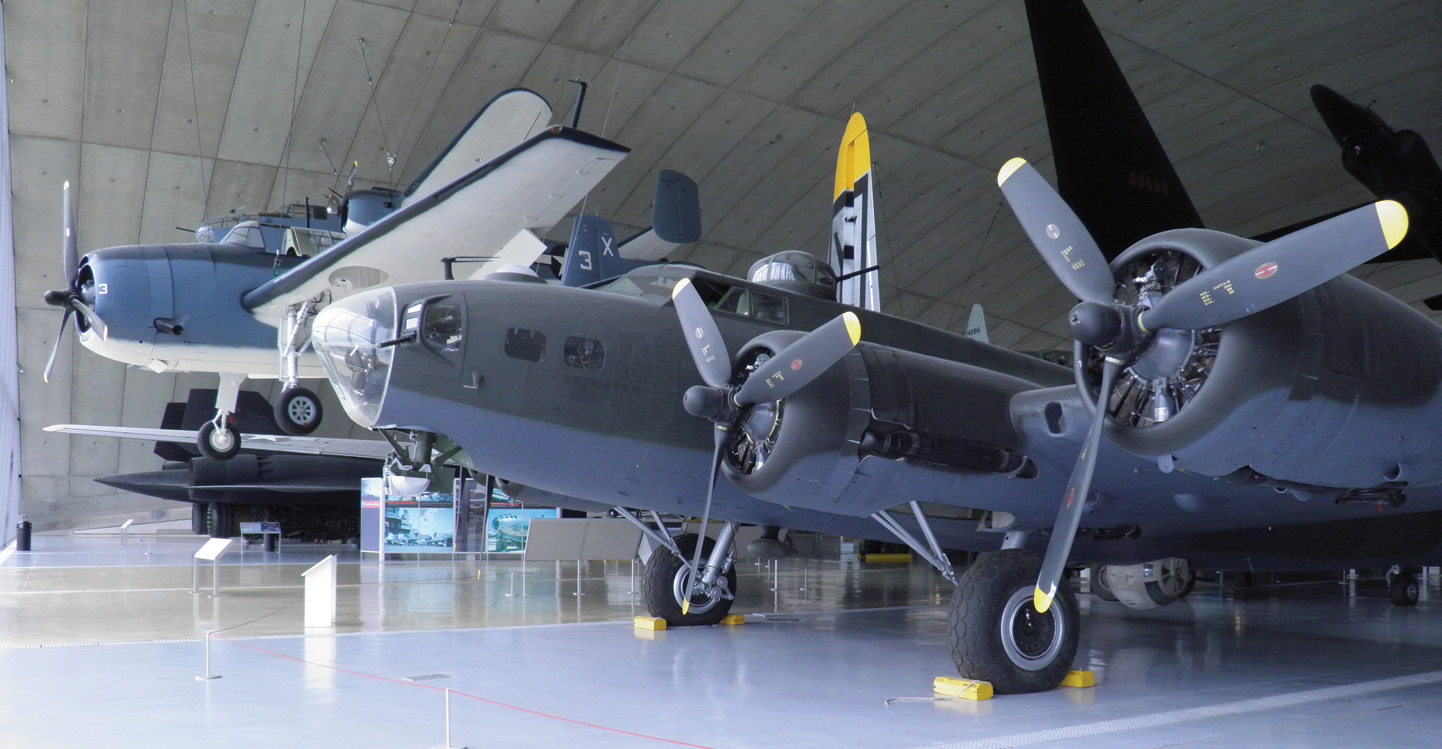 The American Air Museum in Duxford

Housing the finest collection of American aircraft outside the United States.

This article appears in: Winter 2016

In the lush, green rural community of Duxford, a 20-minute bus ride from the university town of Cambridge, the American Air Museum in Britain houses the finest collection of historic American combat aircraft outside the United States.

Part of the largest aviation museum complex in the world, the American Air Museum, opened in 1991. It tells the story of American air power and its effect on the 20th century, focusing largely on World War II in Europe.

It’s an appropriate site—Duxford was known as Base 357, the headquarters of the U.S. 78th Fighter Group and home of P-47 Thunderbolts from April 1943 and P-51 Mustangs from December 1944.

The Thunderbolts and Mustangs acted as fighter escorts on the large U.S. bombing raids over Europe and Germany. The 78th fought with distinction, claiming the destruction of 697 enemy aircraft in the air and on the ground by the end of the war. The 78th provided air cover for the Allied invasion fleet on D-Day and shot down the first German Me-262 jet aircraft. Duxford was handed back to the Royal Air Force in December 1945.

The American Air Museum, built into the ground with the wide sweeping arc of its geometric torus ring roof reminiscent of a futuristic spacecraft or a huge World War II Nissen hut, this cavernous museum houses some of the USA’s most famous warbirds and bombers, dating from World War I to the modern day.

Walking up the gently sloping asphalt path to the museum, visitors are greeted by a grim reminder of the 26,000 U.S. airmen who gave their lives while flying from British air bases during the war—more than 40 transparent plexiglass memorials, eight feet tall, line the pathway, each engraved with 150 white silhouettes of an American bomber shot down during World War II.

Inside the museum, dozens of gleaming fighters and bombers are arranged on the spotless, polished floor or hang dramatically from the ceiling, restored to pristine condition, looking as combat ready as they did in the 1940s. 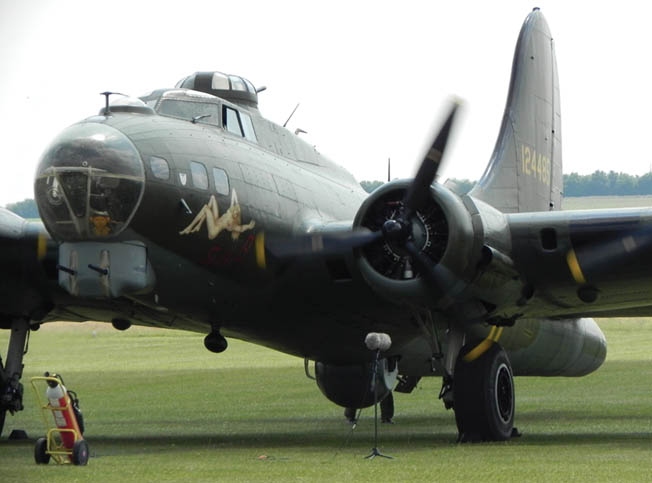 A wide, spiraling walkway around the edge of the museum descends from the entry level down to the floor, enabling a 180-degree view of such iconic World War II fighters as the Republic P-47 Thunderbolt, the North American P-51 Mustang, and bombers like the Boeing B-17 Flying Fortress and the Consolidated B-24 Liberator.

An old favorite is the U.S.’s most valuable utilitarian aircraft, the Douglas C-47 Skytrain, also known as the DC-3 or Douglas Dakota. First launched in 1935, the C-47 soon became the world’s most widely used general-purpose transport aircraft, with 10,000 being built. Used for evacuating casualties and towing gliders, it also carried U.S. and British paratroops to the Normandy invasion, Operation MarketGarden, and the Rhine crossings.

The B-24 could carry more bombs farther and faster than the B-17 and was therefore built in larger numbers than any other American aircraft in World War II. The museum’s B-24 flew 28 combat missions, including raids on Berlin and the Magdeburg oil refineries.

Three bronze busts mounted on pedestals honor the U.S. Air Force’s most influential World War II aviation generals: Carl Spaatz, Ira Eaker, and James Doolittle. Spatz was the senior USAAF officer in the European and Mediterranean Theaters; Eaker commanded the Eighth Air Force, Bomber Command in February 1942, then took command of Allied air forces in the Mediterranean; and Doolittle was one of America’s most famous aviators. He led the raid on Tokyo in April 1942, for which he was awarded the Medal of Honor. He was commanding officer of the Eighth Air Force and then moved to the Pacific Theater in May 1945.

The museum documents the rise of American air power—in 1939 an American general described the U.S. air force as fifth rate, but by 1945 the U.S. was the world’s leading air power. Consider these figures: Between 1939 and 1945, the United States spent $45 billion on aircraft, building 325,000 aircraft, including 36,000 four-engine bombers and transports. This total was greater than the combined production of Britain, Germany, and Japan.

The USAAF trained two million air force personnel during World War II, of whom 768,991 were pilots. More than two million U.S. servicemen passed through Britain between 1941 and 1945, with half a million of them involved in air operations. In spring 1944, the U.S. Eighth and Ninth Air Forces occupied more than 120 airfields and more than 9,000 aircraft. It was not uncommon for 20,000 men in 3,000 bombers and their supporting fighters, flying from 59 airfields, to be involved in a single day’s action.

The enormous social impact of American airmen is also measured in the museum. They stayed for years and their air bases, some with 3,000 GIs, were bigger than most English villages. Villagers would count the bombers leaving on their missions and anxiously count them back in, many shot to pieces and crash landing. The U.S. airmen were particularly good to the English children, lavishing them with sweets, chewing gum, and parties.

Many British troops resented the swashbuckling, well-paid Americans, but clearly British women did not. By war’s end, more than 50,000 British women had married GIs. These war brides were transported back to the U.S. in huge fleets of aircraft and ships to their new and exciting life stateside.

When the GIs left, after 1945, they were dearly missed, and the English gave full credit to their bravery and generosity, their early complaints of bragging and brashness forgotten. The American airmen gallery displays uniforms, leather flying jackets, letters, photographs, and personal memorabilia from the airmen.

Other aviation museums at Duxford include AirSpace (which includes the Airborne Assault Museum inside), Flying Aircraft, Battle of Britain, Conservation in Action, and the original 1940 Operations Room. Adjacent to the American Air Museum, the Land Warfare Hall is crammed full of tanks, armored vehicles, and artillery in full-scale dioramas.

Many renowned Cold War aircraft, including the Lockheed T-33, F-86 Sabre, F-4 Phantom, B-52 Stratofortress, Gen-eral Dynamics F-111, and Fairchild Republic A-10 Thunderbolt are also exhibited––plus a few surprises like the stunning SR-71 Blackbird, U-2 spyplane, and a lethal-looking cruise missile.

Touring Duxford takes three to five hours, and is well worth the trip. Enthusiastic guides in each museum are eager to answer your questions and show you around the various exhibits-their personalized stories will make your visit even more memorable.