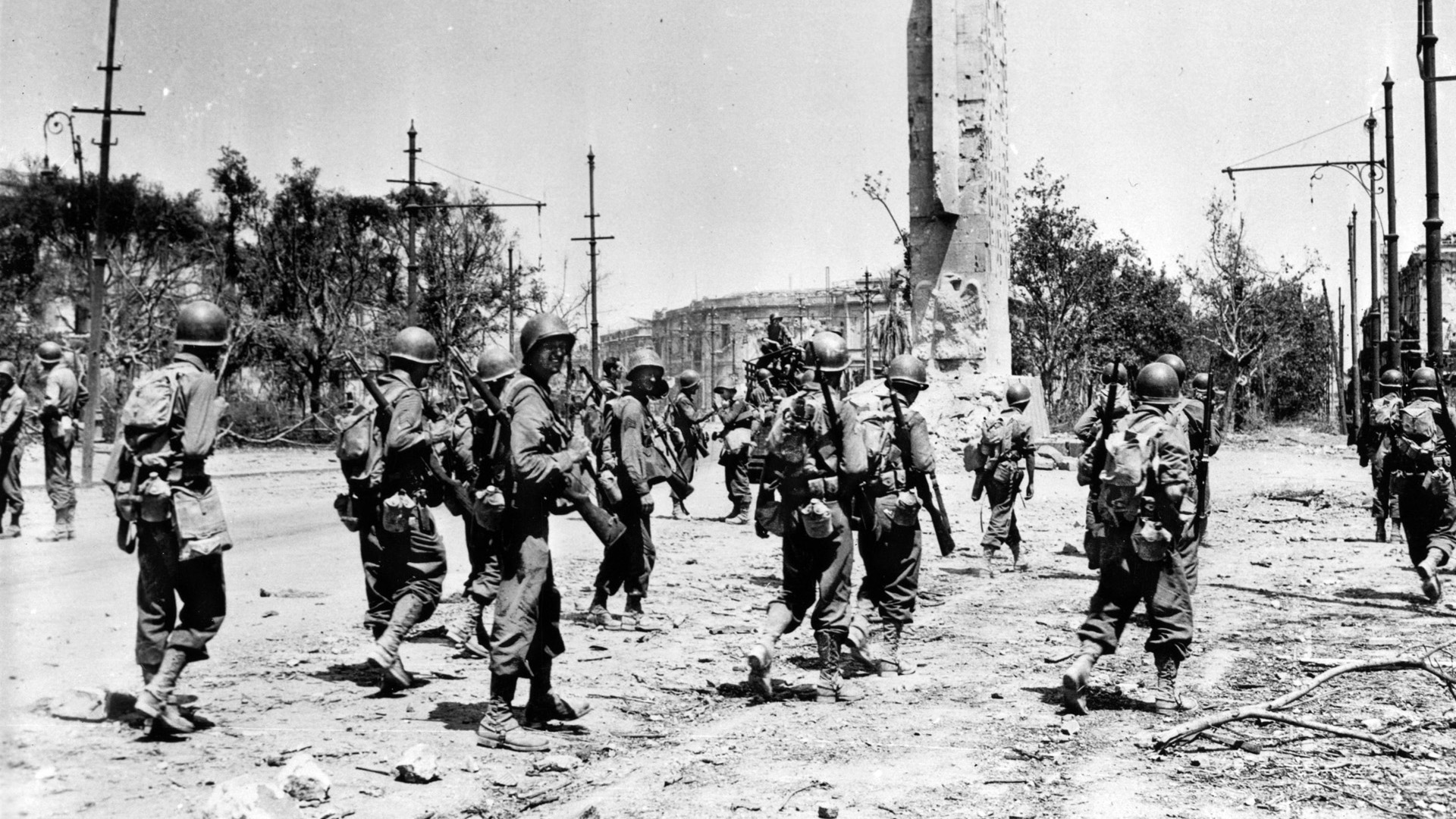 After three years of brutal warfare in World War II, the Italians in July 1943 overthrew fascist leader Benito Mussolini in the hope of obtaining a separate armistice with the Allies. But the Allied leaders had decided at the Casablanca Conference held six months earlier that they would only accept unconditional surrender of all three of the Axis powers.

Thus, the Italians found themselves in the unfortunate position, from August 1943 until the end the war, of being occupied by both Allied and German forces. The peninsula became the scene of some of the most intense fighting of the war. This was the situation that Second Lieutenant Ernest “Red Eagle” Childers, of the 45th Infantry Division, and thousands of other Allied soldiers found themselves in as they fought to liberate Italy from the Germans.

Childers was born on February 1, 1918, in Broken Arrow, Oklahoma. He was the third of five sons born to Ellis Childers, a member of the Muskogee Creek tribe and a lawyer, who served in the Creek House of Lords before Oklahoma became a state in 1907. Raised on a farm that was his father’s original tribal allotment, he was taught at an early age by his father to shoot a rifle.

The Childers faced considerable struggles after the father’s death in 1930. Ernie, who was the best shot in the family, had the heavy burden of feeding the family during the Great Depression. Life was particularly hard for families in Oklahoma owing to the severe drought and erosion resulting from the dust storms in the Great Plains.

Childers said later in life that he honed his shooting skills hunting rabbits for the family to eat. His mother would give him one .22-caliber bullet each day. “I learned to be a very good aim, because if I missed, we didn’t eat,” he said in an interview with an Oklahoma newspaper.

Childers graduated in 1937 from Chilocco [OK] Indian School, where he learned mechanics and boxed. Upon graduation, Ernest and some of his school friends enlisted in the Oklahoma Army National Guard as a way to earn extra money. He was assigned as a private, but earned a promotion to sergeant in Company C, 180th Regiment, 45th Division. It was one of two regiments in the division that included 2,000 Native Americans from 52 tribes.

The 45th Division, nicknamed the Thunderbird Division, was one of 18 National Guard units that were activated early in the war. The Thunderbird symbol, which became the unit’s insignia, was a Native American symbol of good luck and magic. The division, led by Maj. Gen. Troy H. Middleton, first saw action in Operation Husky, the invasion of Sicily.

The division was proud of its Native Americans, and on the night before the division embarked for Europe, an artillery officer organized a war dance around a roaring bonfire. The 21,000 soldiers in the 45th Division set sail in 19 ships from Hampton Roads, Va., on June 8, 1943. During a one-week layover in Oran, Algeria, on its way to Sicily, Lt. Gen. George S. Patton, the U.S. Seventh Army commander, visited the 180th Regiment to advise its soldiers on what to expect and how to behave in battle. Patton told them to accept surrender from enemy troops only after they had overrun an enemy unit. “Kill devastatingly,” he told them.

After a one-week layover in Oran, Algeria, the armada continued to Sicily. Unfortunately for the soldiers and officers that would go ashore, the Army landing-craft coxswains with which they had trained in the Chesapeake Bay were diverted to the Pacific Theater, and the Navy crewmen replacing them were unfamiliar with the infantry landing ships (LSI) they would operate to shuttle the men to shore. Fifty-three hundred Allied troops organized into 67 battalions came ashore in the first wave on 26 beaches that stretched across 105 miles of coastline in southern Sicily.

The 45th Division had a rougher landing than either Maj. Gen. Terry Allen’s 1st Infantry Division or Maj. Gen. Lucian Truscott’s 3rd Infantry Division, which came ashore further west, at Gela and Licata, respectively. Right up to the point that the soldiers were ordered to their assembly areas for loading onto the LSIs, many of the Native Americans of the 45th Division were playing poker and sharpening their knives, eager to use them on the Italian soldiers defending the largest Mediterranean Island.

The soldiers of the Thunderbird Division braved 12-foot swells as they rode to shore in their LSIs and then had to fight their way ashore through six-foot surf. As they did so, a pair of destroyers fired white phosphorous shells that slammed into the Italian machine-gun pillboxes and gun batteries.

Once the Italians on the island’s southern coast had been vanquished by the Americans, Patton directed Middleton to drive north toward the center of the island to reach the north coast. With the Italians steadily losing the will to fight, the Germans took over the island’s defense. Field Marshal Albert Kesselring skillfully used the island’s mountainous terrain to his advantage, slowing the Allied advance north towards Messina.

The 45th Division fought its way through Caltanissetta on July 19 and four days later reached coastal Highway 113. Advancing east along the coastal road, they ran into the Germans. Patton exhorted Middleton to push his troops hard. “This is a horse race in which the prestige of the U.S. Army is at stake,” Patton told him. “We must reach Messina before the British.” It was during the hard fighting in Sicily that Childers was promoted to second lieutenant.

Kesselring was forced on the night of August 11-12 to withdraw the Axis troops to the mainland. To his credit, he succeeded in getting 40,000 crack German troops, as well as 60,000 Italian troops, across the Strait of Messina to Calabria.

Next, the 45th Division participated in Operation Avalanche, the Allied landings near the port of Salerno, on September 9. After the beaches had been secured, the Americans and British began to fight their way inland. Kesselring ordered the German forces at Salerno to pull back to stronger positions inland on September 16.

The Allies followed on their heels. In the days that followed, Middleton directed elements of the 45th Division to capture the town of Oliveto. The mountaintop town lay 35 east of Salerno.

As a steady rain fell on the morning of September 22, Childers advanced against enemy positions with his company. As he did so, he slipped in a shell crater, fracturing his foot. He made his way to an aid station to get treatment for his foot, but a German mortar round landed next to the aid station, killing the doctor on duty. Childers stoically returned to his company. When it came under heavy fire from Germans holed up in several houses on a hilltop, the second lieutenant gathered eight men for a mission to silence the enemy machine guns.

Loaded down with their 60-pound packs, Childers and his men worked their way up the rough terrain toward the enemy gun emplacements. As they neared their objective, they took cover behind a rock wall overlooking a cornfield. Childers instructed his men to lay down covering fire while he continued forward toward the houses.

German snipers in one of the houses fired at Childers, and he responded by spraying the house with gun fire, which killed two of the Germans inside. He continued his one-man assault, taking out the Germans manning one of the machine-gun nests.

He then crawled behind another house, where a second machine gun nest was located. He lobbed rocks at the machine-gun team, hoping that the two enemy soldiers would think they were grenades. His trick succeeded, and the Germans emerged from their protected position. He shot one of the Germans, and another American killed the other one, thereby knocking out a second-machine gun position. Childers then continued up the hill, where he single-handedly captured the German mortar observer in another house.

“The German must have been watching the action, because he came out toward me. I was on my knees training my 30-caliber carbine on him,” said Childers. “I was yelling to one of my men, ‘Take him prisoner!’ My sergeant yelled back, ‘Shoot the bastard.’ I yelled, ‘I can’t! I’m out of ammunition.’”

Childers said his body was wet with perspiration since the German was fully armed and Childers was holding an empty rifle on him. The captured mortar observer “was the only surviving German in the entire action that day,” he said.

After recovering from his wound in North Africa, Childers went into action again with the 45th Division at Anzio on January 22, 1944, where he was wounded a second time. While recovering in Naples, he learned that he would receive the Medal of Honor.

On April 8, 1944, Lt. Gen. Jacob L. Devers, deputy commander of the Mediterranean Theatre, presented Childers with the medal “for his conspicuous gallantry and intrepidity” in the action at Oliveto,” according to the citation. “The exceptional leadership, initiative, calmness under fire and conspicuous gallantry displayed by Childers were an inspiration to his men,” the citation stated.

Childers then went on a well-deserved leave back to the states. Childers was welcomed as a hero in his hometown on April 26, 1944, which honored him with the largest parade in its history. During this time, he met with U.S. President Franklin D. Roosevelt at the White House.

Childers remained in the army through the Korean War and the first few years of America’s involvement in Vietnam. He retired in 1965 as a lieutenant colonel and returned to Oklahoma. His hometown erected a nine-foot statue of Childers in uniform at Veterans Park in 1994. A middle school in the town was subsequently named for him, as well as a Veteran’s Administration outpatient clinic in Tulsa.

Ernest Childers died in Tulsa on March 17, 2005, at the age 87. He was buried with full military honors in Broken Arrow, not far from the home where he had grown up.