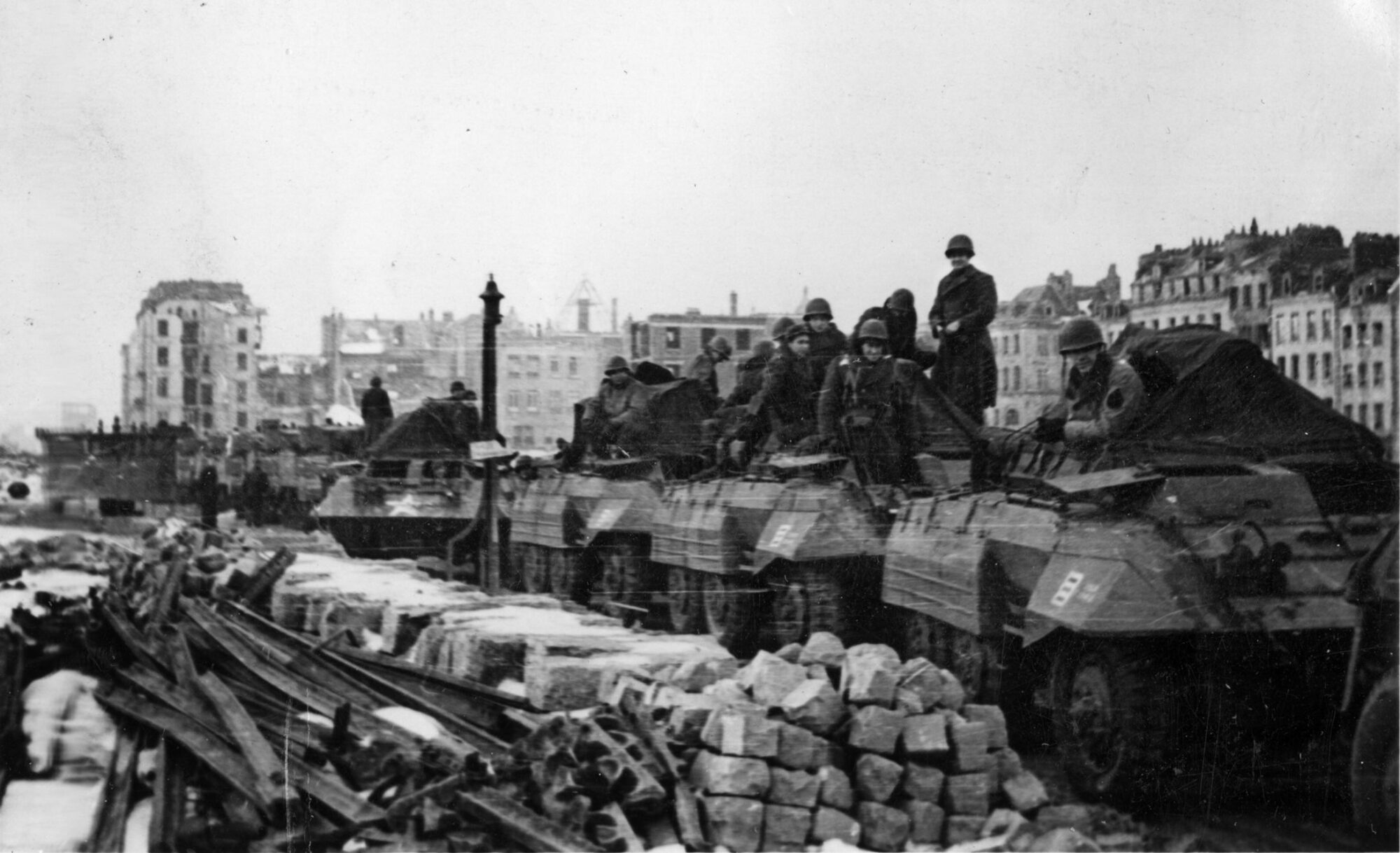 Photo Credit: The 809th Tank Destroyer Battalion prepares to move out from the French port of Le Havre on January 22, 1945. The equipment consists of M20 command and reconnaissance cars belonging to the 809th’s A Company. The M20 was a variant of the M8 Greyhound, with the turret and 37mm cannon removed.

Tank Destroyers in Action! Photos of the 809th on the Front

An Army major of the 809th Tank Destroyer Battalion photographed his unit’s odyssey across Europe during World War II.

This article appears in: Summer 2013

The 809th Tank Destroyer Battalion was an independently attached unit of the U.S. Army. The battalion was activated on March 18, 1942, at Camp Forrest, Tennessee, and remained in the United States through most of the war. The unit shipped out for the European Theater of Operations (ETO), arriving in Liverpool, England, on December 8, 1944. The battalion arrived at the port of Le Havre, France, on January 20, 1945, equipped with M18 Hellcat tank destroyers, M8 Greyhound light armored cars, and M20 scout cars. The battalion commanding officer throughout the war was Lt. Col. W.R. Lawson, Jr.

The Hellcat was manufactured by Buick, and was formally called the “76mm Gun Motor Carriage M18.” It weighed 17.7 tons, was lightly armored, and was the fastest tracked armored fighting vehicle during the war (top speed 60 mph). This high speed was useful in flanking German tanks, which had relatively slow turret traverse speeds, and allowed the tank destroyer to shoot at the enemy’s thinner side or rear armor.

In late April, the battalion converted to M36 Jackson tank destroyers and saw additional combat action in the Harz Mountains. Battalion campaign credits include the Rhineland (September 15, 1944, to March 21, 1945) and Central Europe (March 22 to May 11, 1945).

My father, Major Louis R. Fausset, was the battalion’s S-3 (operations officer) and took a number of photos of his unit’s time in the ETO. He attained the rank of full colonel and retired from the Army in 1972. He returned to college on the G.I. Bill, and graduated from the University of Idaho with a bachelor’s degree in civil engineering in 1977, the same day I graduated from Boise State University. He passed away on November 10, 1999, at the age of 80, and is buried in Arlington National Cemetery.

2 thoughts on “Tank Destroyers in Action! Photos of the 809th on the Front”