Inventor John Griffen’s 3-inch Ordnance Rifle was one of the safest, most reliable, and most accurate cannons of the American Civil War.

Teams of horses from four Confederate batteries churned the ground with their hooves as they pulled artillery onto the southern crest of Benner’s Hill just east of Gettysburg at 4 pm, July 2, 1863. Once the Southern artillerymen had dropped their guns, they began loading and firing against the Union lines more than three-quarters of a mile away. The batteries belonged to Andrews’ Artillery Battalion of Maj. Gen. Edward Johnson’s Division of Lt. Gen. Richard Ewell’s II Corps. The crews were under orders to make a strong show of force against the Union units opposite them. The purpose of the demonstration was to pin down Yankees units that might otherwise have been sent to reinforce the Union left, which was at the time under heavy assault by Lt. Gen. James Longstreet’s I Corps.

It was an almost suicidal order as the Union artillery batteries countering the fire, some of which were stationed on higher ground on East Cemetery Hill, could bring converging fire against the 14 Confederate guns. The Confederates positioned six 20-pounder Parrott rifled guns further back. Andrews’ Artillery Battalion, directed that day by 19-year-old Major Joseph Latimer, did its very best against fearful odds. “Benner’s Hill was simply hell infernal,” wrote a member of Captain William Brown’s Chesapeake Artillery. “We were directly opposed by some of the finest batteries in the regular service of the enemy, which batteries, moreover, held a position to which ours was but a molehill.”

The Federals responded with 28 guns from the Union I and XII Corps. The majority was on East Cemetery Hill, but one battery was on Stevens’ Knoll, a spur between Cemetery Ridge and Culp’s Hill, and a few guns were on Culp’s Hill. At the outset of the long-range artillery duel, a Union rifled gun from East Cemetery Hill scored a direct hit on a Confederate artillery chest setting off a series of secondary explosions further increasing the chance of the Rebel gunners getting killed or maimed while servicing their guns. Nevertheless, for a time at least, the Confederates gave as good as they received. The Southern artillerymen fired a shell that struck a Federal caisson causing considerable damage and panicking nearby horses hitched to limbers. The advantage throughout the contest lay with the Union gunners, whose rifled guns inflicted frightening damage on Andrews’ Artillery Battalion as the minutes dragged by.

The skill of the Union artillery crews, coupled with superior artillery and position, resulted in Latimer requesting permission from Johnson to withdraw his guns after about 90 minutes in action. In the process of directing the withdrawal of the guns, Latimer was severely wounded in the arm by shrapnel. He would die one month later. The ill-conceived artillery demonstration resulted in a horrible harvest of death and major loss of equipment for Andrews’ Artillery Battalion. Skilled Union artillery crews firing rifled guns were responsible. Nine men were killed and 30 wounded from Andrews Artillery Battalion when the duel was over.

The origins of the 3-inch Rifle, whose shells swept Benner’s Hill with demonic fury the second day of the titanic struggle at the Battle of Gettysburg, can be traced to Philadelphia, Pennsylvania. In the decade before the war, American cannon makers were determined to craft barrels from iron to offset the shortage of copper used to make pre-Civil War bronze light field artillery.

In the first half of the 19th century, the U.S. Army Ordnance Board vacillated between whether it believed bronze or iron was the best metal to use. Some metallurgists argued that iron was too brittle, and therefore the barrels were more prone to stretching and warping than bronze. The primary complaint, and a valid one, was that wrought iron barrels produced by hammer failed to produce barrels with consistent and uniform strength. Nevertheless, iron offered the advantage of allowing cannon makers to turn out lighter barrels, and this was particularly important for field batteries where mobility on the battlefield was critical. 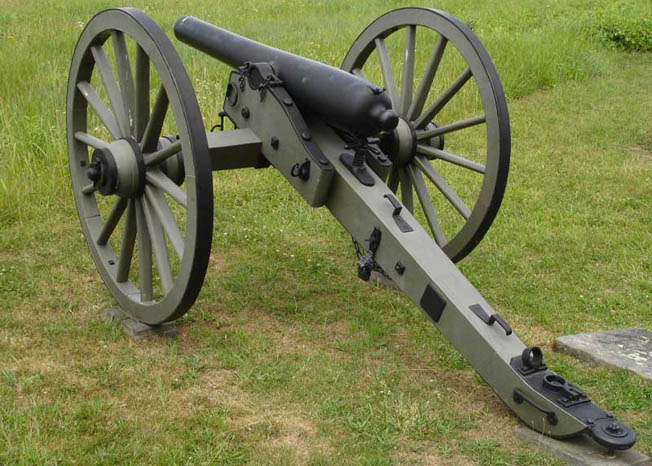 In the 1830s, the Ordnance Board decreed that field guns would henceforth be made from bronze, but that did not stop visionary cannon makers from trying to develop viable iron barrels for field guns. A disaster occurred in the following decade that served as a further setback for advocates of wrought iron barrels. A long-barrel ship cannon made from wrought iron known as “The Peacemaker” exploded during a demonstration for top officials of the Tyler Administration aboard the steam frigate USS Princeton on February 28, 1844. The explosion killed eight people, including the secretaries of state and navy. The unfortunate incident did not bode well for the future of wrought iron cannonmaking.

Two rifled guns became ubiquitous in the Union army. One was the 10-pounder Parrott, and the other was the 3-inch Rifle. Captain Robert Parrott, who had graduated from West Point and subsequently became superintendent of the West Point Foundry, Cold Spring, New York, developed a cast iron rifled cannon in 1860 that bore his name. Parrott designed from cast iron a 10-pounder and a 20-pounder that had a 2.9-inch bore and 3.67-inch bore, respectively.

Parrott manufactured the tubes using the cast iron process. His design included a reinforcing bar made from wrought iron that was wrapped around the breech to furnish extra support for the tube. In theory, it was a sound design, but in practice it proved otherwise because welding the band onto the barrel put stress on the tube. As a result, the Parrott rifles occasionally burst when fired. Nevertheless, the Parrott rifles entered full production the first year of the war.

One Northern cannon maker was determined to find a sound process for making field guns out of cast iron. John Griffen, the superintendent of Safe Harbor Iron Works in Phoenixville, Pennsylvania, a subsidiary of Phoenix Iron Company, formulated a way to make cannon tubes from iron by passing the iron through a rolling mill instead of using the traditional method of hammering the iron in the forge.

At the start of the process, Griffen’s workers welded together iron rods to form a core. Then, they wrapped five layers of wrought iron around the core on a lathe. The wrapped layers were then welded together. Afterwards, the workers removed the core inside and put a plug in the breach. By using a rolling mill rather than a hammer, the workers were able to create a finished product with uniform strength throughout the tube.

The prototype introduced in 1854 was known as the Griffen Gun. In the years leading up to the war, Griffen made various refinements to it, such as adding grooves to fire rifled shells, and eventually it became known as the 3-inch Rifle. Griffen shipped his 700-pound Griffen Gun, which fired a 6-pound shell, to Fort Monroe, Virginia, for testing. It languished for two years before the Ordnance Department tested it. In the meantime, Griffen applied for and received a patent for his wrought iron gun on December 25, 1855.

Orders for War: The 3-Inch Rifle at the Battle of Gettysburg

The 3-inch Rifle was not designed for close action like the M1857 Napoleon, and therefore could not equal the bronze smoothbore when it came to repelling infantry charges at close quarters. It excelled in long-range fire against enemy troop formations and artillery. The 3-inch Rifle also was devastating when used in a duel between opposing batteries. Not surprisingly, its lightweight barrel made it the preferred choice for horse artillery units because it could be pulled faster than other field artillery.

In addition to its excellent range and accuracy, the 3-inch Rifle also was an extremely safe gun as shown by the tests done on Griffen’s gun at Fort Monroe. The only time a 3-inch Rifle burst during the war occurred on the first day of the Battle of the Wilderness. On May 5, 1864, the barrel of a 3-inch rifle in Captain R. Bruce Ricketts’ Battery F, 1st Pennsylvania Light Artillery burst when its crew was firing double canister in an effort to repel the assault of Confederate Lt. Gen. A.P. Hill’s III Corps against Maj. Gen. Winfield Scott Hancock’s II Corps along the Orange Plank Road.

The South had great difficulties finding the materials necessary to manufacture its own rifled cannon and sought whenever possible to capture 3-inch Rifles in battle, which they then integrated into their batteries.That was, of course, an unreliable procurement method. Therefore, the Confederate government produced facsimiles at the Tredegar Iron Works in Richmond, Va., and at the privately owned Noble Brothers & Co. iron works in Rome, Georgia. Even so, the ammunition the Confederates used for the 3-inch Rifle was often unreliable, thus reducing the effectiveness of the guns.

At the Battle of Gettysburg, 141 of the approximately 360 guns, or 40 percent, of the cannon fielded by the Army of the Potomac were rifled guns, and nearly all of the rifled guns were 3-inch rifles. Whether engaged in counterbattery fire or long-range shelling of enemy troops and equipment, the 3-inch Rifle was a ubiquitous part of the artillery arm of the largest Union armies. For the Confederates, a captured Union 3-inch gun was, without a doubt, a valuable war prize. The 3-inch Rifle was a key factor in some of the greatest clashes of the Civil War, for example, at Antietam and Fredericksburg, where it gave the Union Army a decisive edge over Confederate artillery.