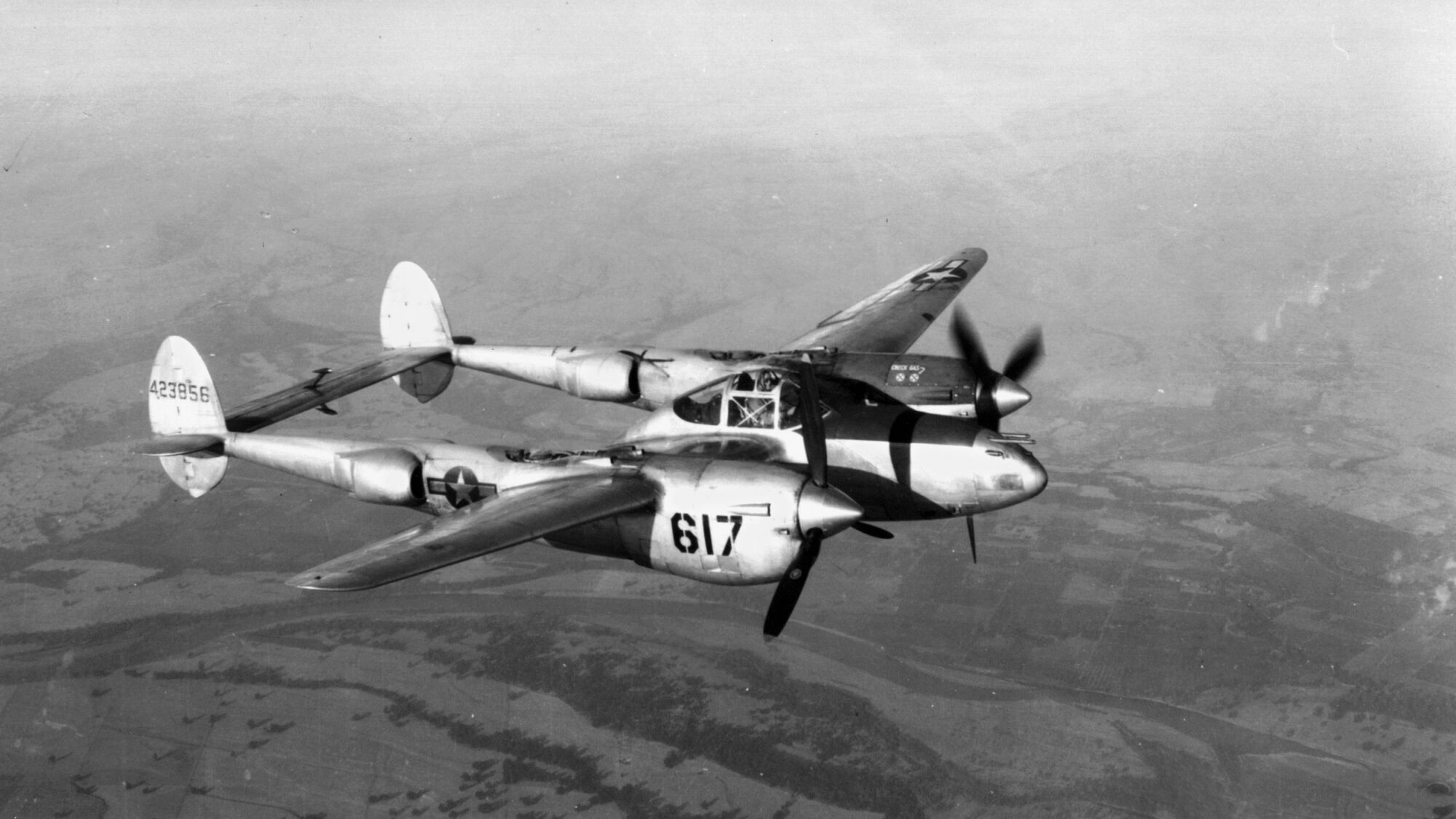 Jim Kunkle: Flying the P-38 Lightning… and Almost Everything Else

How a few minutes of heroism over Aachen earned Jim Kunkle his Distinguished Service Cross.

This article appears in: Fall 2010

Jim Kunkle did it all. He flew the Lightning. He shot down German fighters. He earned America’s second highest award for valor in battle. During the mid-1940s’ transition from props to jets, he piloted almost every other fighter and then, when he took his uniform off, Kunkle continued flying. He still flies today, at age 88. Americans don’t use the term as much as our British friends, but James K. Kunkle, of Santa Ynez, California, is a “total aviation person.”

Jim Kunkle lived his dream. “Every boy in the late 1930s wanted to be a P-38 Lightning pilot,” says Kunkle. The sleek, silvery image of Lockheed’s twin-engine, twin-boom fighter grabbed the hearts of a generation of prewar youngsters, few as early or so firmly as Kunkle.

In a wartime snapshot from his scrapbook, with parachute in one hand, oxygen gear in the other, a “50-mission-crush” hat on his head, and a Lightning behind him, Kunkle looks like actor Sam Shepard, who played a pilot (Chuck Yeager) in a movie (The Right Stuff). Kunkle conveys a little of the actor’s laid-back, aw-shucks restraint. He said it was “no big deal” when he got caught up in a pitched battle outnumbered by Messerschmitts and Focke-Wulfs. “You can’t say you wanted to be in combat,” said Kunkle. “I just wanted to fly.”

Born in New Kensington, Pennsylvania, in October 1922, Jim Kunkle moved to West Hollywood, California, as a boy. He graduated from Beverly Hills High School in 1940. “I had friends at Lockheed in 1937 who told me they were developing a new fighter,” he says. “I was in the National Guard and met Eldo Peterman, a chief engineer for Lockheed. But I had to get out of the Guard when they were federalized in 1940 because I was not yet 18 on the first 10 P-51 Mustangs.

“When I returned to school in September 1941 [he attended Cumnock College in Los Angeles], I switched to Lockheed, which had a night facility where they assembled P-38 Lightning wing sections. I also rode horses. I was riding on a Sunday morning when a friend who was an actor came by and told us that Pearl Harbor had been attacked.”

Suddenly the war was on and America needed military pilots. When the Army lowered the age restriction for pilot training, Kunkle qualified for the Army Air Forces’ flying class 44-A. He completed pilot training at Williams Field, Arizona, and received his pilot wings and commission to second lieutenant in January 1944.

First Mission Over the Channel

His first mission was an armed reconnaissance flight across the Channel just after the June 6, 1944, D-Day invasion of Normandy. He and his fellow pilots attacked German trains, vehicles, and airfields. Kunkle was not only flying the aircraft he wanted, he was flying it in combat.

He has a balanced perspective on the P-38 Lightning. “When everything worked right, it was great,” Kunkle says. “On most twin-engine aircraft, you’ll have one engine that’s critical and one that isn’t. I own a Cessna 320 today. Both props on my Cessna turn in the same direction. On the production P-38, the props turned outward in opposite directions, which meant that both engines were critical and you had to be really careful on takeoff.”

The Lightning was big, but not roomy. “The cockpit was a little tight,” Kunkle remembers. “I would find my head rubbing up against the top of the canopy. You had fairly long travel on the rudder pedals, but you got used to it. The critical problem with us was we didn’t have much heat in the cockpit. On high-altitude missions, it was very cold. And we didn’t have the engine in front of us to help keep us warm. Bomber guys had those heated blue union suits that they wore, but we tried heated clothing and it didn’t work for us.”

A Run-In With the “Abbeville Boys”

As part of the U.S. Ninth Air Force, Kunkle’s squadron went ashore on the European continent after D-Day. By July 1944, his fighter group was operating from A-3 Cardonville airfield near Omaha Beach.

A month later, when the German Seventh Army was trapped in the Falaise Pocket, Kunkle flew close air support missions that strafed and dive-bombed German troops as they withdrew from the Allied counterattack. He flew as many as three missions a day. He felt the P-38 Lightning held up well when being rapidly turned around on short notice.

Kunkle’s most memorable mission took place on September 16, 1944. “We were up over Aachen,” he says. “The 1st Infantry Division was trying to take Aachen, and we were in there to support the Army. My 401st Fighter Group was providing top cover for two squadrons down on the deck”—a position where fighter pilots waged a war that often seemed very personal, an almost eyeball-to-eyeball battle with Wehrmacht troops.

“I was number four in the last flight. I noticed separate gaggles of German aircraft coming in at our five- or six-o’clock position. I thought they were attacking my entire group but when I broke into them, they stayed with me.”

It was supposed to be an armed reconnaissance mission, but it quickly became a dogfight, with Kunkle the lone American dog. In later years, Kunkle was told that the “several gaggles” of Focke-Wulf Fw-190s and Messerschmitt Bf-109s came from the Luftwaffe’s JG26 (the “Abbeville boys”), famous earlier in the war for their yellow-painted noses.

According to official records, after Kunkle was unable to reach his flight leader on the radio, he “alone unhesitatingly pulled away from his formation and vigorously attacked the enemy, immediately destroying one of his aircraft.”

Although this aerial victory and a subsequent one were officially confirmed, Kunkle says that he does not know today which of the two types of German fighter he shot down. In the confusion that followed the battle, he was initially thought to have downed five aircraft, a figure later adjusted to two. “I was in the middle of them and did a lot of shooting at both 190s and 109s,” says Kunkle. “I’m pretty sure the ones I hit were 190s.”

After he bagged his first kill, Kunkle was attacked from the rear and above by Fw-190s and Bf-109s. He noted that the Luftwaffe pilots “started walking their cannon shells up my left wing,” and he soon became aware of heat and smoke in the cockpit.

“On the P-38, the cold-air vent was down by your left knee,” he says. “Your main and reserve fuel tanks were also on the left side, where that duct is, and the Germans hit both tanks. The flame looked like a blowtorch coming through the air vent into the cockpit.” For an instant, there was very little smoke and then smoke began to fill the canopy. Kunkle suffered burns on his face, neck, and hands, and the flames seemed about to consume him. He put the danger out of his mind and continued to attack the German fighters that seemed to be all around him. He fired at several and shot one down. Still in the fight, he broke off from combat only when his P-38’s left main fuel tank exploded. Kunkle jettisoned his canopy with fire lashing at most of his body. He does not remember whether he climbed out or was blown out of the P-38’s cockpit, but he left it abruptly at about 4,000 feet, tumbling, his parachute flapping at his back. Certain he was behind German lines, he plummeted through low cloud cover. He feared that if he opened the parachute too early, German ground troops would fire at him. He pulled the ripcord when the ground looked close.

Expecting to become a prisoner of war, he barely landed on the Allied side of the rapidly eastward-moving front line. Soldiers of the 1st Infantry Division, amid the fight to take Aachen, saw Kunkle’s dogfight, watched him descend from the sky, and rescued him.

Badly burned and “busted up,” Kunkle never flew again in Europe; he was in hospitals for months. For heroism in his lone-wolf air battle, General Carl “Tooey” Spaatz, the U.S. air commander in Europe, decorated Kunkle with the Distinguished Service Cross in Paris, France, in February 1945.

“I also got a Purple Heart and some Air Medals,” says the laid-back Kunkle. He seems to have never counted his awards; such things appear not to matter to him. He does not know the serial number of the P-38 he flew and has never counted the dozens of aircraft types that eventually filled his logbook.

Kunkle was told he would never fly again. In those days, when an officer was transferred, he carried his records with him. Kunkle simply reached into his medical file and yanked out the pages that spoke of his wounds and of being grounded. By the time he arrived in Portland, Oregon, to be an engineer (and, as it turned out, test pilot), there was nothing in his “201 file” to suggest that he was anything other than a medically fit, highly qualified military pilot with significant combat experience.

In the mid-1940s, as World War II ended and the jet age began, the Army Air Forces did not yet have a test pilot school. In the Portland depot, where everything in AAF inventory came and went, Kunkle became a test pilot because his commander said he was one.

At Portland—site of the present-day Portland International Airport and Oregon Air National Guard unit—Kunkle piloted most of America’s major multi-engine planes: the B-17 Flying Fortress, B-24 Liberator, B-25 Mitchell, and B-26 Marauder. He also logged pilot-in-command time in the propeller-driven P-39 Airacobra, P-47 Thunderbolt, and P-63 Kingcobra, and he flew Navy FM-2 Wildcat and F6F-5 Hellcat fighters. Finally, he flew America’s first operational jets—the P-80 Shooting Star and P-84 Thunderjet.

“I Wanted to Stick Around to Fly Jets”

“I wanted to stick around to fly jets,” says Kunkle. He left active duty in 1948, a few months after the U.S. Air Force became an independent service branch, and entered the civilian aviation field. Since then he has operated several aviation businesses and flown dozens of aircraft. His son, James W. Kunkle, also called Jim, is co-owner of Central Coast Jets, the thriving fixed-base operator at Santa Maria, California.

Kunkle and his second wife, Ruth Vitale, live in Santa Ynez in central California. The aircraft he owns today include a Cessna 320 twin-engine aircraft (“I bought that one in 1970”); a Cessna 185 on wheels; another Cessna 185 on amphibious floats; an Aeronca Champion with a 75-horsepower engine; a Super Cub; and a Piper PA-12 three-place version of the Super Cub. His favorite, though, is a red, three-quarter-scale replica of a 1929 Travel Air 4000 biplane. Kunkle says he acquired the replica from another “total aviation person,” Kenny Wolf, who is “a wonderful friend” and is in excellent health, though Wolf recently stopped flying at age 95.

Jim Kunkle said he had 8,000 to 9,000 air hours altogether. He is active in a veterans’ organization for those who have received the United States’ second highest award for valor.

“The opportunity to fly and be taught to fly, and to fly all that equipment––it’s a privilege you don’t forget,” says Kunkle.

This article was originally published in the Fall 201o issue of WWII Quarterly Magazine.

2 thoughts on “Jim Kunkle: Flying the P-38 Lightning… and Almost Everything Else”