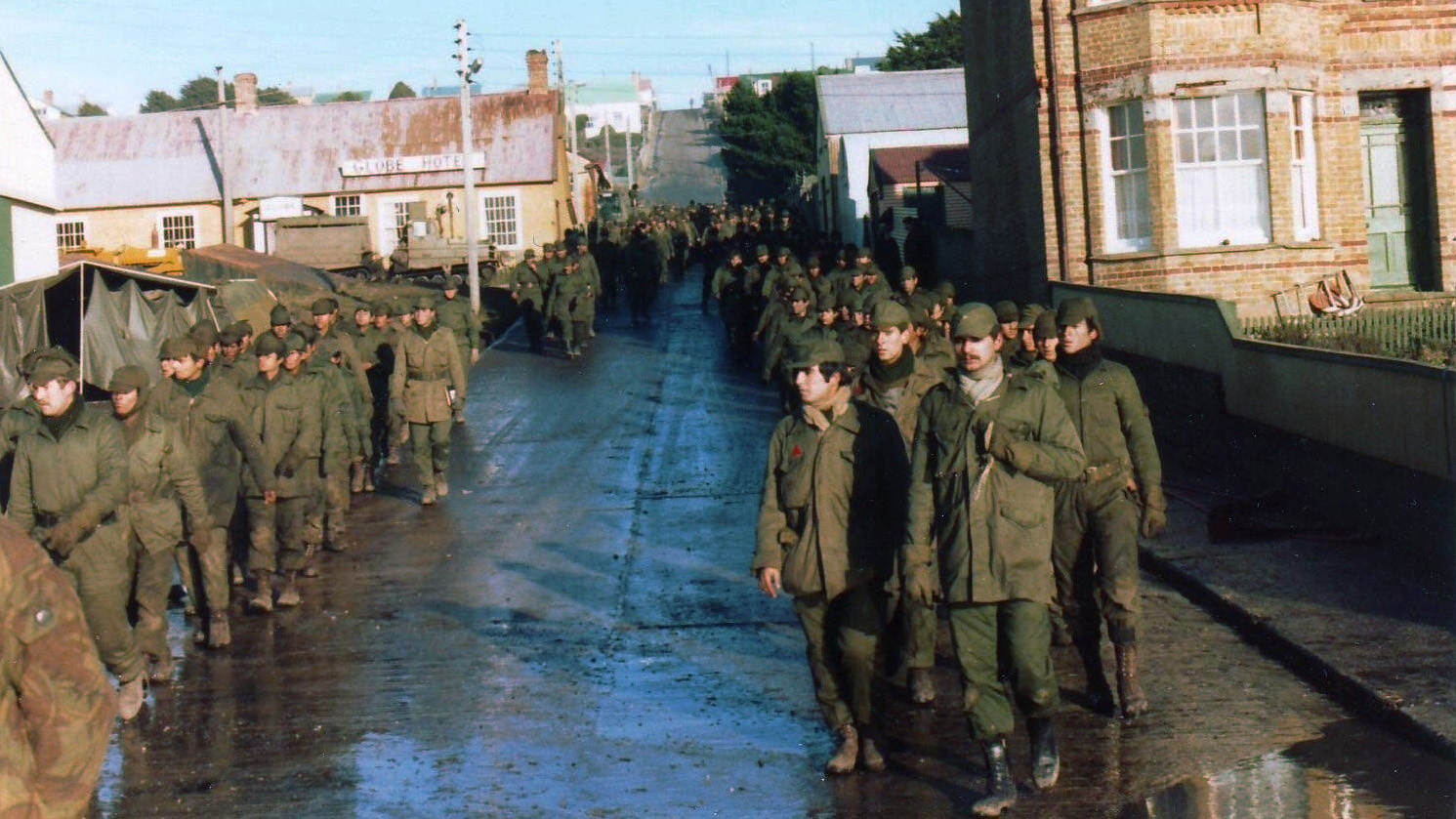 The Falklands proved to be a dynamic theater of conflict.

The British vessel with its bright red hull seemed out of place in the waters of Stromness Bay off the east coast of South Georgia Island on March 23, 1982. In contrast, the drab buildings of the abandoned whaling station at Port Leith nestled within the bay, with their white walls and drab brown roofs, seemed a perfect match for the treeless tundra and snow-capped peaks of South Georgia Island.

The ice patrol vessel HMS Endurance, recently arrived from Port Stanley in the Falkland Islands 1,550 kilometers to the west, had been sent as a warning to a group of about 40 Argentine scrap metal workers who had breached protocol on their arrival in the harbor on March 19. Aboard the Endurance were 24 British marines from the Stanley garrison.

The Argentine workers, who had come to dismantle the storage sheds on the pier under a previously arranged agreement, failed to get a landing permit from the British Antarctic Survey base 20 miles away at Grytviken upon their arrival. Compounding the problem, the workers had hoisted the blue and white Argentine flag in the harbor as they began their work dismantling the metal sheds. British accounts of the incident state that Argentine marines had infiltrated the work group disguised as scientists, but precise details remain as opaque as the fog that routinely cloaks the island. The ruling military junta in Argentina had hoped to gain control of the Malvinas, as they called the Falkland Islands, through diplomatic means. Frustrated with the British decision to break off sovereignty discussions earlier that year, the Argentine leaders turned to military options. The arrival of the Endurance upped the stakes. The day after the transport vessel ARA Bahia Buen Suceso sailed away from South Georgia with all but a few of the workers, the armed Argentine naval survey ship ARA Bahia Paraiso sailed into Leith Harbor. Meanwhile, both sides were putting the finishing touches on their respective strategies for war and dispatching additional vessels to the area.

Both sides claimed sovereignty. In the late 18th century, both British and French settled on the Falkland Islands. Spain inherited the French claim, and Argentine in turn inherited the Spanish claim. For a short time in early 19th century, an Argentine governor had ruled the Falkland Islands, but Britain reasserted her claim in 1833. The Argentines invaded the Falklands on April 2. Britain formed a task force to retake the Falklands. British Rear Adm. Sandy Woodward was the overall commander of the expedition, and Maj. Gen. Jeremy Moore oversaw ground forces whose objective was to retake Port Stanley.

The British sought to nullify as much as possible the threat of the Argentine Navy and Air Force before they sent their elite ground troops ashore. Removing the Argentine naval threat was simple enough. After the HMS Conqueror sunk the Argentine light cruiser ARA General Belgrano on May 2, the Argentine fleet hunkered down in port. This removed the threat that Argentine surface ships armed with Exocet missiles posed to Woodward’s task force. The air threat was more problematic. The threat posed by air-launched Exocet missiles fired by Argentine attack aircraft at high altitude was formidable; only two British Type 22 frigates equipped with medium-altitude Sea Wolf missiles could confidently counter that threat. During the course of the six-week war, the Argentines sunk or heavily damaged six British warships. But the British pressed forward, landing on East Falkland Island on May 21. In less than a month, they captured Port Stanley. Christopher Miskimon’s feature article in this issue covers the final battle in great detail.