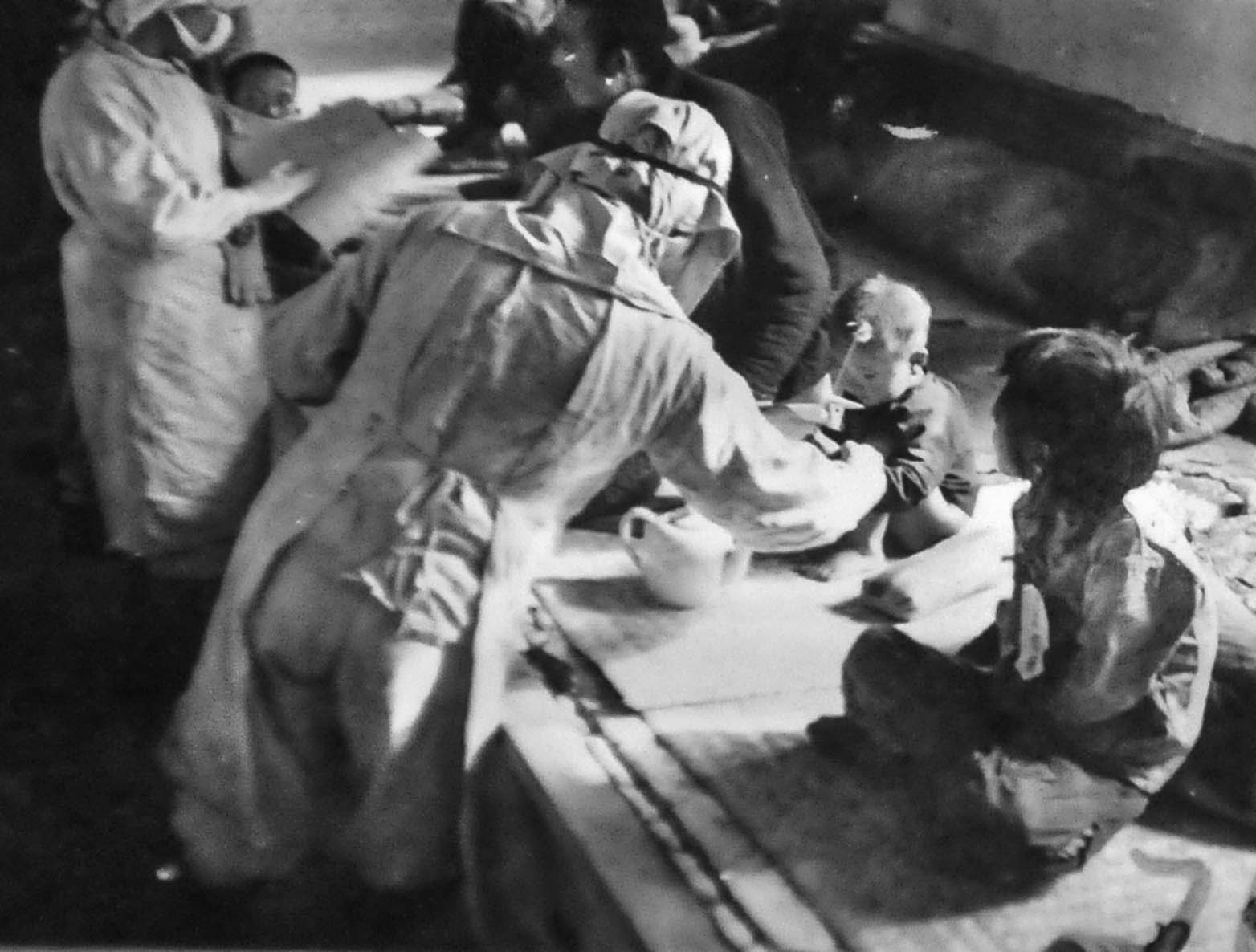 This article appears in: April 2020

Confronted with war, some men seem capable of assuming almost any evil. Such were the actions of General Shiro Ishii and the men of his Manchuko Unit 731, which developed means of biological warfare in the 1930s and ’40s. Ishii was the prime mover in the unit which grew to more than 20,000 during World War II. He was born in the small agricultural village of Kamo in Chiba Prefecture.

Ishii Seeks To Make His Mark In The Imperial Army

On June 25, 1892, it soon became evident he was talented—and arrogant. Shiro easily overshadowed his three older brothers in their academic training by memorizing whole tomes of work overnight. With his booming voice and measuring a full six feet in height, Shiro was a man clearly destined for greater things.

After graduating from the Medical Department of Kyoto Imperial University in December 1920, the 28-year-old Ishii was looking to make a name for himself as a medical doctor in the Japanese Imperial Army. Within a month of graduating, he began his military training as a probational officer in the Third Regiment of the Imperial Guard Division. His probation would end within five months and on April 9, 1921, he received his commission as Surgeon-First Lieutenant with orders to the Imperial Guard Division.

Almost immediately, he showed more interest in the research side of medicine, which got him transferred to the First Army Hospital in Tokyo in August 1922. Ishii’s skill at manipulating senior officers and his bullying and intimidating junior officers came easy to this brilliant and dynamic officer.

It was also at this time that he acquired a reputation as a playboy and a heavy drinker. His sexual interests were in young girls, not older than 15 or 16, whom he found in Tokyo’s red light district. By the 1930s, not only did his visits to the Tokyo geisha houses become more common; they also became legendary for the money he spent. How he came by his money is unknown.

In 1924 Ishii’s conduct came to the attention of his superior, who ordered him back to Kyoto Imperial University for advanced training. Ishii concentrated on bacteriology, serology, pathology, and preventive medicine. It was while he was doing this research, that he was sent to Japan’s Sikoku Island to study a new disease that had developed in the Kagawa district. Over a short period, the disease reached epidemic proportions. It claimed thousands of lives before being recognized and isolated as the Japanese B encephalitis.

Ishii worked hard to locate and isolate this disease by working on a number of water filtration systems, and his subsequent discovery would have far-reaching impact on his later career. After returning to Kyoto in triumph, Ishii became more brazen and bold. He quickly attached himself to many of his professors, including the Kyoto University president himself, Araki Torasabuto. Soon Ishii married Torasabuto’s daughter. He then was promoted to captain in 1924 and received his Doctorate in microbiology in 1927.

It was at this time that he began to raise a large family and fall into a routine expected of a rising professional officer. But this still didn’t keep him from his nightly visits to the local bars and geisha houses. In addition, he identified increasingly with the goals and aspirations of the ultranationalist officers in the Japanese Army. These junior and mid-level officers espoused anti-Western ideas while championing pro-National Socialist ones.

Employing his connections with this cadre of officers and his university connections, Ishii began a two-year tour of inspections and study overseas in 1928. To this day, it remains a mystery who his wealthy patrons were. But what is known is that upon his return to Japan in 1930, the Japanese High Command was much more amenable to biological warfare than in 1928.

Next Ishii lobbied the Army Medical College to establish a new department, the Department of Immunology, with himself as its chairman. His intention was to make this department the center for biological warfare research. His intense lobbying efforts finally paid off when his motion was approved by the Imperial Japanese Staff.

By August 1932, Ishii had built up enough clout to have himself and a friend posted to Manchuria for approximately a month in search of a site to conduct his human experiments. He found the perfect place in Bei-inho, a small, out-of-the-way village located about a hundred kilometers southeast of Harbin. Ishii had chosen his location well and, within a month’s time, Unit 731 was up and running.

In 1936, Unit 731 was reorganized and expanded into the Epidemic Prevention Department of the Kwantung Army (the Ishii Unit). A smaller section (the Nakamatsu Unit) that was concerned with combating animal diseases was set up with the approval of the Kwantung Army at Xinjing. In 1938, a special military zone was declared at Pingfan, 25 kilometers southeast of Harbin, and the local residents were all evicted. Construction of a huge facility for the production of biological weapons began. On August 1, 1936, the Ishii Unit was renamed the Epidemic Prevention and Water Purification Department of the Kwantung Army (a description the very opposite of its real aims), although after 1941 it was more commonly referred to as Manchukuo [Manchuria] Unit 731. Unit 731 was composed of four sections: Research, Experiments, Anti-Epidemic, and Water Purification and Production.

After Unit 731 was established at Pingfan, many faculty members of the military medical schools were sent to Manchuria and became involved in experimenting on humans for the development of biological weapons. In fact, Ishii had started recruiting young, elite medical specialists from various Japanese universities a few years before the establishment of Unit 761. Branch units were set up in Peking, Nanking, Guangdong, and Singapore; these units conducted experiments on weapons developed by Unit 731 and made plans for waging biological warfare within those regions. At this time, newly promoted Colonel Ishii had three thousand staff in Unit 731 and as many as 20,000 staff under his command if all members from the branch units were counted. These figures remained relatively constant until the final year or so of the war, when casualties on the fighting front led to a reduction in all support units’ strength.

How to Disperse Biological Weapons

Unit 731 developed various methods for dispersing biological weapons. One was to introduce toxins into the local water or food supply. Another was by a bomb specifically designed for dispersing pathogens from aircraft. In 1939, when Japanese and Russian forces clashed on the Mongolian-Manchurian border, Ishii’s unit used aircraft to drop typhoid-fever pathogen into nearby rivers. Other attempts by aircraft were made in 1940 and 1941 by contaminating cotton and rice husks with the black plague at Changde and Ningbo, in central China. About a hundred people died as a result but to the Japanese, the casualties at both places were insufficient. They then developed a bomb that enabled a more efficient dispersal from greater heights. It wasn’t widely used, however, because it was not perfected until close to the end of the war.

Unit 731 regarded fleas as the most useful vector for pathogens, especially the plague. It bred massive numbers of fleas and rats for producing the plague bacillus and tested whether fleas could survive being released from aircraft bombs. The unit also developed anthrax-bacillus bombs, which proved successful because the bacillus is heat resistant. Shrapnel from the bombs carrying the bacillus was highly efficient at infecting those hit by it. The anthrax bomb was tested many times on humans at Anta, 146 kilometers from Pingfan.

Humans Rounded Up For Experiments

It is well known that Unit 731 used large numbers of Chinese for experiments. Many who rebelled against the Japanese occupation were arrested and sent to Pingfan where they became guinea pigs for Unit 731. There is also ample evidence that some Russian and American POWs were also used. The prisoners subjected to experiments were called “maruta” (literally “logs”) by the Japanese. Every year, the dreaded Japanese Secret Service with the assistance of the Manchurian civilian police rounded up approximately six hundred maruta to send to Pingfan. When they were being experimented on, the maruta were transferred from the main prison to individual cells where they were infected with particular pathogens either by injections or by being given contaminated food or water. They would then be observed and their symptoms meticulously recorded. Blood and tissue samples were taken. After succumbing to the disease, the prisoners were usually dissected, and their bodies cremated within the compound.

Unit 731 also conducted frostbite experiments on the maruta. Frostbite was a severe problem for the Japanese forces in Manchuria, where the winters are extremely cold. Prisoners were tied up outdoors in temperatures as cold as -20 degrees Celsius and parts of their bodies were sprayed with salt water in order to induce frostbite. Their arms were then hit with hammers to determine how recovery from frostbite could best be facilitated. In extreme cases, the prisoners’ skin and muscles sloughed off in response to this treatment and the victims died immediately. As a result of the experiments, it was found that immersing frostbitten limbs in body-temperature water best facilitated recovery.

Medical scientists, on Ishii’s orders, drained the blood from POW’s bodies, replacing it with horse and monkey blood (in an effort to create “artificial” bloods). Japanese soldiers tied POWs to stakes and exploded germ bombs overhead, while timing their deaths with stopwatches. Medical examiners even dissected live POWs!

No abomination was indecent enough to halt the heightening fervor of experimentation. Prisoners-of-war and the surrounding population were deemed expendable by the Japanese who believed their loss wouldn’t be missed. The use of human guinea pigs was widely known within Japan’s medical community, but prompted no ethical outrage.

Ishii Goes Into Hiding After the War

When the war ended in August 1945, Ishii made arrangements to flee to Japan and to appoint Dr. Ryoichi Naito as liaison to the United States. He subsequently delivered a 12-page, handwritten, chain-of-command accounting of Operation BOEKI KYUSUIBU (Water Purification Unit) that admitted some of its practices and led directly to Japanese Emperor Hirohito.

As Pingfan was being dismantled and destroyed (so large was the production plant in the heyday of Unit 731, it had the potential for creating sufficient bacteria to kill the world’s population several times over), Ishii went into hiding with his specimens and research data.

Dr. Ryoichi Naito then contacted Lt. Col. Murray Sanders, a biological warfare specialist on the U.S. Scientific Intelligence Survey. Sanders recommended to Gen. Douglas MacArthur that, in exchange for their data, the Japanese researchers be granted full immunity from prosecution for war crimes.

Sanders wasn’t the lone voice for support. Other U.S. scientists supported his recommendation without regard to moral qualms or ethics. Some even suggested lying so as to prevent this information from falling into the wrong hands.

Meanwhile, China and the Soviet Union hounded the United States with requests to interrogate Ishii for war crimes. But on May 6, 1947, MacArthur sent this top secret cable to the U.S. War Department: “Experiments on humans were known. Confirmed by Ishii. If guaranteed immunity from war crimes, he can describe program in detail.”

Three months later, on August 1, a combined State, War, Navy, and Coordinating Committee for the Far East report stated: “The value to the U.S. of Japanese biological warfare data is of such importance to ‘national security’ as to far outweigh the value accruing for ‘war crimes’ prosecution.”

To consummate the “deal,” the United States paid the equivalent of 250,000 yen for the excavation of eight thousand slides of human tissues and 60 pages of reports that Ishii had buried in mountainsides and hidden in temples. Returning American POWs were ordered not to discuss their ordeal with anyone.

And what of Ishii? He was a welcome guest at Camp Detrick, Md., where he lectured U.S. scientists and military personnel on the results of his human experimentations. He died in Japan of throat cancer in 1956.