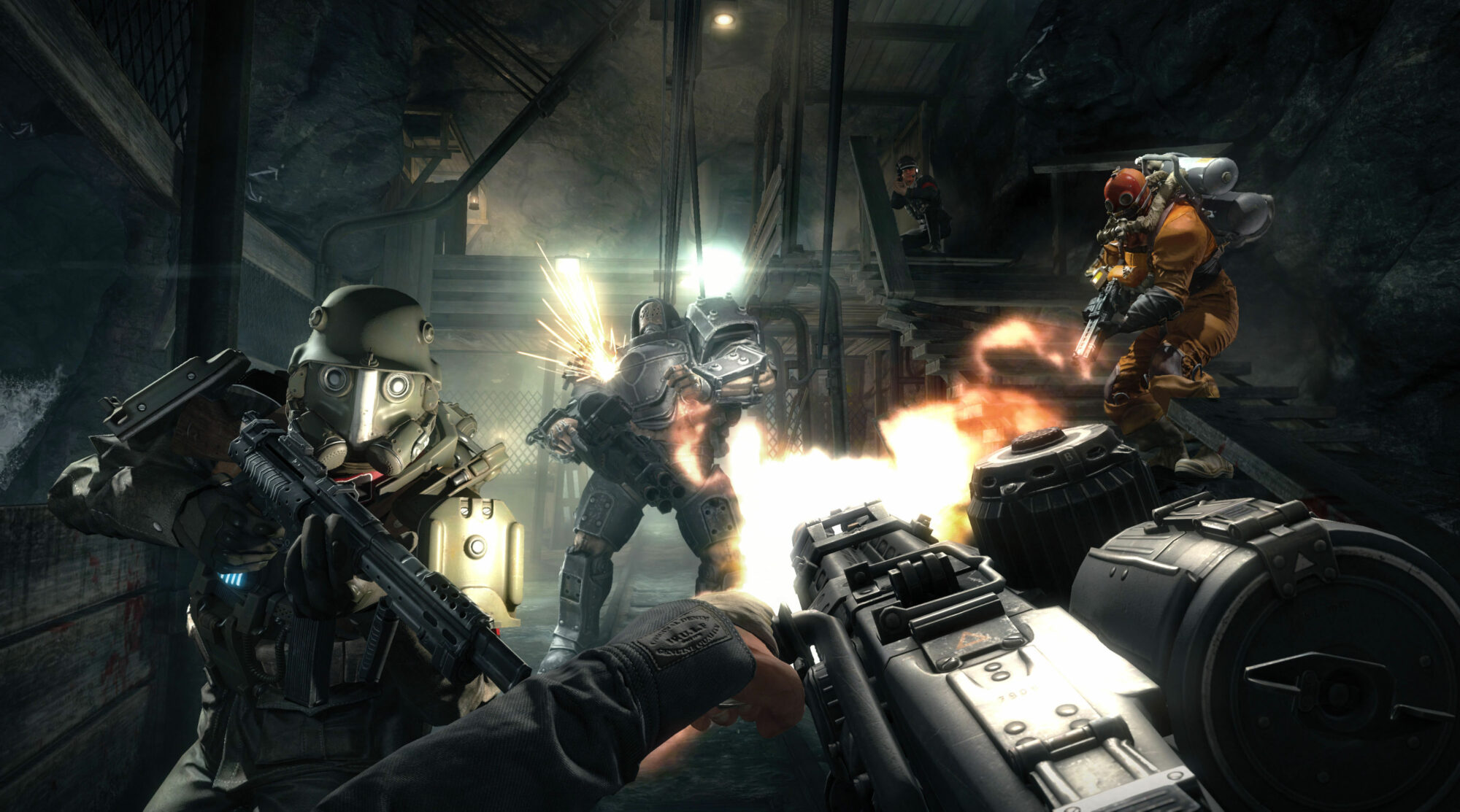 Game Features: A Closer Look at Wolfenstein: The Old Blood

MachineGames' stand-alone expansion Wolfenstein: The Old Blood offers gamers the perfect excuse to take on the Nazis once again.

This article appears in: August 2015

Expansions can be a tricky thing, especially when they come almost exactly one year after the main game. In the case of MachineGames and Bethesda Softworks’ Wolfenstein: The Old Blood, just about the perfect amount of time has passed to make all the Nazi-battling seem fresh again. While it doesn’t bring too much new to the table, The Old Blood delivers more of the same with an impressive amount of destruction for a relatively light cost of entry.

Wolfenstein: The Old Blood takes us back in time to 1946 … well, at least the 1946 of this alternate timeline. Before Captain William “B.J.” Blazkowicz took on the relentless forces of General Wilhelm “Deathshead” Strasse, he was tasked with an equally sensitive mission: Infiltrating Castle Wolfenstein. The castle itself is as foreboding as one could imagine. It looms menacingly on the horizon, and it’s just as tough to get into as it looks. Thus, B.J. is thrown right into a sneaky little mission that quickly escalates into massive firefights against juiced-up Nazi soldiers, attack dogs, booming mechanical monstrosities, and a small sampling of the four-legged foes we faced in The New Order.

Some Considerable Overlaps With The New Order

Anyone who just finished playing The New Order might want to hold off on The Old Blood for a while because there isn’t too much differentiating the two other than the scenario and a few new weapons. This isn’t a huge mark against it—this is an expansion after all, and a stand-alone one at that, so you don’t need your copy of the original game to dig in—but playing both back to back will no doubt cause some fatigue. The Old Blood sports that familiar mix of stealth and pure white-knuckle action, and it works amazingly well for the most part. Sneaking around has its advantages, but it doesn’t take much to turn a stealth mission into a desperate, shield-draining shootout.

It’s both immensely satisfying and occasionally frustrating in that regard. As much as I enjoyed The New Order, I eventually started groaning whenever I would enter an area in which officers were roaming, poised to shout out my location and sound the alarms to trigger wave after wave of bullet-spraying baddies. For those who haven’t played the original, the setup is pretty straightforward. You’ll walk into a location and radio signals will pop up on the screen, giving you a vague idea of how close you are to an officer. Alert anyone of your presence along the way and you’re pretty much screwed, so the idea is to sneak around, pop off some silenced shots, and kill the officers to snuff their ability to raise an alarm. 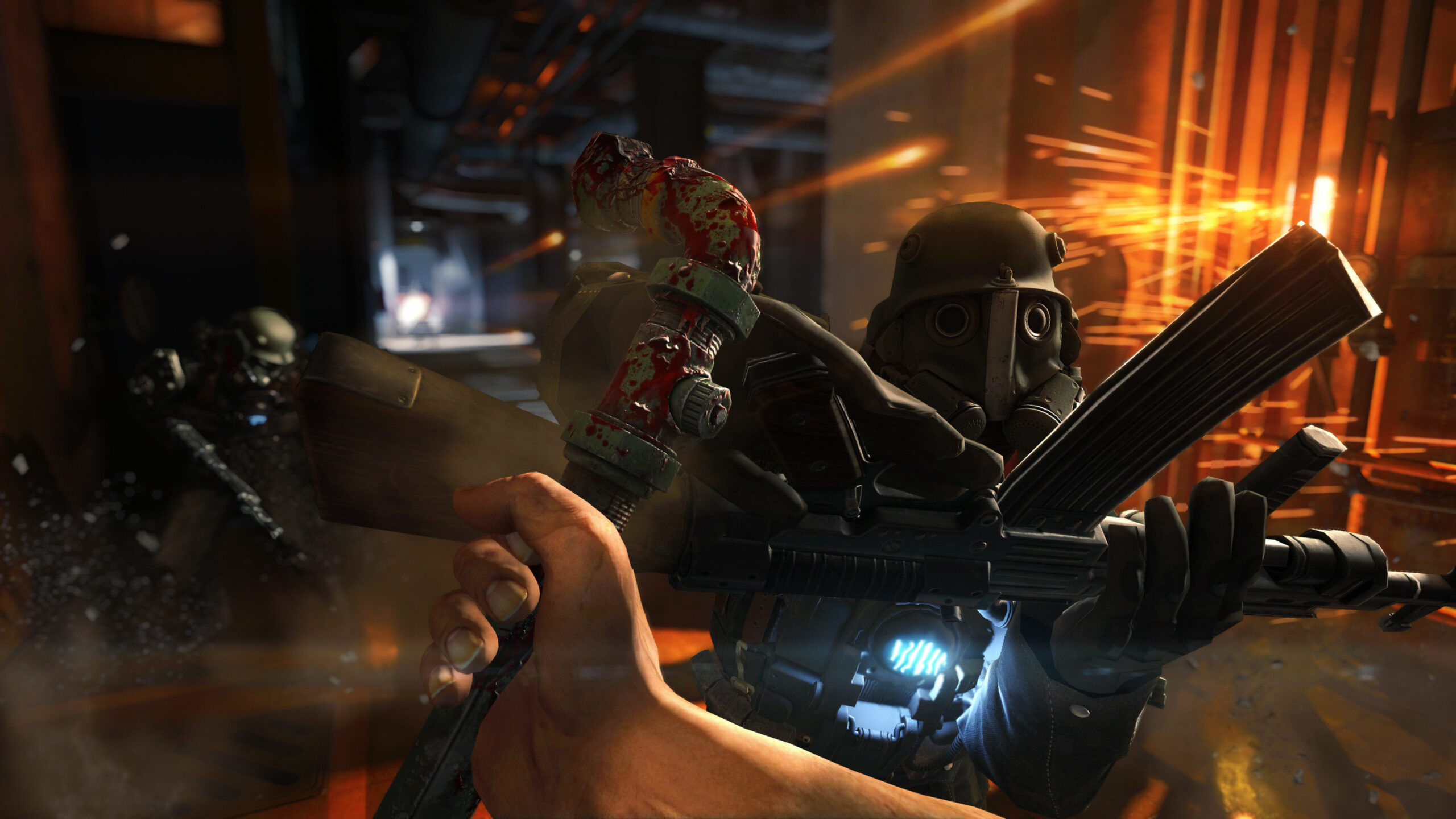 A Smorgasbord’s Worth of Item Drops

These sections are simple enough, and the majority of them won’t give players too much hassle. The few that do just bring on a cavalcade of foes to chip away at your health, which is rarely in dire straights thanks to the fact that the environment is absolutely littered with replenishing items. That’s another unfortunate aspect of the game. Not because it makes it too easy, but because I find myself unable to move on to the next area until I make sure every single shiny item that isn’t nailed down has been duly inspected. It doesn’t matter if Nazis are standing around riddling me with bullets, I WILL check to see whether or not that box of shotgun shells in the rubble is necessary.

As far as weapons and items go, one of the best additions is the pipe, which comes loaded with a handful of uses. Not only can B.J. whack the crap out of enemies with it, but it can also be used to hold doors open while you slide under, pry open vents, wrench the suits off of mechanized units, and, in true adventurer fashion, climb up cracked stone surfaces. There’s not much to the climbing, but it is fun to pop your head over the ledge and sneak off a few shots at any soldiers unlucky enough to be patrolling the area. 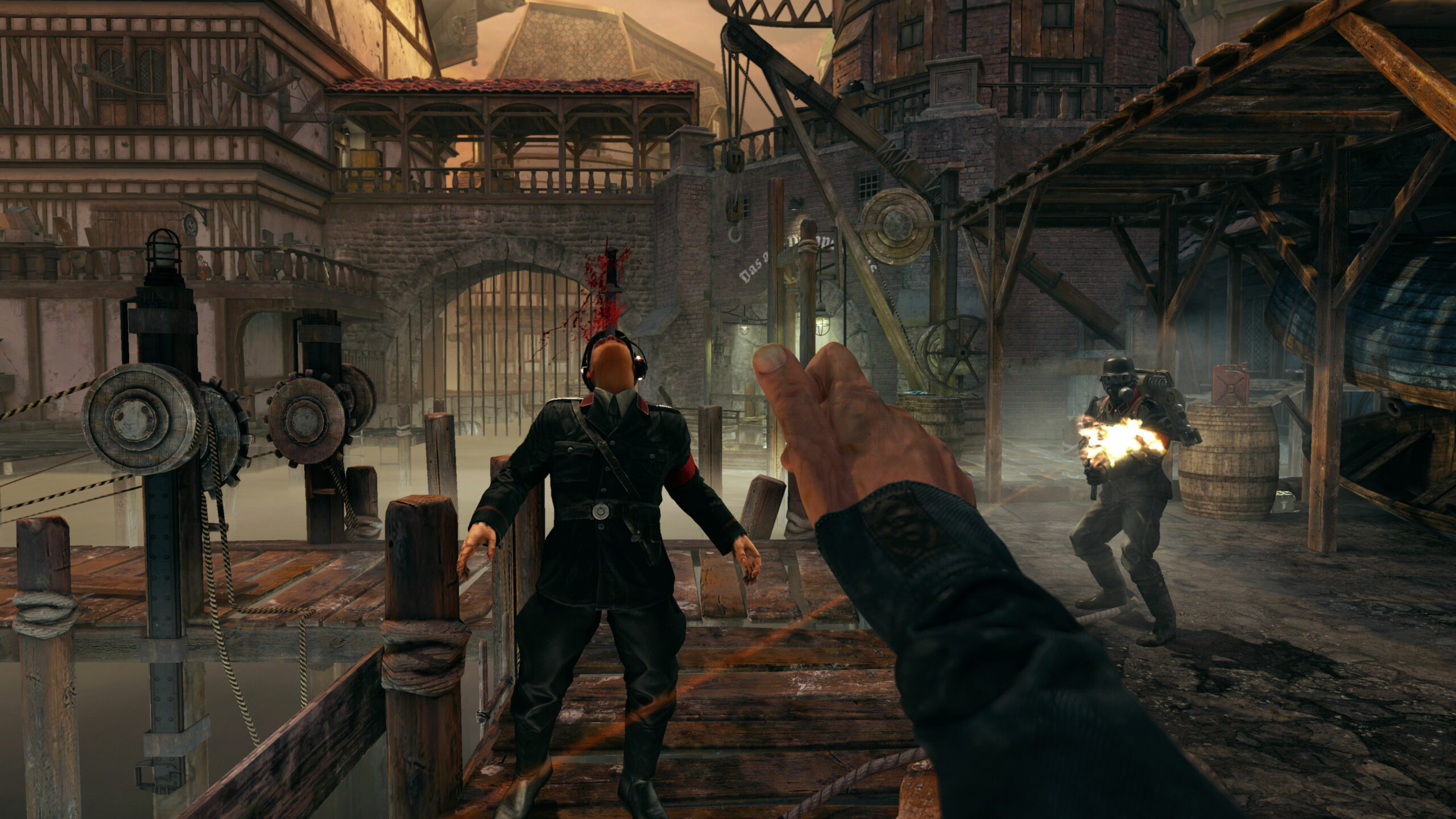 Big on Environment, Not So Much on Characters

The Old Blood starts out fairly rigid, and despite the fact that we’re in the infamous Castle Wolfenstein, the adventure is at its best once B.J. escapes. It’s not just that you’ll be executing enemies faster at this point, but the environments themselves are so much more interesting outside of the confines of those cold stone-and-steel hallways. They eventually give way to cable cars high in the sky, and then a small connected village that holds its own secrets, including the heart of a burgeoning resistance. There’s also a fantastic turning point that highlights the occult and horror aspects of the universe and switches things up just in the nick of time.

Connecting with the characters—both friendly and not—isn’t quite as engaging as it is in The New Order, and that is perhaps the greatest distinction between the two. The plot of the last adventure was both sprawling and tightly wound. It was immediate and urgent, but it knew exactly when to slow things down and let its characters, including our burly hero, shine. There’s very little of that here, and while it certainly keeps the pace fast and loose, it doesn’t have the same impact. Those who assist you along the way are merely vessels to get B.J. from point A to B and so on. They’ll let you in a locked door with the right password, outfit you with a few helpful items, and send you on to the next location. They might even meet some horrible fate in the process, but it doesn’t resonate all that deeply.

In that regard, The Old Blood isn’t going to end up as memorable as The New Order, but it’s still a fine little package on its own. If you pick it up without playing the full game you might wonder what all the fuss was about, but why on Earth would you do that? Play The New Order, take some time off, and come back for more in this action-packed, nearly-full-length addition. And yes, it has more of those classic Wolfenstein 3D-style Nightmare levels, along with a batch of hefty Challenge missions, so you can keep the dream alive and play Wolfenstein however you prefer it.