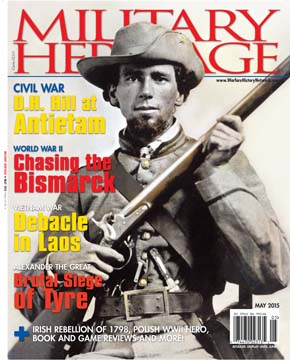 On April 21 1945, the Polish II Corps captured the Italian city of Bologna and from the city’s highest tower flew the flag of Poland. Although the war would continue, combat for this unit was over, and it went into the Allied reserve. Lt. Gen. Wladyslaw Anders led the corps before and during its service in Italy. He was not only an excellent commander with a keen sense of strategy and tactics, but also was a national hero to his fellow Poles, both soldiers and civilians, and did his best to look after their interests. But Anders’ role in the Italian campaign is only part of his story. His story stretches from the creation of the unit to his postwar efforts for Poland and her people.

This story was first published in the May 2015 edition of Military Heritage. Order your subscription here!

In the service of a reconstituted Poland, he rose to the rank of general during the Russo-Polish War of 1920. When Nazi Germany invaded Poland on September 1, 1939, Anders led the Novogrodek Cavalry Brigade into action near the Polish border with East Prussia. During the campaign he subsequently took command of two battered infantry divisions. When the Soviet Union invaded eastern Poland as part of the Soviet-German Pact, defeat of the badly outnumbered Polish Army was inevitable. Anders, who was wounded, led his brigade south to the relative safety of Hungary. Unfortunately, he was captured by Soviet troops on September 30.

Surviving a brutal captivity, Anders was a prisoner for two years. Like other Polish citizens, his imprisonment ended after the German invasion of the Soviet Union on June 22, 1941. Relations between the two countries became one of putting differences aside to fight a common foe. This led to a new arrangement that allowed for the creation of a Polish army on Soviet soil with Anders named as its commander. Much to the displeasure of Soviet leaders, he issued an order encouraging all Polish citizens to make their way to camps set up for them. Anders was under constant pressure from the Soviet regime to put Polish troops into battle immediately, but he resisted this demand. His stance was that his men would only be sent into combat after they had been properly trained and equipped.

The Polish military force continued to grow as more Poles arrived, and it became known as Anders’ Army. At the start of 1942, the Soviet Union made an agreement with Britain and the Polish government-in-exile for the transportation of the Polish troops to Iran where they would continue training. Anders knew from personal experience in dealing with the Soviets that no Polish citizen could be left behind. He therefore took sole responsibility for the decision to evacuate civilians alongside the soldiers. The majority of evacuees crossed the Caspian Sea from the port of Krasnowodsk, while others completed the journey by rail around the inland sea. Between the first phase of evacuations in late March 1942 and the second in August 1942, approximately 41,000 troops and 74,000 civilians made the journey. Anders’ fears were confirmed after the evacuations when Soviet leader Joseph Stalin decreed all persons on Soviet soil were Soviet citizens. Although the general did his best to save his countrymen, hundreds of thousands of Poles did not make it and were condemned to forced labor or compelled to serve in the Red Army.

During 1944 and early 1945, U.S. President Franklin D. Roosevelt, British Prime Minister Winston Churchill, and Soviet Premier Joseph Stalin met several times to determine the future of postwar Germany and the countries liberated from occupation. Early in 1945 the so-called Polish question was finally resolved. Poland would be forced to cede her eastern territories to the Soviet Union, but it would be compensated with German land. The Soviets used various measures—such as not helping the Poles during the Warsaw Uprising in August 1944—to ensure that Poland’s new government was pro-Moscow.

Throughout the war, Anders had demonstrated his capabilities as a tactician to achieve victory for the Allies. But the time had arrived to focus on the best interests of his men. On February 15, 1945, he met with British 8th Army Commander Lt. Gen. Richard McCreery to discuss a letter Anders wrote stating that the final decision regarding Poland was a “great injustice.” He requested that the Polish II Corps be relieved from frontline duty because he could not ask his men to sacrifice themselves any further. McCreery appealed to Anders, stating that he had no reserves to fill such a major gap. If the Poles withdrew, the consequences could be disastrous. In the end, Anders realized that McCreery was right. Not only would the British 8th Army be left in a potentially hazardous position, but a Polish refusal to go into battle would supply the Soviet Union and the pro-communist Poles with propaganda material.

On May 8, 1945, Germany unconditionally surrendered and the war in Europe was over. The Polish II Corps suffered 2,301 killed, 8,543 wounded, and 535 missing, and the Polish soldiers were left homeless. Although the Soviet-backed government in Warsaw offered to repatriate the soldiers in the winter of 1945, most of them chose to remain where they were stationed for the time being.

In July 1945 the Allied leaders met in Potsdam, East Germany. One result of the meeting was that the British government would no longer recognize the Polish government-in-exile; however, Polish units would still remain on duty. Deployed in the Marche region of central Italy along the Adriatic, the soldiers of the Polish II Corps were joined by their families and refugees. Anders continued to accept recruits, and by May 1946 the corps totaled between 103,000 and 112,000, which was twice the number of soldiers Anders had led into Italy. A Polish government opposed to communist rule was formed in London. Anders flew between Italy and London to defend the interests of all Poles.

In the spring of 1946, the British government transferred the Polish II Corps to England for demobilization and education to help the men make a successful transition from military to civilian life. The last of the corps left Italy on October 31 when Anders himself departed the country for the final time. Events in Poland confirmed that those who supported the Polish government-in-exile would not be welcomed back home. Some of exiles had their Polish citizenship and military rank stripped. Actively supportive of the government-in-exile, Anders’ rank as a lieutenant general was still recognized, and he served as inspector general of the Polish forces in exile. He covered his personal experiences during the war in An Army in Exile, published in 1949.

On May 12, 1970, at the age of 77, Wladyslaw Anders died in London. After a service in London where former soldiers and exiled Poles paid tribute, he was buried alongside his fallen soldiers in Italy at the Polish Military Cemetery at Monte Cassino per his request. Labeled as a villain by the communist regime in Poland for decades, his accomplishments were treated as nonexistent. That changed in 1989 when the communist regime was toppled. Later that same year, the democratically elected government of Poland posthumously reinstated his citizenship and military rank and honored his service to the country.

Anders proved to be an excellent military leader whose talents as a strategist probably kept casualty figures for the Polish II Corps lower than they might have been. The general was also a humanitarian who helped save tens of thousands of lives from certain death in the Soviet Union and despaired when he could not save more. In addition to being a great soldier, Anders always had the best interests of Poland and her people in his heart.