John Pope used geography, intelligence, engineering, and sweat—with a big dose of courage from the Carondelet—to crack the nut of Island No. 10
Carl Gnam
No comments
Categories: Civil War

With its whistle blaring, the Confederate gunboat Grampus steamed into Madrid Bend, where Missouri, Kentucky, Tennessee, and Arkansas come together on the Mississippi River. Within days the reason for this excitement became evident as six ugly ironclad gunboats anchored a few miles upriver near Island No. 8. The Union Navy’s long anticipated attack down the river had begun.
[text_ad]

The Confederacy’s highwater mark on the Mississippi came at Columbus, Ky. On September 4, 1861, Gen. Leonidas Polk violated the Bluegrass State’s self-proclaimed neutrality by seizing the heights at Columbus and—farther downstream—Hickman on Kentucky soil just north of the Tennessee border. That tactical success was followed by an immediate strategic defeat as Brig. Gen. Ulysses S. Grant seized Paducah and Smithland, at the mouths of the Tennessee and Cumberland Rivers, advancing the Union front line from the Ohio River to the Tennessee border.

Still, the proximity of Confederate forces at Columbus to the large Union depot at Cairo, Ill., was a constant worry to Union commanders, forcing them to maintain a large garrison there. On January 20, 1862, Maj. Gen. Henry Halleck, commander of the Military Department of Missouri, suggested to his superior, Maj. Gen. George McClellan, that he attack New Madrid, 30 miles downriver from Columbus. Such a move would trap the Confederate garrison, relieve the pressure on Cairo, and allow Halleck to use the Cairo garrison’s troops elsewhere.

In 1811, a massive earthquake centered at New Madrid altered the geography of the area, giving the area unique terrain characteristics that would make it a logical defensive position. At Madrid Bend, the Mississippi River twisted back and forth in a pair of serpentine curves. In the first bend was Island No. 10, so named because it was the tenth island south of where the Ohio flows into the Mississippi. The town of New Madrid was in the second bend. Island No. 10 and its environs onshore would be a natural stronghold and barrier to Union shipping from the north. 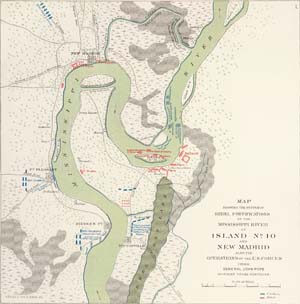 The Anchor of the Confederate Right

Reelfoot Lake in Tennessee anchored the Confederate right; a swamp between it and the river made it impossible for any force to advance from that direction. The Great Mingo Swamp in Missouri formed a 30-mile-wide barrier north of New Madrid. At Madrid Bend, the western peninsula made by the two river bends and jutting up from Tennessee toward New Madrid, was another swamp that protected the Confederate left in Tennessee. Moreover, heavy rains during late winter flooded the Mississippi. The water in the swamps was several feet higher than normal, making them even more difficult to pass through.

When the Confederates eventually abandoned Columbus in late February, the position being made untenable by Grant’s moves deep into Tennessee, they brought many guns that added to the area’s natural defenses. Eventually, 45 cannons were in batteries on the Tennessee shore, on Island No. 10, and in forts protecting New Madrid. To force enemy boats to steam close to the island, they sank the steamer Winchester in a channel opposite.

Another part of the Confederate defenses at Island No. 10 was a unique weapon of the war, the floating battery New Orleans. Originally the Pelican dry dock in Algiers (on the Mississippi opposite New Orleans), the floating battery resembled an immobile boat with cannon on both sides. When it arrived at Island No. 10, the Confederates removed the cannon from the starboard side and anchored it on the upriver end of the island with the port guns pointed north. To protect New Madrid, the Confederates erected a pair of forts on either side—Fort Bankhead upriver, and Fort Thompson downriver from the town.

The Confederates believed the Union attack on New Orleans would come from the north, where they had heard about construction of the Union ironclads. Commanding the Confederate naval force at New Orleans was Commodore George Hollins. When Union ironclads began operating on the western rivers, Richmond ordered Hollins to take most of his fleet north to help defend the Mississippi.

The Fatal Flaw in Confederate Defenses 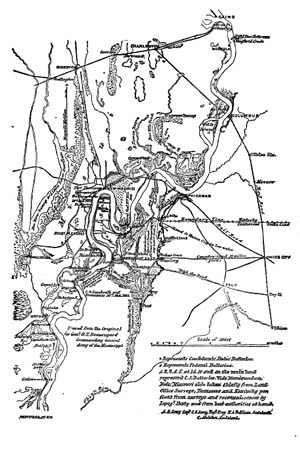 Thus, the Confederates had a number of boats at Madrid Bend, but they were gunboats in name alone. In reality, they were nothing more than steamers with cannon mounted on them. The most heavily armed was the McRae with eight guns. The ships were unarmored except for the Maurapas, which had iron plating over its engines. The fatal flaw in the Confederate defenses was that they were all geared toward a naval attack coming downriver.

At this time, the Union’s Western Flotilla was under army command. Though Halleck could order Flag Officer Andrew Foote to support any operation he wished, he had committed the gunboats to helping Grant reduce Fort Henry and Fort Donelson on the Tennessee and Cumberland Rivers. To attack Island No. 10 and New Madrid, Halleck had only infantry.

By mid-February, McClellan had given Halleck permission to begin the operation. Halleck chose Brig. Gen. John Pope to command. Pope was at Jefferson City, Mo., on February 14 when he received Halleck’s orders. He immediately traveled to St. Louis to meet with Halleck, who promised him all the support he needed. From there he went to Cairo and established his headquarters.

While there, Pope heard rumors that the Confederates were about to attack Cairo from Columbus. Halleck ordered Pope to remain in Cairo as long as there was the risk of a Confederate assault.

Moving His Headquarters Up the Mississippi

By February 21, Pope, deciding the Southerners were not going over to the offensive, moved his headquarters 30 miles up the Mississippi to Commerce, Mo. This put the Union Army on the same side of the Mississippi as New Madrid, at the end of an old corduroy road that ran through the swamp.

The force Pope commanded could hardly be called an army. His original force was the 140 men of his personal escort. The units assigned to him were green and untrained, many not receiving their arms until they were about to cross the river. In three days he was able to report to Halleck: “There are now here nine regiments of infantry, one battery Eleventh Ohio, and six companies of the First U.S. Infantry, about 6,500 men.” Within days he had 10,000 men.

“The Union Army at New Madrid”

With the arrival of Brigadier Generals David Stanley, Schuyler Hamilton, John Palmer, and Gordon Granger, Pope organized his force into four divisions. A week after his arrival, Pope was ready to move south at the head of the force that would later be named the “Army of the Mississippi,” but at that time was simply referred to as “the Union Army at New Madrid.”

On the last day of February 1862, two weeks after Grant took Fort Donelson, Pope set out for New Madrid, 30 miles south. As if Pope did not have enough problems, it began to snow, and measles struck the army.