The Hawker Typhoon 1A & 1B: Worst RAF Fighters in WWII?

Despite its high production numbers, the Hawker Typhoon 1A and 1B were both plagued by a series of design and technical problems.
2 Comments
Categories: WWII

In 1934 the British War office accepted a new aircraft design eventually designated the Hawker Hurricane Mark 1. It was England’s first monoplane single seat fighter and was armed with eight .303 caliber machine guns, and flew in excess of 300 mph. It entered service with the Royal Air Force in December 1937. However, even before the Hurricane joined the British air service, its replacement—the Hawker Typhoon—was on the drawing board.

In March 1938 the British Air Ministry advised Hawker Aircraft Company Limited, the manufacturer of the new cantilever low wing monoplane design, that the Hawker Typhoon had to be able to achieve a speed of at least 400 mph at an altitude of 20,000 feet, mount twelve Browning Machine guns, and be able to carry a combination of weaponry. The aircraft was to use the 2,000 hp Napier Sabre or Rolls-Royce engines. At 31 feet 11 inches long, 15 feet 3 inches high, with a wing span of 41 feet 7 inches, the Typhoon’s construction was a mix of bolted and welded duralumin, or steel tubes, and flush-riveted, semi-monocoque material. The wings possessed great strength, providing plenty of room for fuel tanks and heavy armament allowing the plane to be a steady weapons platform.

Intended as a high and medium altitude interceptor, the Hawker Typhoon’s development was held back in 1937 by the delay in the manufacture of the two proposed engines it was slated to employ. When one of these power plants, the 2,000 hp type 24-cylinder liquid-cooled inline Sabre I was finally available, it was soon discovered this model was difficult to start (especially in cold weather), engine sleeve jams caused the cylinder to explode, and it could emit dangerous amounts of carbon monoxide into the cockpit. The result was that the first production Typhoons—all 110 of them known as Typhoon 1A (the prototype had been first flown on February 24, 1940)—were continuously plagued with technical problems besides the unreliable Sabre engine: mid-air structural failures of the joints between the forward and rear fuselage, and tail breakaways caused by engine jamming or violent tail vibration. Flight testing continued into mid-1941 with a new prototype, the Typhoon 1B, and despite its recurring problems, 1,000 units were ordered by the government.

Frantic to counter the growing aerial ascendency of the new German Focke-Wulf Fw 190 fighter, British Fighter Command rushed 150 Hawker Typhoons in to service during the summer of 1941, with devastating results for the still teething aircraft. Pilots could not see behind them due to the armor plating, the planes had a nasty habit of losing their tails in flight, and it still had a poor climb rate; the aircraft was still did not make for a worthy air opponent. Although it had been designed as an all-altitude interceptor, its clashes with the Luftwaffe over the English Channel in mid-1941 proved it was inadequate for that role except at low level. Discussion within the RAF turned to making the Typhoon a night fighter, but that idea quickly went by the wayside; the planes’ exhausts were in the pilot’s line-of-sight.

Continued Problems With the Typhoon 1B

Throughout 1941 and early 1943, the RAF conducted tests on the at the Aeroplane and Armament Experimental Establishment. Problems persisted with the model until 1943 and were not rectified until late in that year. However, following bomb load tests, the plane was cleared to carry two 500 pound bombs. In addition, the Mark 1B was fitted with the more reliable 2,180 hp Sabre IIA engine which gave the fully loaded (13,250 pounds) bird a speed of 412 mph, with a ceiling of 35,200 feet, and a range of 980 miles. Speed-wise, it gave the ground attack Spitfire Mark XIV with its 448 mph a run for its money. Most importantly, its speed outstripped the Messerschmitt Bf 109 and the Focke-Wulf 190, whose models could travel by 1943 at rates of 406 and 382 mph, respectively.

As the Hawker Typhoon continued in service, so too did its mechanical problems. Oil coolers failed, so engines cut out upon landing, and tails snapped off either when the aircraft descended from high altitudes, or when it landed at speed knocking the pilot unconscious. During the first nine months of its operational service, more pilots lost their lives due to engine and structural failure than to enemy action. It was during this time (the second half of 1942) that the decision was made to use the plane not as an interceptor, but a fighter-bomber. Its new role started in August 1942 with strikes on enemy coastal targets in Northern France.

On October 25, 1943, now armed with powerful 4 20mm cannons, plus 8 60-pound High Explosive Rockets, Hawker Typhoons made their first rocket attack when they struck targets near the French city of Caen. The mission, not a great success, resulted in three Typhoons lost. All told, during 1943 low-level attacks resulted in the loss of 380 Typhoons in exchange for the downing of 103 German aircraft including 52 Focke-Wulf 190s.

Hawker Typhoons During the D-Day Invasion

To support the D-Day invasion the Royal Air Force formed the 2nd Tactical Air Force, which among other aircraft contained 18 squadrons of Hawker Typhoons. During the first five days of June 1944, the Typhoons put out of action all but one of the coastal radar installations on the Normandy coast. On D-Day itself, June 6, 1944, the nearest German armored formation to the invasion beaches—the 21st Panzer Division—was attacked continuously by Typhoons, suffering 26 destroyed or abandoned tanks. As a result, only six panzers and a handful of infantry made it near enough the coast to menace the Allied landings. Once the beachhead was secured, the Typhoon units were tasked with providing close air support to the British 2nd Army. While performing this job, Typhoons, in conjunction with Mitchel Light Bombers, obliterated the command center of Panzergruppe West, the headquarters which controlled all the German armored forces in Normandy.

In early July, Typhoons were diverted to attack Adolf Hitler’s V-1 and V-2 facilities. That same month they pounced on Field Marshal Erwin Rommel’s staff car as he was driving along an open road, seriously injuring the general. During the German Mortain Counterattack, and the Allied air attack on the Germans in the Falaise Pocket, Typhoons, while not directly destroying a large number of Wehrmacht tanks and other armored fighting conveyances, instilled so much fear in their crews that they panicked and abandoned their vehicles. During the four-month Normandy Campaign, 151 Typhoon pilots were killed, 36 were captured and 274 planes were lost to enemy action, mostly to ground fire. (Learn more about the Normandy Campaign and all wartime events—both momentous and obscure—by subscribing to WWII History magazine.)

During the four years the Hawker Typhoon was in service, 670 pilots of its 23 squadrons were lost. By war’s end, 3,317 Hawker Typhoons had been built. In September 1945 the Hawker Tempest, which had gone in to service in April 1944, had replaced the Typhoon 1B. Unlike many other aircraft, all the Typhoons were scraped and not sold off; implying the RAF did not want to pass the Typhoon’s many shortcomings onto others. 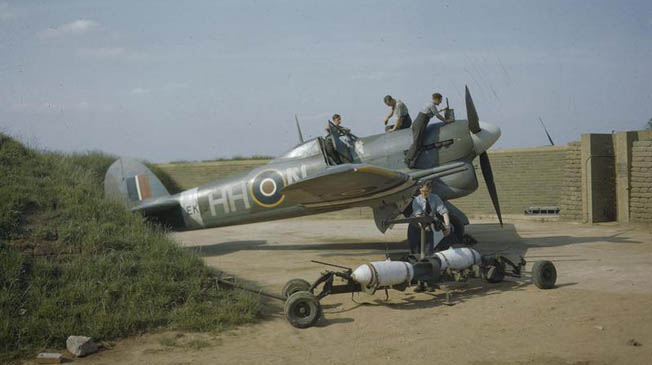