Today, the town of Verdun and the surrounding battlefield are still heavy with the awful weight of World War I and of history itself.

From a distance, the bush- and tree- covered hills seem innocuous, even welcoming. But as you drive upwards and peer through the leafy undergrowth, you began to perceive that there is something wrong, even sinister, about this place. The ground is warped and rippled by innumerable shell holes. And you are entering one of the most sacred areas of France—the Verdun battlefield.;

The battlefield itself is huge and you could easily spend a week exploring it; indeed,a car is necessary to reach its fascinating and far-flung sites. You may want to start your tour with the Mémorial de Verdun museum. Located at the site of Fleury, one of the nine villages that were wiped off the face of the earth during the battle, this is a grim and excellent exhibition of the weapons, machines, and uniforms used during the titanic struggle. Dominating the center of the museum is a chillingly realistic reproduction of a section of the battlefield, including superb reproductions of a German Fokker E.III and a French Nieuport 11 flying overhead.

Graves mark the entire area, but the most impressive one on the battlefield—indeed one of the most impressive graveyards in all Europe—is the giant Ossuary, located near the ruins of Fort Douaumont. Somber and dreadfully magnificent, this beautiful art deco building holds the remains of 130,000 French and German soldiers who lost their lives among the surrounding hills, fields, and forests. Many of these bones are visible through viewing windows cut into the building. Outside, in white well-kept rows, lie an additional 15,000 French soldiers. The effect is profound.

The Tranchée des baionettes, or Bayonet Trench, is equally moving and disturbing. Lying underneath a massive memorial are the rifles and bayonets of two battalions of the French 137th Infantry Regiment, buried alive on June 23, 1916 during an artillery bombardment. Although most of the bayonets have been stolen by souvenir hunters, this is still a place seeped in horror and memory.

A Profound Place of Reflection

Forts Vaux and Douaumont provide center points to the present battlefield, just as they were focal points of the fight in 1916. Climb onto their earthen roofs to get an expansive view of the entire battleground, and to see the points from which the Germans launched their opening attacks across the Meuse River. 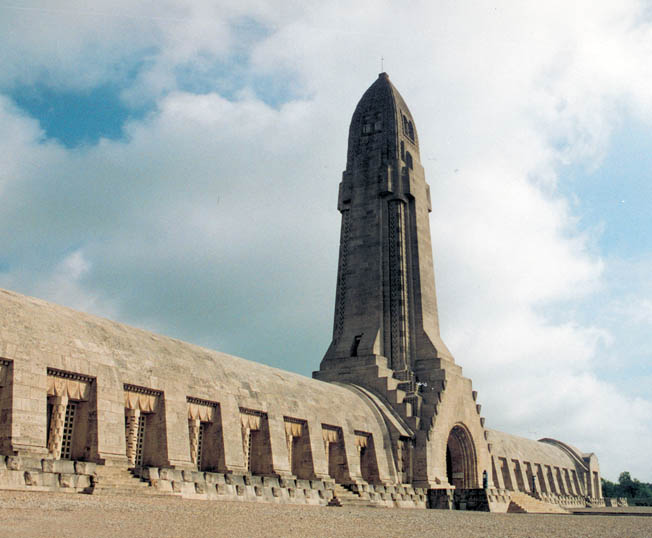 On top of these squat and solid structures are the battered steel cupolas from which the French poured out fire from machines guns or 75mm canon; if you kick the whitish ground during the dry season, you will see that it is tinted orange with the rust of rotted equipment, barbed wire, and weaponry, and you may even find contorted chunks of shrapnel and wire in the fine, pulverized earth. Inside, both forts can be explored by a self-guided tour. They are damp, cool, moldy places, which adds to the eerie effect.

But by no means should you limit your visit to the major sites of the battle. Wander around the entire grounds where modern French families often come to picnic. You can discover bunkers, isolated graves, gigantic mine craters, lonely markers where villages once stood, and any number of murderous hills and valleys where hundreds of thousands of men fought and died. The rebuilt town of Verdun itself is also well worth a visit. The tourism office is excellent and there are impressive monuments, memorials, and graveyards as well as a museum.

Although a tourist attraction now, the town of Verdun and the surrounding battlefield are heavy with the awful weight of World War I and of history itself. These are not light and joyful places to visit. People come here to reflect and to try to understand the enormity of what occurred here. The suffering and sacrifice, the killing and death that this area has seen lie in the very air itself, and with force and profundity bring back the war for modern generations in all of its terrible destructive fury.