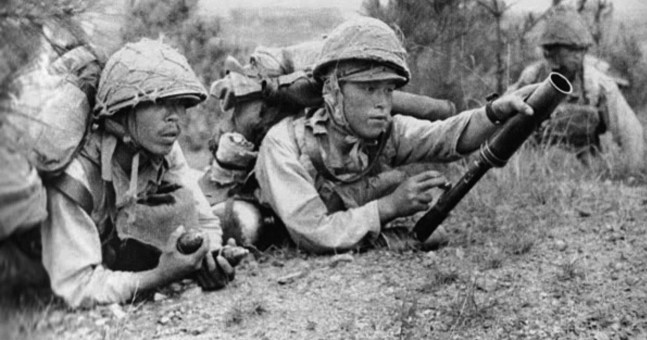 What Made the Dreaded Type 89 Knee Mortar So Damaging

Actually misnamed, this Japanese light infantry weapon earned the respect of the American soldiers who encountered it.

When it came to weapons production, the Imperial Japanese Army’s requirements often came in second to the needs of the Imperial Japanese Navy. The Army was an infantry-heavy organization that lacked much in the way of the modern heavy weaponry other armies enjoyed. Their antitank capabilities were extremely limited; artillery was often lacking and sometimes restricted to small, outmoded pieces; and its armored forces included obsolescent tanks that were greatly inferior to their opponents’ armor.

To help compensate for the lack of heavy weapons, the Imperial Japanese Army worked hard to develop large numbers of what were probably the best light infantrymen in the world at the time. Their creed stressed relentless offensive action seeking a quick decision and emphasizing spiritual factors including zealous dedication and fighting spirit. Night attacks were a true specialty, and their weaponry reflected their light and fast doctrine.

To offset their frequent lack of artillery, the Japanese augmented their firepower through the extensive use of mortars, the best and most cost-effective substitute for industry-intensive heavier artillery. And few were as feared, or as effective, as the Type 89 “Knee Mortar,” or grenade discharger.

The Origin of the Name

Technically, Japanese light “knee” mortars at first merely bridged the gap between hand grenades and true mortars and were more properly referred to as grenade dischargers. The weapon first developed was adopted in 1921, a 50mm grenade discharger, and it was an almost painfully simple smoothbore muzzleloader. Although it could fire signal and smoke rounds, this discharger was primarily used with the infantry’s standard 19-ounce Type 91 hand grenade, which could be lobbed to only about 75 yards maximum range. This discharger was known as the Model 10.

Japanese weapons used a year-based nomenclature that was often quite confusing to Westerners and requires some explanation. Initially, weapon model numbers were based on the year of the reign of the various emperors. For instance, the 6.5mm light machine gun was adopted in 1922, the 11th year of the Emperor Taisho era; thus it became the Model 11.

The Most Prolific of Grenade Dischargers

The Model 89 was by far the most prolific of the grenade dischargers and the weapon most commonly encountered by Allied Marines and soldiers throughout the various theaters of the Pacific War. Technically known as the Hachikyu Shiki Jutekidanto, or 89 Model Heavy Grenade Discharger, the new weapon featured a wide variety of improvements over the old Type 10 and had almost universally replaced the former weapon by 1941. To the frontline Japanese infantryman, the Type 89 was most often referred to as the Juteki. 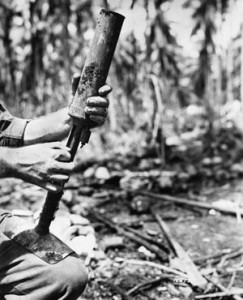 Still a relatively simple weapon, the Type 89 consisted of a steel pipelike barrel with enough rifling to spin stabilize the new projectiles, a trigger housing, a range-adjusting assembly, and a small curved base plate. Designed to be braced against a log, tree trunk, or the ground, this odd-shaped base plate helped give the Type 89 its deceptive nickname.

For whatever reason, Allied soldiers dubbed the weapon the “knee mortar” and some even tried to fire the Type 89 with the base plate braced against the thigh. The 1943 U.S. Army manual on Japanese weapons reported that a Marine on Guadalcanal attempted to fire a knee mortar in such a fashion and the recoil had broken his thigh bone.

Although it had a barrel length of only 10 inches and was just two feet long overall, the Type 89 still weighed a rather hefty 10 and a quarter pounds. Although the Type 89 was fully capable of firing the Type 91 infantry hand grenade used in the Type 10 grenade discharger, it was designed for the new 1-pound, 12-ounce Type 89 50mm high-explosive shell. Smoke, incendiary, practice and flare projectiles were also available.

This new Type 89 shell engaged the mortar barrel’s rifling for increased stability and accuracy and boasted a greatly improved maximum range of 770 yards. The shell consisted of a point detonating fuse, a grenade body filled with about one-third of a pound of high explosive, and a propellant assembly that screwed onto the bottom of the grenade body prior to firing.

To fire, the gunner removed the fuse’s safety pin and dropped the bomb tail first down the muzzle of the knee mortar. A pull on the leather lanyard attached to the trigger then fired the weapon. The firing pin struck a percussion cap primer that fired the propelling charge, which also caused a copper driving band on the charge body to push out and engage the rifling of the barrel. The force of discharge also set back and armed the fuse in the nose projectile and recocked the mainspring inside the mortar.

The weapons were almost always fired at 45 degrees elevation. Sighting capability, as such, consisted of only a line marked on the barrel itself, although some models captured by the Americans on Attu Island in the Aleutians also featured a small bubble level.

Adjusted by a knob connected to a worm screw on the bottom of the barrel, the firing pin assembly could be moved up or down to increase or decrease range. Graduated range scales for the two main types of projectiles were etched onto the stem of the tube that housed the trigger assembly. The Type 89 shell could be adjusted to ranges of 393 to 2,132 feet. This method of adjustment allowed the mortar man to change range while still holding the weapon in place to fire through small overhead holes in the jungle canopy.

Why the Knee Mortar Was So Effective

Despite these relatively crude controls, a soldier could quickly and easily be trained to fire the Type 89 knee mortar with impressive accuracy. While it could be fired by one man, a knee mortar with a three-man crew could maintain an effective rate of fire of 25 rounds per minute. 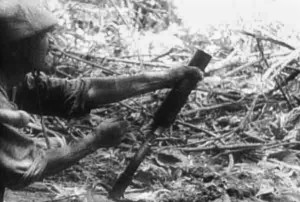 Being triggered rather than drop fired, the knee mortar could also be braced against a tree trunk and fired almost horizontally. It was often used in such a way to shoot through the firing slits of bunkers. Some theorize that using the Type 89 in this fashion with a dedicated antitank round could have proven to be an effective tank killer, but there is no reason to believe it would have been any more effective or ineffective than the similar caliber rifle grenades fielded by various armies in World War II.

The fragmentation rounds did their work well enough. Postwar U.S. Army medical studies concluded that approximately half of all Allied battle casualties were caused by mortars, and of those roughly 80 percent came from knee mortars. Technically, the Type 89 shells had too much explosive and not enough metal, producing a lesser amount of relatively small shrapnel much more likely to wound than kill. This was not any consolation to men hit by these flying shards of steel.

Probably the main reason for the knee mortar’s reputation for deadly effectiveness among Allied soldiers resulted from the sheer numbers of the weapon employed in the field. Every Japanese rifle platoon consisted of three squads of riflemen and a fourth grenade discharger squad fielding three or four knee mortars. A single Japanese rifle company could field as many as 12 grenade dischargers. Conversely, the standard American infantry rifle company had only three 60mm mortars in a separate weapons platoon.

5 Reasons the Type 89 Knee Mortar Was So Successful

Allied soldiers who met the knee mortar in combat were universally impressed by it and hated being on the receiving end of it. In the aftermath of the Battle of Guadalcanal, Lt. Col. Merritt “Red Mike” Edson, leader of the famous Marine Raiders, critically evaluated the knee mortar and insisted American forces badly needed an equivalent. He listed the following reasons:

A Marine Corps legend, then-Lt. Col. Lewis M. “Chesty” Puller seconded Edson’s opinion. “I consider it imperative that the Army and Marines be equipped with knee mortars and only carry one type grenade.”

Army Sergeant C.W. Arrowood completely agreed: “The Jap knee mortar gives us hell. They come in fast, thick, and accurate. Can’t we have one?” 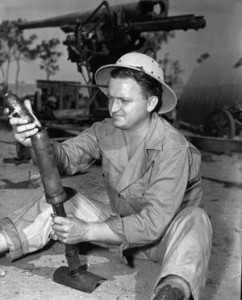 The answer to Sergeant Arrowood’s question was a resounding no. United States forces soldiered on with the little loved rifle grenade until the advent of the M79 40mm grenade launcher during the early stages of the Vietnam War.

British and Commonwealth forces came close to having a knee mortar of their own with the excellent Ordnance ML two-inch mortar. A 51mm weapon, it too was fired with no bipod and a lanyard trigger. It was so effective that it continued to equip troops around the world for decades after World War II. An updated version, the L9A1 51mm mortar, is in use today. The two-inch mortar, however, was issued only at the rate of one per platoon.

Today, the visage of the knee mortar lives on in the form of the “commando mortar,” models of which are currently being manufactured in Austria, Chile, Spain, Turkey, South Africa, and elsewhere. These new, lightweight 60mm mortars are designed for much the same purpose as the venerable Japanese Type 89. They are fired by hand without a bipod, make use of simple sights, and are specifically intended to give small groups of light infantry or special forces immediate indirect fire of their own.

The knee mortar itself may be gone, but the concepts it pioneered live on today. (Get the back story on these and other weapons from the Second World War inside the pages of WWII History magazine.)