What if the D-Day Invasion Had Failed?

If the Allies did not secure a strong foothold on D-Day, Eisenhower would have been forced to make public the message he drafted for such an occasion.

The Normandy Invasion (code-named Operation Neptune) was the largest amphibious invasion in the history of armed conflict. It combined efforts from nearly 290 escort vessels, 5,000 landing and assult craft, and 160,000 troops. Casualties in the first 24 hours of the invasion were at least 12,000 Allied soldiers and 1,000 Germans.

Still a gamble, it was not assured during the early hours of the landings that the invasion was going to be successful. According to the National Archives, General Eisenhower’s doubts about success in the face of a highly-defended and well-prepared enemy led him to consider what would happen if the invasion of Normandy failed. If the Allies did not secure a strong foothold on D-Day, they would be ordered into a full retreat, and he would be forced to make public the message he drafted for such an occasion. It reads:

“Our landings in the Cherbourg-Havre area have failed to gain a satisfactory foothold and I have withdrawn the troops. My decision to attack at this time and place was based upon the best information available. The troops, the air and the Navy did all that Bravery and devotion to duty could do. If any blame or fault attaches to the attempt it is mine alone.” 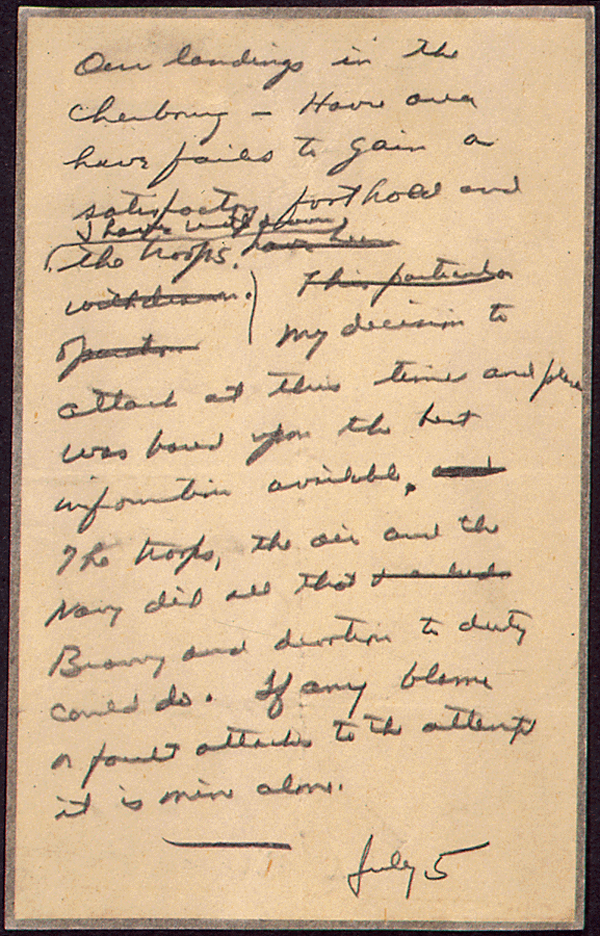 One thought on “What if the D-Day Invasion Had Failed?”