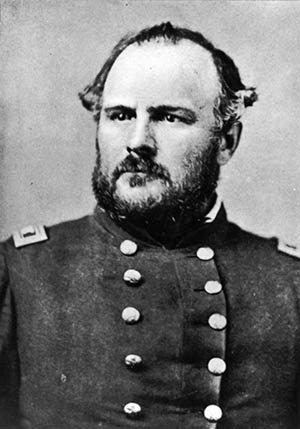 For his part in the Sand Creek Massacre and his lust for power, John Chivington is often regarded as one of America's worst leaders in history.

John M. Chivington was a prominent military commander during the American Civil War in the West. Initially an ordained Methodist Minister, Chivington would abuse his position as a military commander, leading the federal government to condemn his actions as an officer of the United States Military.

John Chivington achieved his short-lived military fame at the Battle of Glorieta Pass, commonly considered the “Gettysburg of the West” in March 1862. Chivington was able to secure information regarding the location of Rebel supply trains, leading his men to burn Rebel supplies. Once the Confederate commanders realized that their supplies had been plundered, they retreated to San Antonio, ending their offensive campaigns in New Mexico and the West.

A Private War With the Native Americans

Chivington returned to Colorado and was promoted to Commanding Colonel of the Military District of Colorado. He would ride this wave of success and campaign for Colorado’s first congressional seat, leveraging his military authority to promote issues that would bolster his public image. This led to Chivington’s self-appointed campaign in 1864 to eradicate militant groups of Native Americans that had been harassing Colorado settlers for the past four years.

Having found no violent Native American tribes during the first two months of the campaign, Chivington advanced on Fort Lyon in Southern Colorado, where Arapaho and Cheyenne tribes were camping under the protection of Federal troops as outlined in the Camp Weld Council. He attacked the peaceful tribes in what has become known as the Sand Creek Massacre. Chivington sent word back to Denver of his courageous victory over the rebellious savages and was initially hailed as a hero upon his return.

The United States Congress’ Joint Committee on the Conduct of War found that Colonel Chivington “took advantage of their [tribes at Sand Creek] inapprehension and defenseless condition…desire for political preferment prompted him to this cowardly act.” It was also concluded that Chivington’s term as Commanding Colonel of the Military District of Colorado had ended two month prior to Sand Creek, further highlighting his vigilante attitude and contempt for American military authority.

Though never charged or indicted, Chivington would nevertheless live out the remainder of his life in a reprehensible manner. He was arrested for stealing $800 from a dead body during his stint at the Denver Coroner’s office, lost his job as Sheriff of Arapaho County, Colorado, for allegations of perjury and married his daughter-in-law to make claims on his late son’s business ventures. The Methodist Church thus disassociated with Chivington for his lack of morals.

It was not Chivington’s grasp of military tactics or leadership that made him one of America’s worst leaders in history, but his motives and morals. He used the prestige of the United States military to further his personal power, inflicting pain on innocent people. In a speech given in Chivington, Colorado, in 1887, Chivington thanked the population for naming their town in his honor, stating, “I stand by Sand Creek.”