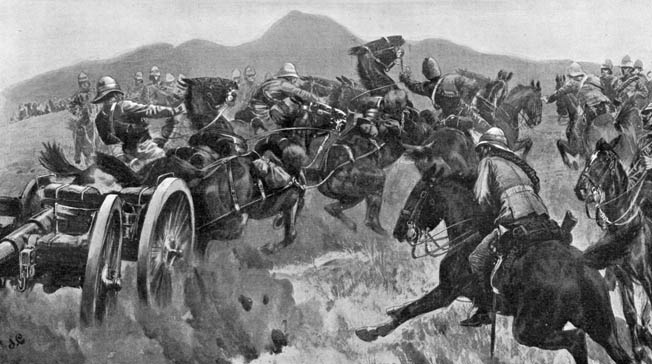 In the aftermath of the failed attempt by Dr. Leander Starr Jameson and his 600 horseman to overthrow the Traansvaal Republic’s government in January 1896, the Boers in both republics embarked on a spending spree to arm all able-bodied burghers with state-of-the-art rifles.
[text_ad]

Commandant-General Piet Joubert placed orders for as many as 36,000 single-shot British Martini-Henry rifles, which the British infantry had used in the First Boer War of 1881. But far better rifles were available. Disgusted that Joubert had squandered money on obsolete rifles, Traansvaal President Paul Kruger instructed Joubert to place another order—this time for 37,000 German-made Mausers to arm all able-bodied burghers at the cost of more than $1 million.

By the 1890s, both the British and the Germans were manufacturing small-bore, high-velocity rifles that substantially increased a soldier’s rate of fire by drawing new rounds from a magazine. The British Lee-Enfield and the German Mauser were state-of-the-art weapons embodying impressive technological advances made in the second half of the 19th century. One of these advances was the brass cartridge which, first introduced in the 1840s, paved the way for single-shot breech loaders, and eventually for magazine-fed repeater rifles. Another key development, that of smokeless powder, greatly increased the efficiency of the guns, resulting in a flatter trajectory and greater muzzle velocity.

The Mausers greatly evened the odds for a nation of citizen-soldiers pitted against well-trained British forces. Each Boer was a marksman who had honed his skills hunting game to put food on the dinner table. In the conventional portion of the war, well-protected Boer forces on the defensive either in trenches or atop kopjes using the Mauser were able to shred British infantry attacks across open ground. The result was that the British had to rewrite their infantry manual from scratch. They eventually adapted and began employing such tactics as open formations, movement by leaps and bounds, and artillery screens to protect advancing infantry.

The Martini-Henry, first manufactured by the British in 1871, was a single-shot rifle that discharged a heavy round of 0.45 caliber at a muzzle velocity of 1,350 feet per second. The rifle’s single-shot action was developed by Friedrich von Martini of Switzerland and used the Henry Rifling System designed by Alexander Henry. The introduction of the magazine-fed Lee-Metford rifle in 1888 led to a gradual phasing out of the single-shot Martini-Henry.

The Boer Republics purchased improved Martini-Henrys in bulk quantities in the 1890s and sold them to burghers at prices as low as four pounds sterling. When Lord Frederick Sleigh Roberts issued an amnesty program in which he called on the burghers to turn in their rifles and go home, many craftily turned in variations of the Martini-Henry, as opposed to the coveted Mauser.

The Model 96 Mauser Rifle: Advantages of a Quick Reload

Paul and Wilhelm Mauser perfected the bolt-action rifle and, as a result, won the race among industrialized nations of Western Europe to develop the best rifle for the late 19th-century battlefield. They first introduced the magazine-fed Mauser in 1871. The reliability and precision of the M/71 established the Mauser brothers as the best rifle makers in the world. In the following years, they would issue new patterns which were sold around the globe.

The mainstay of the Boer forces during the Second Boer War was the Mauser model of 1896, which was almost identical to the Model 93 used by the Spanish army. The Boer Mausers had various dates inscribed on the receiver, indicating different patterns made in 1895, 1896, or 1897, but they all incorporated the same basic features embodied in the so-called Spanish Mauser.

The Model 96 fired a 7 mm (0.276-inch) bullet in a smokeless cartridge with a muzzle velocity of 2,296 feet per second. The weapon was sighted for 2,000 meters but was most effective at half that distance. It used a fixed vertical box magazine that held a five-round clip.

The Boers carried their ammunition in five-round clips, which they locked into the Mauser with a firm push of the thumb. The clips gave the Boers a clear advantage over their enemy, even when the British were armed with the Lee-Metford or Lee-Enfield, both of which had 10-round magazines. The Boers could quickly reload the Mauser magazine using the clips, whereas the magazine of the newer British rifles had to be reloaded one bullet at a time. For some inexplicable reason the British never developed a clip for the rifles during the conflict.

The British struggled throughout the war with finding a rifle comparable to the Mauser. At the outset of the conflict, the British infantry used the 1893 version of the Lee-Metford. The Lee-Metford used an obsolete black-powder cartridge containing a .303 (7.7 mm) round. When the war broke out in 1899, the Lee-Enfield Mark I was available but in an ironic twist the British quartermasters decided to let the regular soldiers wear out their older Lee-Metfords before supplying them with Lee-Enfields. The Lee-Enfield, distributed first to British reserves and eventually to the regulars, incorporated a number of improvements over the Lee-Metford relative to the number, depth and width of grooves in the barrel, as well as using a smokeless cartridge. The Lee-Enfield also fired a .303 caliber bullet with a muzzle velocity of 2,060 feet per second.

The Lee-Enfield attracted Boer attention as their forces began running short of the 7 mm ammunition for the Mausers. In his raid on the British base at Roodewal on June 7, 1900, Boer Commandant-General Christiaan De Wet and his men seized all of the .303 ammunition they could find for the captured Lee-Metfords and Lee-Enfields they were beginning to use as Mauser ammunition dried up.