In the epic conflict between the formidable Hoplites and the mighty Persians, who really won the Battle of Cunaxa?

The Greek hoplite of 401 bc was the most formidable fighting soldier of his day. Every soldier was protected by his panoply, which consisted of his shield, helmet, sword, spear, and greaves (leg guards). When worn, this ensemble could weigh as much as 50 to 70 pounds. The helmet alone weighed about five pounds, and though it protected his head it also took away, or severely restricted, his senses. The Corinthian helmet encased much of the head in a wall of solid bronze. Hearing was impaired and vision was restricted due to narrow eye slits. The breastplate was usually made of bronze, or layers of canvas or linen glued together and reinforced with metal scales.; [text_ad]

Being heavily armored was only one reason for Greek success; the phalanx battle formation was another. The phalanx was a solid body of hoplites fighting shoulder to shoulder, a formation that demanded not only great physical strength, but also complete interdependence with one’s fellow soldiers. A phalanx was a paradox, a body of men who were at once together, yet at the same time terribly isolated and alone. Each hoplite was enveloped in a hot, stifling, sweat-drenched bronze world of his own, a solitary universe where sheer instinct had to take the place of impaired senses.

Yet at the same time this very isolation fostered a dependence on fellow soldiers within the phalanx. In battle, hoplites depended on feeling the external pressure of the men all around him. Since it was the custom to carry shields on the left arm, each man depended on his neighbor to the right to protect his vulnerable right side. A wall of iron-tipped spears was presented to the enemy, but if a spear broke on impact the hoplite could reverse the shattered weapon and use the bronze butt end—though not without some risk to his fellow hoplite behind him. The phalanx had faults, and the Romans were to discover ways of defeating it 200 years later, but in the late 5th and early 4th century bc it was the world’s most formidable tactical formation.

The Differences Between The Two Mighty Armies

The Persians had nothing like the hoplites, and certainly nothing like the phalanx formation. Many of their troops, including subject peoples like the Egyptians, had only wooden, or even wicker, shields. Few, if any, Persian soldiers were as heavily armored as their Greek opponents, and most had javelins or spears. The Persians did excel in light cavalry tactics, with horsemen armed with javelins or bows sending up clouds of missiles on hapless opponents.

The Greeks were so wedded to the hoplite infantry concept they scorned the idea of cavalry. There was some logic behind their disapproval; the Greeks did not have stirrups, and so it was harder to stay on a galloping mount in battle. But Greeks like Xenophon learned from hard experience the value of the mounted arm. Xenophon even atoned for his previous opinions by writing two books on the subject, Peri hippikes (On Horsemanship) and Hipparchikos (Cavalry Officer).

The matter of Greek versus Persian tactics is brought into sharp relief by the Battle of Cunaxa. Conventional historical wisdom says that the Greeks won the Battle of Cunaxa by routing the Persian left wing. Tired but triumphant, the Greeks had victory snatched away by Cyrus’s rash advance and subsequent death. Even ancient writers like Isocrates claimed that “Cyrus’ Greeks defeated the King’s whole power.” But did they? 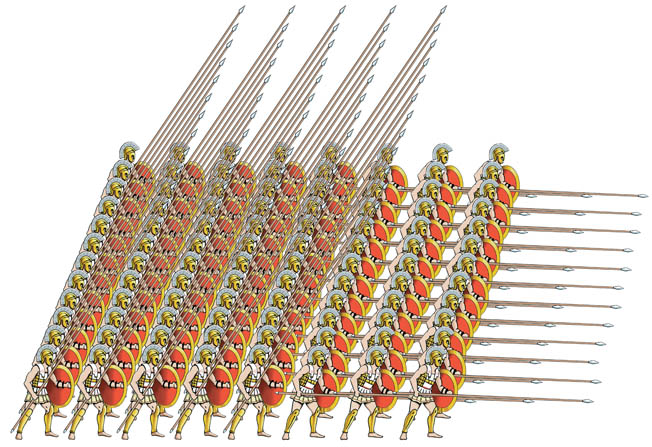 Recently some scholars such as C.T.H.R. Ehrhardt have questioned this conventional wisdom. They claim that, on the contrary, it was the Persian satrap Tissaphernes who really won the battle. Tissaphernes was well aware of the Greek phalanx and its formidable reputation; he had been in contact with the Hellenic world for perhaps 15 years. He knew the Persians had nothing that could stand against them, and so the best solution was to remove the Greeks from the picture.

During the battle, the Persian left (under Tissaphernes, no less) fled as the Greeks advanced; there was no attempt at even a token resistance. The Greeks pursued their quarry for over an hour, ending up miles away from the main battlefield. Once the Greek threat was neutralized, Tissaphernes could easily deal with the native troops under Cyrus’s command. What no one could predict, not even Tissaphernes, was the bonus of Cyrus’s headstrong charge to engage his brother. The death of Cyrus was an added bonus to what was already a Persian victory.

The headlong Persian retreat must have been a ploy to remove the hoplites from the field, at one stroke depriving Cyrus of his best troops. The behavior of Arta- xerxes provides circumstantial evidence that Tissaphernes’ retreat was only a ruse. The satrap was not disgraced in the aftermath of Cunaxa; in fact, he continued to hold the Great King’s favor. Hardly the reward for a man who led a precipitous retreat!