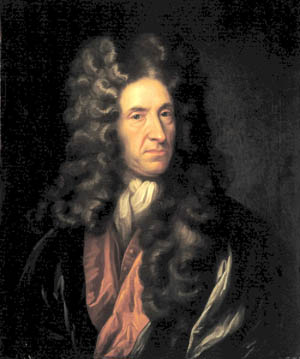 When the Duke of Monmouth began his doomed, quixotic march across southern England in the summer of 1685, one of the few volunteers to join him from royal-dominated London was a 24-year-old hosiery merchant and trader named Daniel Defoe. The son of a nonconformist Protestant family named Foe, Defoe changed his name to a more refined version after he married a wealthy young woman, Mary Tuffley, more or less for her dowry (Defoe himself is believed to have been homosexual).
[text_ad]

As Monmouth made his way toward London, Defoe slipped away to join the rebel forces, possibly in the company of three former schoolmates from Morton’s Academy, a Protestant hotbed of learning in northern London. For the rest of his life, Defoe maintained a discreet silence about his actions that summer, although he once remarked disgustedly: “I remember how boldly abundance of men talked for the Duke of Monmouth when he first landed; but if half of them had as boldly joined him sword in hand, he had never been routed.”

Two decades later, touring the area of Monmouth’s disastrous defeat at Sedgemoor, Defoe attributed the defeat to the duke’s failure to cross the impassable ditch at Langmoor Rhine and the accidental discharge of a pistol by one of the duke’s men. “Had not these accidents conspired to his defeat,” Defoe wrote, “he had certainly cut the Lord Feversham’s army all to pieces, but by these circumstances, he was brought to a battle on unequal terms, and defeated. The rest I need not mention.”

Somehow, Defoe evaded capture after the battle. His job as a merchant gave him a plausible excuse for riding about the countryside, and he may have taken refuge from royal pursuers in a darkened churchyard. (A popular legend that he saw the name “Robinson Crusoe” on one of the tombstones has never been proven.) His old classmates—remembered only by their last names of Battiscombe, Jenkyns, and Hewlett—were not as fortunate. They were rounded up and sent to the gallows along with another 330 rebels in the kangaroo court proceedings known as the Bloody Assizes.

Defoe hid out for the next two years in Scotland and possibly on the Continent before being pardoned by King James II in a general amnesty of “all fugitives and persons fled from our justice of our into parts beyond the seas or out of this our realm.” The pardon did not make Defoe noticeably grateful. A few months later he published his first political pamphlet, A Letter to a Dissenter, from His Friend at The Hague, in which he characterized the king’s mercy as an attempt “to wheedle unthinking people and to catch them with a very inviting bait.” And when William of Orange came over from the Netherlands a year later and overthrew the Catholic monarch in what fellow Protestants called the Glorious Revolution, Defoe was one of the first to ride out to greet the new king upon his arrival in London.

Defoe’s experience at Sedgemoor would influence the writing of his great novel Robinson Crusoe, whose shipwrecked hero was based in part on the adventures of Dr. Henry Pitman, a Monmouth supporter who had been exiled to the Caribbean during the Bloody Assizes and later escaped to the island of Salt Tortuga off the coast of Venezuela. Author Tim Severin has made a persuasive case that Defoe met Pitman either at the time of Sedgemoor or years later at the office of Defoe’s publisher, whose own father had published Pitman’s memoir, A Relation of the Great Suffering and Strange Adventures of Henry Pitman, Surgeon. Either way, it must have been uncomfortably apparent to Defoe how close he had come to sharing a similar fate. No wonder he felt like a castaway on a desert island.