In recent years, the U.S. military has made significant announcements on the replacement of its old equipment, much of it dating back to the Cold War. The military confirmed its bid in 2015 to purchase the JLTV to replace the iconic but flawed Humvee. This January, the military announced that the affordable polymer Sig M17 would replace the aging M9 Beretta as its standard service pistol.

But even more change is on the horizon: The military has recently announced that it will issue a new combat helmet that is set to make waves in the advancement of armored protection. 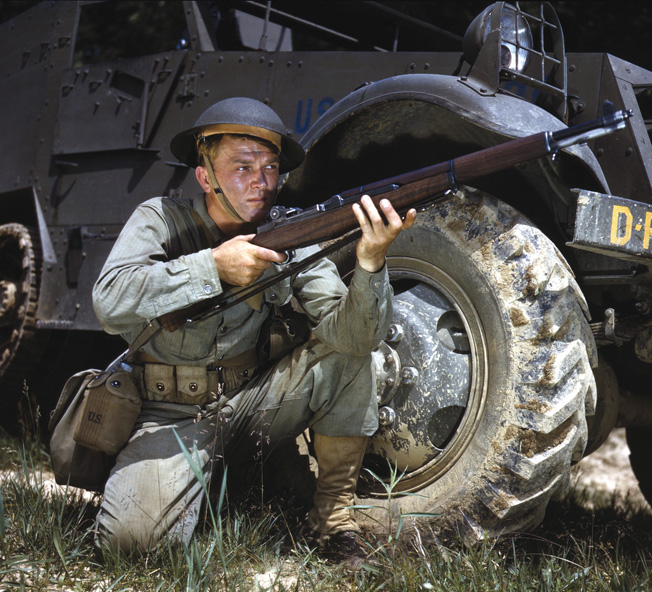 Check out our story
“From Doughboy to GI Helmet”
here!

It’s the new Advanced Combat Helmet (ACH) Generation II, and while cosmetically it’s identical to the old ACH/MICH Kevlar helmets, it could not be further from them. That’s because the ACH Generation II is not a Kevlar helmet at all. The new helmet actually uses  ultra-high-molecular-weight polyethylene, which allows for a 22 percent reduction in weight. That could save soldiers up to 12 ounces of weight on their heads.

From the Doughboy to the ACH Gen II

The move toward the new material is a significant step in U.S. combat helmet progress.

The US military has come along way from the old Doughboy helmet of the First World War. The steel M1917 was the first standardized combat helmet of the U.S. military, and reflected trends in modern combat equipment that began in World War I. The war ushered in the era of the artillery. Howitzers and mortars of increasing size would dot the battlefields of Europe as manufacturing capabilities became more advanced and more capable of producing large and powerful guns. As a consequence, soldiers were driven underground to escape murderous shrapnel and fragmentation from heavy timed shells.

In order to enhance infantry protection from this evolving threat, European armies increasingly began fielding steel helmets. The British Brodie helmet was one of these helmets. The Brodie was designed with a wide brim to protect the narrow silhouette that a soldier standing in an open trench would offer to a splintering shell above him. When the United States entered the war in 1917, its military would adopt this helmet pattern, designating it the M1917. This helmet pattern would serve from the First World War to the beginning of World War II.
[text_ad]

The M1 “GI” helmet of World War II was the next great innovation after the M1917, and was the first true American helmet design to be standardized. Earl Rickard details the transition from M1917 to M1 extensively in the article “From Doughboy to GI Helmet”.

After World War II, the GI helmet served notably in the Korean and Vietnam Wars with minor modifications.

The 1980s began the age of Kevlar with the PASGT helmet, an icon of America’s wars in the Middle East. Kevlar offers far greater protection compared to steel with far less weight. The ACH/MICH Kevlar helmet continued that trend, while reducing the helmet profile and giving it greater modularity. Kevlar helmets, while offering more protection than steel equivalents, still produce a burden for soldiers, especially when adding the full armored load-out of the modern U.S. soldier. Current U.S. infantry can carry up to 70-80lbs of equipment including their armor.

Now with the ACH Generation II, we may very well see a new era of battlefield armor, reducing the tactical weight of soldiers on the ground and, in so doing, increasing combat effectiveness and decreasing fatigue and battlefield injury.