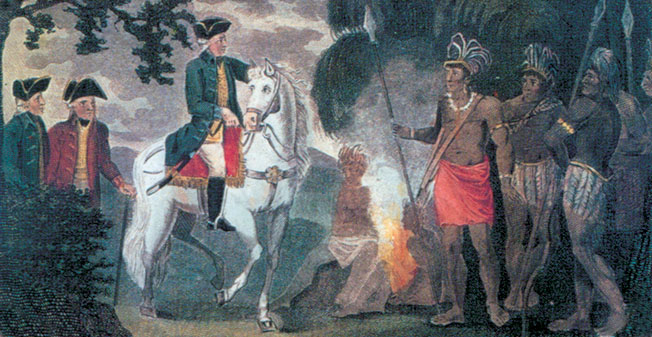 Like many of the Loyalists who served in the British Northern Department during the Revolution, Justus Sherwood was a rough-and-tumble frontiersman.

Born in Connecticut in 1747, Justus Sherwood moved west into the rugged New Hampshire Grants (later to become the state of Vermont) in 1766 where he took up trading, surveying and making potash. It was here he became friends with Ethan Allen and eventually become a Green Mountain Boy.
[text_ad]

Sherwood quickly found himself in turmoil with New York settlers over ownership of the Grants. He soon had a price on his head and was labeled an outlaw—along with Ethan Allen and Seth Warner—by New York authorities for their role in defending their land and rescuing their friends who had been arrested.

When the Revolution broke out, Sherwood believed it was in the Grants’ best interest to stay loyal to the Crown, which brought him in contempt of his Rebel neighbors. In 1776, he was arrested by the Committee of Safety and sentenced to life in the horrific Simsbury Mines. Fortunately for Sherwood, he escaped before reaching the mines and took to the hills eluding recapture.

In October 1776, he piloted 40 Loyalists to Crown Point and enlisted in the Queen’s Loyal Rangers. He was commissioned a captain. Being a woodsman and familiar with the New Hampshire Grants and Lake Champlain, Captain Sherwood and five men were dispatched in March of 1777 to scout the Rebel Northern Army for the coming invasion.

For 41 days Sherwood and his men kept an eye on Rebel activity, making sketches of Fort Ticonderoga and Mount Independence. Things turned bad when two of his men were captured. Sherwood and the remaining men made a daring escape when they seized the boat of Rebel scouts and rowed back to Canada. A few months later, Sherwood was back at Fort Ticonderoga with Burgoyne’s Army.

After the Rebel evacuation of Ticonderoga, Sherwood led a party of Loyalists and Indians to Hubbardton where he took two prisoners. He continued scouting during the early part of the campaign and was with Baum at the battle of Bennington. Sherwood skillfully led his men through the Rebels and to safety when the Hessians were defeated.

“Capt. Sherwood … was forward in every service of the danger to the end of the campaign,” commented Burgoyne on Sherwood’s duty with his army. After Burgoyne’s surrender Sherwood returned to Canada, where in time he found himself on scouting duties in enemy territory and interrogating Rebel prisoners. He failed in an attempt to negotiate a separate peace with Vermont and the British.

He settled in Canada after the war and returned to his life as a frontiersman.