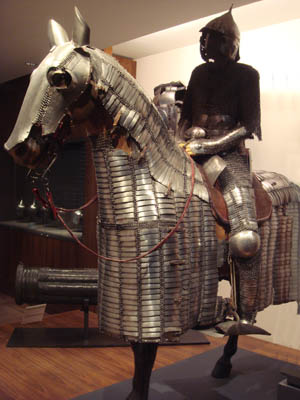 Creators of cataphracts, barding and other types of horse armor used whatever metal was at hand, iron or bronze, and often stiffened the scales with leather.

In 1932 a team of American and French archeologists working at the ruins of Dura-Europos, site of an ancient fortress on the Euphrates, made an amazing discovery. While digging in one of the crumbling towers, they discovered a cache of weapons including two sets of scaled armor designed for horses. One was made of iron, the other of bronze. It was the first nearly intact set of horse armor found and gave living illustration of the fearsome heavy cavalry of the Middle East known as the cataphract or clibanarii.

Stout war horses bred for strength had been protected by scaled metal armor since the eighth century bc. The creators of the armor used whatever metal was at hand, iron or bronze, and often stiffened the scales with leather. Thick, felt blankets protected the animal from the heavy metal that fit over its back like a horse blanket. Different designs covered more or less of the horse.
[text_ad]

Wide Variations in Style and Function

The Parthian and Sassanid Persians perfected the tactics that could crush an infantry army such as the Romans almost always deployed. Supported by swift horse archers on its flanks a troop of tightly packed cataphracts moved at a trot across the plain against its foes.
The principal weapon of the heavy cavalry was a 12-foot lance called a kontos. It had a knife-like blade on the business end and a butt spike at the other. Swords, daggers and even the powerful composite bow were auxiliary weapons.

A downward stab of the kontos followed by an upward thrust, sometimes with both hands, was designed to impale and unseat an enemy horseman or ram through an infantry shield. Sometimes battle tactics called for the cataphracts to merely disrupt an infantry line so that the supporting horse archers would have a clear field of fire at a scattered enemy.

The find at Dura-Europos was significant because that city, so close to the Persian world, had been a Roman outpost for a hundred years. It was also a satellite fortress of Palmyra and served the purpose of protecting vital trade routes to the desert-bound city. At the time when Dura fell to Shapur I in 256, it was defended by Palmyran troops in Roman service. They were probably commanded from Palmyra by Odenathus, husband of Zenobia.
The backbone of Zenobia’s army during her two pitched battles with Aurelian was this heavy cavalry, probably Persian mercenaries.

They would have expected to scatter the Roman infantry like chickens as their forefathers had done against Crassus at Carrhae. In that memorable battle, a thousand cataphracts and 10,000 horse archers demoralized and utterly defeated nearly 30,000 Roman legionaries.

But Aurelian was ready for them. In his early career he had been sent on an embassy to Persia on behalf of the Roman Emperor Gordian III (238-244). He may have seen the cataphracts at close range. Perhaps he saw them drill. In any event, when faced with them in battle, he was able to improvise tactics to overcome them by removing his vulnerable infantry from harm’s way.

A Force in the Struggles in the Middle East

The cataphract and its supporting horse archers would continue to be a force in the struggle between the two mighty empires in the Middle East. Then in the seventh century the unstoppable light cavalry of the Arab tribes exploded out of the desert aflame with Islam and at last put an end to the thousand-year rivalry between the Greco-Roman and Persian empires.