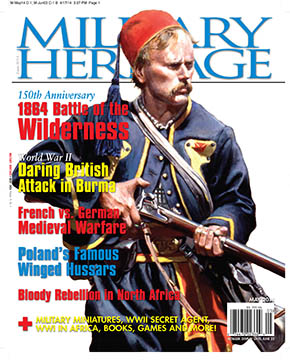 Longstreet's daring advance, Germany's tiger tanks along the Eastern Front and more inside this issue of Military Heritage Magazine.

At the Battle of the Wilderness in May 1864, James Longstreet delivered a dramatic blow to the Union Army, designed to secure a decisive Confederate victory. But of course, his wounding halted the attack short of complete success.

In “Always Grand in Battle,” Arnold Blumberg takes you south of the Rapidan River, just before midday on May 6. When the head of the Confederate column reached a point perpindicular to the left bank of the Union Army, they halted. The troops then faced north to prepare to advance swiftly through an emerald ravine toward the unsuspecting enemy.

When Confederate Chief of Staff Lt. Col. G. Moxley Sorrel left to form his flanking column, he remembered well the words Longstreet spoke to him just before he left:

“Hit hard when you start, but don’t start until you have everything ready. I shall be waiting for your gunfire, and be on hand with fresh troops for further advance.”

As you’ll read in the May 2014 issue of Military Heritage magazine,  the result was predictable and fearsome.

Of course, “Always Grand in Battle” is just one of many features you’ll find inside our May issue. Covering pivotal moments in military history from Charles of Anjou to Germany’s Tiger Tanks of World War II, you’ll also find inside:

“For Gold and Blood”
The papacy recruited Count Charles to lead an army to oust King Manfred of Sicily. The matter was settled at Benevento in 1266 in a grad clash of mounted knights.

“Outfoxed in Burma”
Lieutenant General William Slim sent a fast-moving column across the Irrawaddy River in January 1945 to capture the supply depot at Meiktila. The surprise attack hastened the collapse fo the Japanese position in central Burma.

“Massacre in Morocco”
The French responded to a request in 1911 from Sultan Moulai Hafid to help him put down a major rebellion. They crushed the rebels in bloody fighting and established a protectorate.

“Incomparable Bravery”
For more than two centuries, Poland’s winged Husaria were a dominating presence on the battlefields of Eastern Europe. They remain to this day an important symbol of Polish military tradition.

In addition to our features, this month’s departments include stories about World War I guerrilla leaders, World War II’s Eastern Front and a number of book reviews.

Let us know what you think about these and other stories inside the May issue by dropping us a line on our website. If you aren’t yet a subscriber, you can pick up a print or digital edition today and start joining in on the action.