As a blast from the 30-year-old past, Argonauts Interactive has successfully re-released the 1985 classic, Colonial Conquest.

Argonauts Interactive’s take on Colonial Conquest retains its dedication to simulating aggressive expansion and achieving global dominance by any means necessary. Colonial Conquest is set in the Victorian age of the late 1800s and early 1900s, featuring the ability to play as the United States, Great Britain, France, Germany, Russia, and Japan. Choose your side and you have the potential to conquer more than 130 regions, all the while paying careful attention to resource management, deceitful tactics against your opposing forces, and the strategic positioning of your nation’s attack fleets. 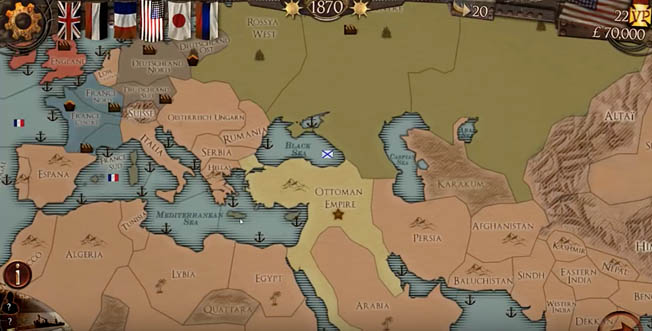 Depending on which country is chosen, players will be able to take on the role of historical figures like Theodore Roosevelt, Grover Cleveland, Queen Victoria, Jules Ferry, Tsar Alexander III, Kaiser Wilhelm II, and Emperor Meiji. There are options to play against the AI or online multiplayer with other players, so there’s plenty of challenge to be had whether you choose to go it alone or test your might and your wits against friends.

If you’ve never played Colonial Conquest before, this is a nice way of digging into a classic with a modern coat of paint and some added bells and whistles. Strategy games like this one can get pretty deep and intense, especially once you get the hang of it and start doing impressively sneaky things, like sending out spies and managing bribes on a consistent basis. Whatever it takes to secure your position at the top of the global domination heap. Hopefully we’ll see more updated takes on the classics in the not too distant future.