Relieving weary paratroopers of an epic eight-day siege at Bastogne, Colonel Abrams became one of the heroes of the Battle of the Bulge.

On the chilly afternoon of Tuesday, December 26, 1944, a column of mud-caked Sherman tanks, halftracks, scout cars, and tank destroyers of the U.S. 37th Tank Battalion was drawn up on a roadside in southeastern Belgium. It was ten days into the Battle of the Bulge.

For five tough days, the spearhead 4th Armored Division unit had advanced only 22 miles. It had been ordered by General George S. Patton Jr., commander of the U.S. Third Army, to “drive like hell” toward its objective: the relief of the besieged 101st Airborne Division in the strategic road-junction town of Bastogne. But the battalion had been held up by the German 5th Fallschirmjager (Parachute) Division, along with landmines, shell craters, snow, fog, and iced roads. And no one knew what lay ahead on the road to Bastogne. 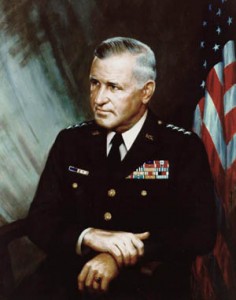 The battalion was five miles short of its goal that afternoon when its commander, Lieutenant Colonel Creighton Williams Abrams, Jr., stood on a hill and gazed northward toward Bastogne. Born in Springfield, Massachusetts, the oldest son of a Boston & Albany Railroad repairman, Abrams was a stocky, lantern-jawed, cigar-chomping cavalryman who had graduated from the U.S. Military Academy in 1936 and become a courageous, resourceful professional soldier respected by all who knew him. He had earned the respect of Patton.

On that December 26, 1944, Abrams was down to 20 tanks, enough for one more assault. Should he take a chance and ask for permission to head straight for Bastogne, regardless of the strength of enemy opposition? Just then, waves of Douglas C-47 transports roared overhead and started parachuting supplies into Bastogne. Abrams’s mind was made up, and he dashed back to his Sherman, nicknamed “Thunderbolt IV,” and radioed Major General Hugh Gaffey, commander of the 4th Armored Division, for permission to move ahead. The word came a few minutes after 3 p.m.

Impassive, but with his eyes glinting, Abrams stuck a large cigar in his mouth, clambered into the turret of his tank, and radioed to his men, “We’re going in to those people now. Let ‘er roll!”

Supporting artillery fire pounded the immediate objective, the village of Assenois, and Colonel Abrams’s battalion rumbled forward down a slope and through a patch of woods. Halftracks filled with infantrymen followed the Shermans. Dusk was veiling the snow-clad countryside as the first nine tanks, commanded by Lieutenant Charles Boggess, clanked through Assenois.

Shortly before 5 p.m., Boggess jumped from his tank at the Bastogne defense perimeter and shook hands with a grinning engineer lieutenant from the 101st Airborne Division. Weary paratroopers cheered at the lifting of the epic eight-day siege, and the “Battered Bastards of the Bastion of Bastogne” now belonged to a proud brotherhood in military history.

Heroes of the Bulge

Colonel Abrams himself had just become one of the heroes of the Battle of the Bulge, along with Brigadier General Anthony C. McAuliffe, deputy commander of the 101st Airborne Division, who had replied “Nuts!” to a German surrender ultimatum on December 22, General Patton, who had moved an entire corps 90 degrees to the left flank of the Bulge in one of the most brilliant maneuvers of World War II, and many other officers and enlisted men who distinguished themselves in the biggest winter campaign in U.S. Army history.

Captain Abe Baum of the 4th Armored Division said of Abrams, “He was sincere, honest, didn’t speak down to people. In eight or 10 words, he could put more emphasis than someone who spoke for an hour. He led his troops. He didn’t have a headquarters out there in his lead tank. Instead, he was another gun in the tank.”

Patton said, “I’m supposed to be the best tank commander in the Army, but I have one peer, Abe Abrams. He’s the world champion.”

After training on the rolling farmlands of Wiltshire in southwestern England, Abrams had taken his battalion into action in France in July 1944. It led the 4th Armored in breaking out from the Normandy beachhead and in the Third Army’s successful effort to seal off the Normandy Peninsula. The 37th Tank Battalion took part in the bloody breakthrough at St.-Lo, crossed the Saar River, escaped a German ambush while smashing through the Maginot Line, and pushed on toward Czechoslovakia. In the thrust from the Kyll River to the Rhine, Abrams’s unit was credited with destroying 15 tanks, more than 300 other vehicles, 75 artillery pieces, and 75 anti-tank guns. Time Magazine reported that the 37th Tank Battalion was “a fearsome weapon of destruction” under Abrams, who “showed the feel and flair of the born combat man.”

Six “Thunderbolts” Throughout the War

Abe Abrams wore out six tanks – all named Thunderbolt – during the war, but he never had one shot out from under him. He usually rode at the head of his columns, standing in the turret and chewing on a cigar. The New York Times reported, “The retreating Germans were said to be fascinated and terrified by Colonel Abrams because they assumed from his name that he was Jewish, and that he saw himself as a wrathful Jehovah taking destructive vengeance on the Germans for what they had done to the Jewish people.”

Abrams was, in fact, descended from English Methodists. He shared Patton’s philosophy regarding the enemy. “We don’t want the Germans to fall back,” Abe told his tankers. “We want them to defend their positions so we can destroy them and their equipment…Whenever the Germans get us in the wringer, they show us no quarter, so why should we?”

Abrams’s many decorations included two Distinguished Service Crosses, two Silver Stars, and the Legion of Merit. After service in the Korean War (1950-53), Major General Abrams led the 3rd Armored Division in Germany during the 1961 crisis surrounding the construction of the Berlin Wall, commanded troops in the American Deep South during the civil rights struggle of 1961-62, and eventually took command of U.S. forces in South Vietnam in 1968. His intelligent, innovative leadership earned praise, and he was one of the few high-ranking officers to emerge from the Vietnam War with his reputation unscathed. He donned the mantle of Army Chief of Staff in 1972, and oversaw the transition of the Army to an all-volunteer force.

General Abrams died of cancer on September 4, 1974, just 12 days short of his 60th birthday. At his funeral in Arlington National Cemetery, President Gerald R. Ford praised him as “an American hero in the best tradition…that rare combination, a man of action who was also a first-class administrator.”