Choctaw Code Talkers allowed the Americans to execute a surprise attack on the Germans in World War I.

The affection that Europeans have for the Great American West is well known, so it shouldn’t be surprising that several traveling Wild West Shows happened to be in enemy territory when World War I broke out. One was in Berlin, another in Trieste. Both troupes contained a contingent of Native Americans and both were harassed by mobs caught up in patriotic fervor. So it was that the Onondaga and Oneida Indian tribes were insulted enough to exercise their autonomy as nations separate from, but enclosed within, the United States, to declare war on Germany in 1914. They were the first Americans to do so, but not the last.

Many Indian tribes still considered themselves warrior societies and their young men (like many others) were anxious to prove themselves in battle. Since the last fight against U.S. troops had occurred at Wounded Knee in 1890 and their traditional enemies had either been eliminated or rounded up, it seemed natural to take an interest in the war in Europe. In the Northwest some tribes even crossed the border to enlist in Canada, but like most Americans, they usually waited until the United States actually declared war. When it came, some 12,000 Native Americans eventually served, coming primarily from 14 different tribes. Proportionally, their enlistment was higher than any other ethnic groups. For instance, 40 percent of the Osage and Qwapaw tribes volunteered for service. This is particularly interesting considering that Native Americans were not granted official citizenship until 1924.

Of particular interest was the large number of Native Americans who ended up in Oklahoma. Still sometimes referred to as “The Indian Nations,” Oklahoma Territory was the final depository for the remnants of many of the western tribes and most of the eastern, including what was left of the Choctaws, who originally lived in Tennessee and Mississippi. Six hundred Native Americans—primarily Choctaw, Cherokee, Osage, Comanche, Cheyenne, and Yankton Sioux—volunteered for service in World War I in local National Guard units. Most of them ended up in the 142nd Regiment of the Oklahoma National Guard, which became the 36th U.S. Infantry Division. Many of the officers of the 36th were also from the area and believed in the traditional view of Indians as natural hunters and trackers, with abilities superior to those of a white man. Thus, many Native Americans found themselves assigned to be scouts, snipers, and runners.

The 36th arrived in France in late July 1918 and was eventually placed under the command of Marine Maj. Gen. John Lejeune who, with the Marine 2nd Division, was assigned to the French Fourth Army under General Henri Gouraud. On October 3, the division was involved in an attack on Mont Blanc in Champagne. This was to be a general attack all along the line, with the veteran Marines leading the attack uphill toward St. Etienne, mainly against the well entrenched German 200th and 213th divisions. The untried 36th was the reserve. 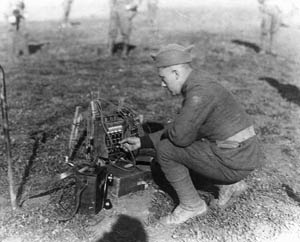 Marine John Thomason recalled, “The morning of October 3rd came gray and misty. From midnight until dawn the front had been quiet at that point—comparatively. Then all the French and American guns opened with one world-shaking crash.… The battalion saw all this ground [in front] swept by a hurricane of shell fire. Red and green flames broke in orderly rows where the 75s showered down on the Boche lines; great black clouds leaped up where the larger shells fell roaring. The hillside and the wood were all veiled in low-hanging smoke, and the flashes came redly through the clouds.”

Although the Germans would later claim that the rapid advance of the Yanks was a result of an orderly withdrawal all along the line, the high number of prisoners captured proved that German morale was suffering badly. Highly effective at a distance or from dug-in positions, when faced with close combat the exhausted Germans at this point of the war tended to surrender.

US General Preferred Resignation to Allying with the French Army

Captain Richard F. Burges of El Paso, Company A, 141st Infantry, later recalled that the Germans “fight under cover, firing from concealed machine guns until you close with them, then they rush out, throw up their hands, and cry ‘comrade’ but it doesn’t look fair and they don’t get much mercy.” Burges “saved” the prisoners, several of whom were boys, “almost children,” when “the capture was made under my own eyes.”

The Americans attacked so aggressively against the well-entrenched German 200th and 213th Divisions that the line surged forward. Two hours later the French line on either side was so far behind that the Marines were vulnerable to fire from the sides and rear as well as directly ahead. In fact, General Lejeune was so disgusted by the failure of the French to keep pace and his perception that they were lagging on purpose that he threatened to resign his commission rather than fight again with French liaison officers by his side.

To relieve the now battered and disorganized 2nd, Lejeune ordered the commander of the 36th, Maj. Gen. William R. Smith, to send two regiments into the line. The 141st and 142nd advanced and relieved the 3rd and 4th Marine Brigades for attacks toward St. Etienne and Mont Blanc. It was during this advance that Choctaw Joseph Oklahombi of the 141st received the Croix de Guerre when he dashed through a heavy artillery barrage and thick wire to attack several enemy machine-gun posts and take dozens of prisoners. It was an extraordinary feat, but because it occurred on October 5, it was overshadowed by Sergeant York’s famous escapade and is little noted.

Colonel A.W. Bloor, commanding officer of the 142nd, reported that, as the regiment advanced, it took up positions in what had been well-established German rear areas. The command posts were comfortable and well furnished and in one instance even boasted a pool table. In addition to an electrical system, the area was still “netted by German wire and cables,” which the 36th quickly put to use.

But the retreating Germans showed obvious signs of knowing American intentions too soon. When an Allied barrage began, it was met instantly by a German counterbarrage. Colonel Bloor suspected that his phone lines had been tapped and the U.S. codes broken. To test his theory, he sent false coordinates for their supply dump by telephone to HQ. Within 30 minutes German shells began landing in that area. With their phone lines tapped, the only other means of communication were pigeons and radios, both of which were unreliable. Semaphore was too slow and short ranged. That left only runners to coordinate the units along an unstable and shifting front. Messengers, small and fast, were usually chosen, and many were Native Americans. But as they ran along the line relaying messages between the forward units, they were definitely not battened down inside the safety of their trenches. Casualties were about 25 percent.

By October 11 the relatively fresh 143rd and 144th Regiments had also advanced and the entire 36th Division paused on the banks of the Aisne River ending the Battle of Mont Blanc, as that segment of the Meuse-Argonne Offensive came to be called. Marshal Pétain considered it the single greatest achievement of 1918. It cost 7,800 American casualties.

As the 36th rested and resupplied, their rear area was located three miles south at Vaux-Champagne. By chance, a Captain Lawrence happened to overhear two Choctaw Indians, Solomon Lewis and Bennington Mitchell Bobb, conversing in their own language. Remembering the trouble the 36th had with German wire tappers, he immediately realized the potential of their language and asked the two how many other Choctaw there were in the battalion. They replied that there were eight with whom they could converse. In addition, the 142nd also contained two Native American officers who each understood several dialects, and that two of the eight speakers—Smithville Ben Carterby and Kullitukle Pete Maytubby—were already attached to the Headquarters Company. Because the Choctaw language had never been written down, it seemed doubtful that “Fritz” would be able to understand it.

Brilliant Use of the Choctaw Language

Captain Lawrence ordered, “Get them and have them stand by. I’ve got an idea that might get the Heinies off our backs.” Speaking to Lewis and Bobb, he continued, “Look, I’m going to give you a message to call in to headquarters. I want you to give them a message in your language. There will be somebody there who can understand it.”

The message was sent by Bobb in plain Choctaw and was received and translated back into English by Carterby at battalion HQ. A few hours later, the eight Choctaw, who also included Wright City Robert Taylor, Bokchito Jeff Nelson, Broken Bow James Edward, and Ida (or Battiest) Calvin Wilson, were dispersed among the different companies and commands. Within 24 hours, the Germans were “flipping their wigs” trying to figure out the new code. 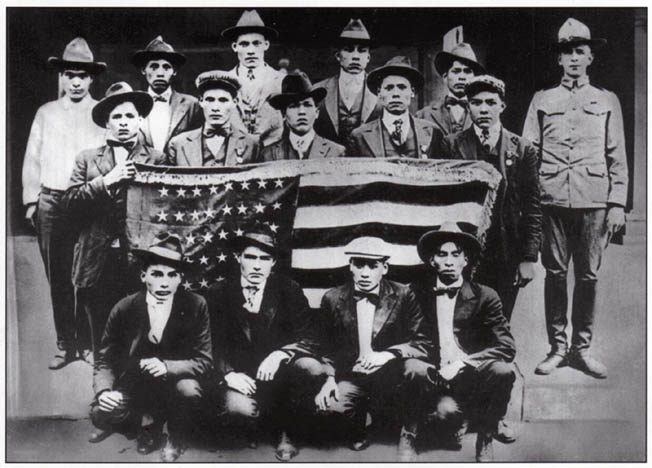 The first real Choctaw messages were used to extricate two companies of the 142nd’s 2nd Battalion from Chufily to Chardeny on the night of October 26. The next day Choctaw was used extensively during the preparation and execution of the attack across the river on the strong point known as Forest Farm. It took the enemy completely by surprise. Their entire garrison was either captured or wiped out, which indicated that the Germans were totally unaware of the attack. Choctaw worked. The next day the 36th was relieved and withdrawn to Louppy-le-Petft.

But the use of Indian languages continued in the rear. Organized under a Lieutenant Black, more Choctaw were added, including Albert Billy, Victor Brown, Tobias Frazier, Ben Hampton, Joseph Oklahombi, and Walter Leach for a total of 14. In addition to the language, a code had to be developed because ordinary Choctaw lacked words for military terms. Artillery therefore became “big gun,” machine gun became “little gun shoots fast,” casualties became “scalps,” poison gas became “bad air,” and the battalions became one, two, or three grains of corn. Fifteen days later the war was over.

Navajo Language was so Valuable it Was Declared Secret

Although the original eight were once promised decorations, none received them. Recognition had to wait until November 3, 1989, when Choctaw Chief Ben Hollis E. Roberts accepted on behalf of the code talkers the Chevalier de l’Ordre National du Merite presented by the French government.

Of little impact in World War I, the concept of using unwritten Native American languages would become particularly important in World War II. Comanche were used in Europe, and over 600 Navajo served in the Pacific where their coded communication was so effective that the Navajo language was determined to be vital to U.S. national security and declared secret. Native speakers were restricted from teaching their own language or even writing it down. Even schoolbooks for children were banned until 1968, when such measures were finally abandoned.