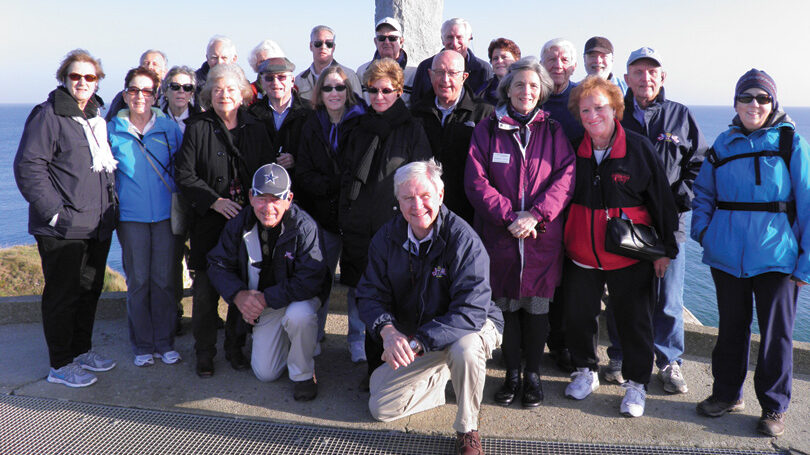 What I did last summer (and fall)

This article appears in: Summer 2015

One of the great things about being a military historian is that you get to go places and meet people you might not ordinarily get to see and meet. Such was the case last summer and fall, when I was privileged to lead three tour groups to England and France for the 70th anniversary of the D-Day invasion.

All three tours were filled with people who are as passionate about history as I am. Many of them had relatives who fought in World War II (and some who died in the war), and we were honored to be allowed to place wreaths at the memorial at the U.S. military cemetery atop the bluffs overlooking Omaha Beach—what an emotional experience!

We were also, as part of these tours, admitted to several places where “ordinary” tourists usually aren’t allowed to go, such as Southwick House near Portsmouth, which was Eisenhower’s and SHAEF’s forward headquarters just prior to the embarkation for Normandy.

At times the tours took on the character of a forced march, enabling us to pack a lot into a very short time: visiting the Churchill Museum and Cabinet War Rooms in London; heading to Bletchley Park where the codebreakers cracked the fiendishly difficult German secret codes; riding in a WWII jeep; hitting an abundance of outstanding museums; exploring the remains of spooky German bunkers; strolling through villages liberated by the Allies; and standing on hallowed ground where thousands of men fought and died and changed the course of world history.

But, despite the pace, I believe that everyone enjoyed every minute of the tours. (There was also great food and excellent accommodations, not to mention the beauty of the English and French countrysides.)

After the third tour in October ended, I decided to stay on for an extra week and explore on my own some places I had not visited before: the bunkers of Hitler’s Atlantic Wall, from Sword Beach northward to Calais and beyond. What an eye-opening experience that was!

My weeklong solo tour also inspired a few upcoming magazine articles, one of which (“Bombing Our Friends”) appears in this issue. Ideas for future articles––such as the massive underground complex at Mimoyecques that was to house Hitler’s “London Super Gun,” which was conceived to relentlessly bombard the British capital, and the creation of the Atlantic Wall––were spawned by my exploring this region of France.

This year I will be involved in more battlefield tours—at least one more D-Day tour, and an Italian battlefield tour for the Minnesota WWII History Round Table. If you have an interest in World War II (and you wouldn’t be reading this magazine if you didn’t), I strongly recommend that you sign up for a tour. (It doesn’t have to be one of mine; there are several reputable companies that offer a variety of battlefield tour packages.)

I guarantee that such a tour will be an experience you will never forget.