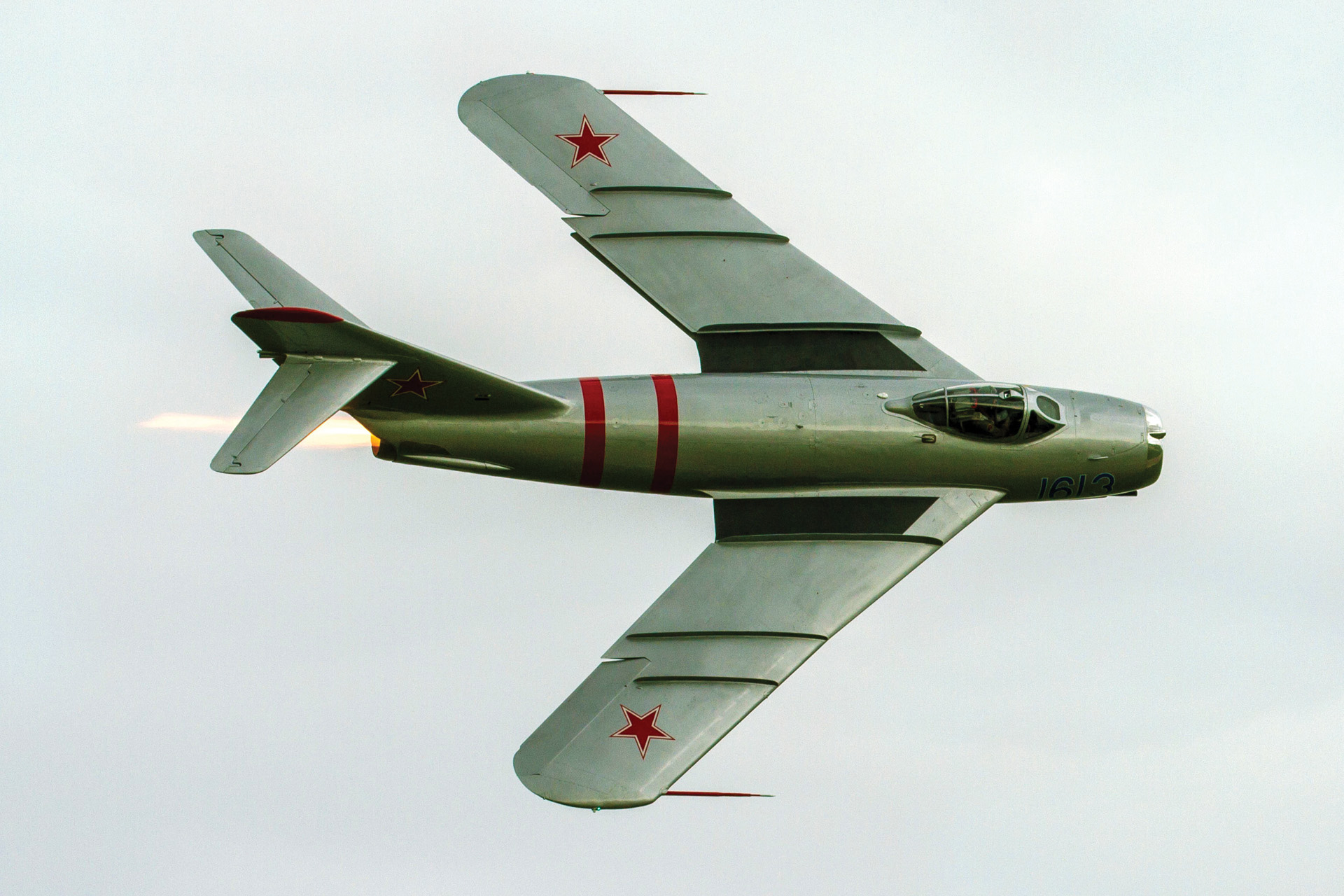 Weapons: The Soviet MiG-17 in Vietnam

The American pilots did not see the North Vietnamese Mikoyan-Gurevich MiG-17 fighter jets approaching their strike aircraft as they zeroed in on Than Hoa Bridge on April 3, 1965. Visibility was good for the American aircraft at their high altitude but became hazy below 5,000 feet. The MiG-17s, flying at 1,000 feet, closed in on the pair of Vought F-8E Crusader fighter-bombers just as they pulled up after bombing the bridge. As the MiGs closed on the Crusaders, Lieutenant Pham Ngoc Lan began his attack, scoring a number of hits with his 23mm cannon.

One of the F8s appeared to explode as it veered downward. Phan’s wingman opened fire on the second F-8. While the North Vietnamese pilots claimed two victories that day, neither Crusader had actually been shot down. But the engagement marked North Vietnam’s first attempt with its MiG-17s to intercept U.S. strike aircraft flying over the communist country.

The MiG-17 was a modernization of the earlier MiG-15 model featuring improved aerodynamic characteristics. This was achieved without giving it a single additional pound of thrust. On the basis of the MiG-17, the first Soviet interceptor, the MiG-17PFU, was built; its armament consisted of four air-to-air guided missiles. Although by the mid-1960s Soviet Air Forces considered the MiG-17 to be obsolete, it performed almost perfectly for North Vietnam during the Second Indochina War.

The first MiG-17s furnished by the Soviet Union to North Vietnam were strictly day fighters, but the communist Vietnamese People’s Air Force (VPAF) would later receive versions that had some capacity for all-weather and night operations.

The single-seat MiG-17 was heavily armed and highly maneuverable. It boasted three 23mm Nudelman-Rikhter cannon and had provisions for two under-wing packs of eight 55mm air-to-air rockets or 1,100 lbs. in gravity bombs.

In spite of ongoing military aid from both the Soviet Union and the People’s Republic of China, the VPAF had just one regiment of MiG-17 fighters in 1964. The American fighter jets, which were superior in both numbers and technology, dominated North Vietnamese air space. Although American pilots enjoyed clear advantages—which resulted in their downing many VPAF aircraft—they always had to beware of the three types of MiGs possessed by North Vietnam coming in to press an attack.

Fifty-two North Vietnamese pilots went to China and the Soviet Union in 1960 to train on the MiG-17. They began returning to their country two years later. To mark this achievement, Moscow sent 36 MiG-17s, along with an unspecified number of MiG-15 two-seat trainers, to Hanoi on February 3, 1964. These aircraft constituted the 921st Sao Do Fighter Regiment.

Given the frequency of U.S. bombing missions flown against North Vietnam, the communist country desperately needed automatic direction-finding radar. As war with the United States heated up, the North Vietnamese had to build up their air-defense system from scratch. Because of the peculiar shape of North Vietnam, which was only 43 miles wide in some places, there was often little warning of incoming attacks. Moreover, the dense jungle terrain made it difficult to transport radar equipment throughout the country.

The North Vietnamese radar system was also limited in the distance at which it could detect enemy aircraft. Due to these limitations, the job of spotting incoming aircraft fell to observers located across the country. The system was far from foolproof, given that the number of outposts was limited, and large flights of inbound American aircraft often went undetected. Without proper direction from the radar units, North Vietnamese pilots often had to locate enemy aircraft using just their own eyes.

North Vietnamese pilots found the MiG-17 capable of swift manuever at low altitudes. With the proper training and experience, they were eventually able to turn inside the heavier American fighter-bombers and use their 23mm cannon to good effect.

In the wake of the Gulf of Tonkin Incident—in which North Vietnamese patrol boats attacked the destroyer USS Maddox on a signals-intelligence patrol on August 2, 1965—Hanoi called home the remainder of its pilots who were training abroad in China and Russia.

Once all of the 921st Fighter Regiment’s planes returning from the Soviet Union and China had landed in North Vietnam on August 6, 1964, each pilot was personally congratulated by senior military officials. Later that day the North Vietnamese placed two pairs of MiG-17s on alert to scramble for aerial combat with the Americans.

VPAF commanders were fully cognizant that their branch of military service was still far from ready to take on U.S. aircraft on anything approaching an equal basis. They had few trained pilots and few aircraft in comparison with the more technologically advanced U.S. aircraft and the better-trained American pilots. The Vietnamese pilots did have one advantage, though: they would be flying over their own country. One VPAF pilot suggested suicide attacks to overcome the American advantage, but Hanoi preferred tactics that would ensure victory with the lowest number of lost aircraft.

In the ensuing air battle, the North Vietnamese claimed they had shot down two F-8Es, but U.S. sources claimed that all four F-8Es returned, with one badly damaged and having to land at Da Nang. Although the MiG-17 pilots had failed to score any kills on this first intercept mission, their primary goal had been met: enemy aircraft had been successfully engaged.

Events took a turn for the worse for the VPAF during summer 1965 as the nascent air force was decimated in aerial battles with highly skilled U.S. pilots flying the most advanced aircraft available to them. Hanoi attributed its heavy losses in MiGs to lack of combat experience, inferior hardware, and over-confident air defense units.

Throughout 1966 and 1967, as the Americans exponentially increased their forces in South Vietnam, U.S. Air Force and Navy aircraft continued their relentless attacks on power plants, industrial sites, major transportation routes, and military installations around Hanoi and Hai Phong. The American strategy was to cut off Hanoi from Hai Phong and isolate the two cities from other parts of the country.

To make the best use of their limited number of fighter aircraft, the North Vietnamese concentrated on defending Hanoi and the system of dikes around the Red River. The VPAF could not respond to every attack, so the pilots had to choose their targets carefully.

In 1971, Hanoi began working on a special mission against the Americans. Ten pilots of the 923rd Squadron were chosen to conduct attacks on ground and maritime targets.

The first maritime attack by MiG-17s, which was known afterwards as the Battle of Dong Hoi, occurred on April 19, 1972. Several MiG-17s, operating in conjunction with North Vietnamese torpedo boats, engaged a powerful task force from the U.S. Seventh Fleet that included the guided-missile cruiser USS Oklahoma City, guided-missile frigate USS Sterett, and destroyers USS Lloyd Thomas and USS Higbee. It was the first time that American warships had to defend themselves against aerial attack since World War II.

One of the MiG-17s scored a direct hit on the Higbee with a 550 lb. bomb. The explosion knocked out the destroyer’s aft 5-inch gun mount, which had been evacuated after a shell had become hung up in one of its barrels. Another MiG-17 made several bombing runs against the Oklahoma City but missed its target. One MiG-17 was downed by a surface-to-air missile from Sterett. Another may have been downed as well, but there was no visual confirmation.

One of the largest aerial battles of the war occurred on May 10, 1972, on the first day of Operation Linebacker. As part of the 414 sorties flown by U.S. aircraft that day, McDonnell Douglas F-4 Phantoms, Grumman A-6 Intruders, and LTV A-7 Corsairs attacked Hai Duong and the bridges at Lai Vu and Phu Luong. Four MiG-17s from the 923rd Squadron scrambled to protect the bridgehead at Lai Vu and engaged the American fighter-bombers. Over the course of the long day, VPAF put aloft four MiG-21s and seven MiG-17s, and the communist interceptor pilots succeeded in downing two U.S. Air Force F-4s.

On January 27, 1973, the warring parties signed the Paris Peace Accords, ending direct U.S. military involvement in South Vietnam. American air strikes ended almost immediately, allowing the North Vietnamese to begin repairing their air bases near Hanoi and Hai Phong. Within days of the of the ceasefire, the 923rd moved its MiG-17s to Tho Xuan, where it kept two fully armed jets on constant alert. A handful of fighters were left at Kien An to defend the strategic port of Hai Phong.

The MiG-17 remained in frontline service in North Vietnam until the late 1970s. The 923rd was then designated solely for ground-attack and maritime strike missions, leaving fighter interception to other regiments equipped with more advanced MiG-21s. Eventually employed as a fighter trainer, the Vietnamese retired the last of the venerable MiG-17s in the early 1980s .