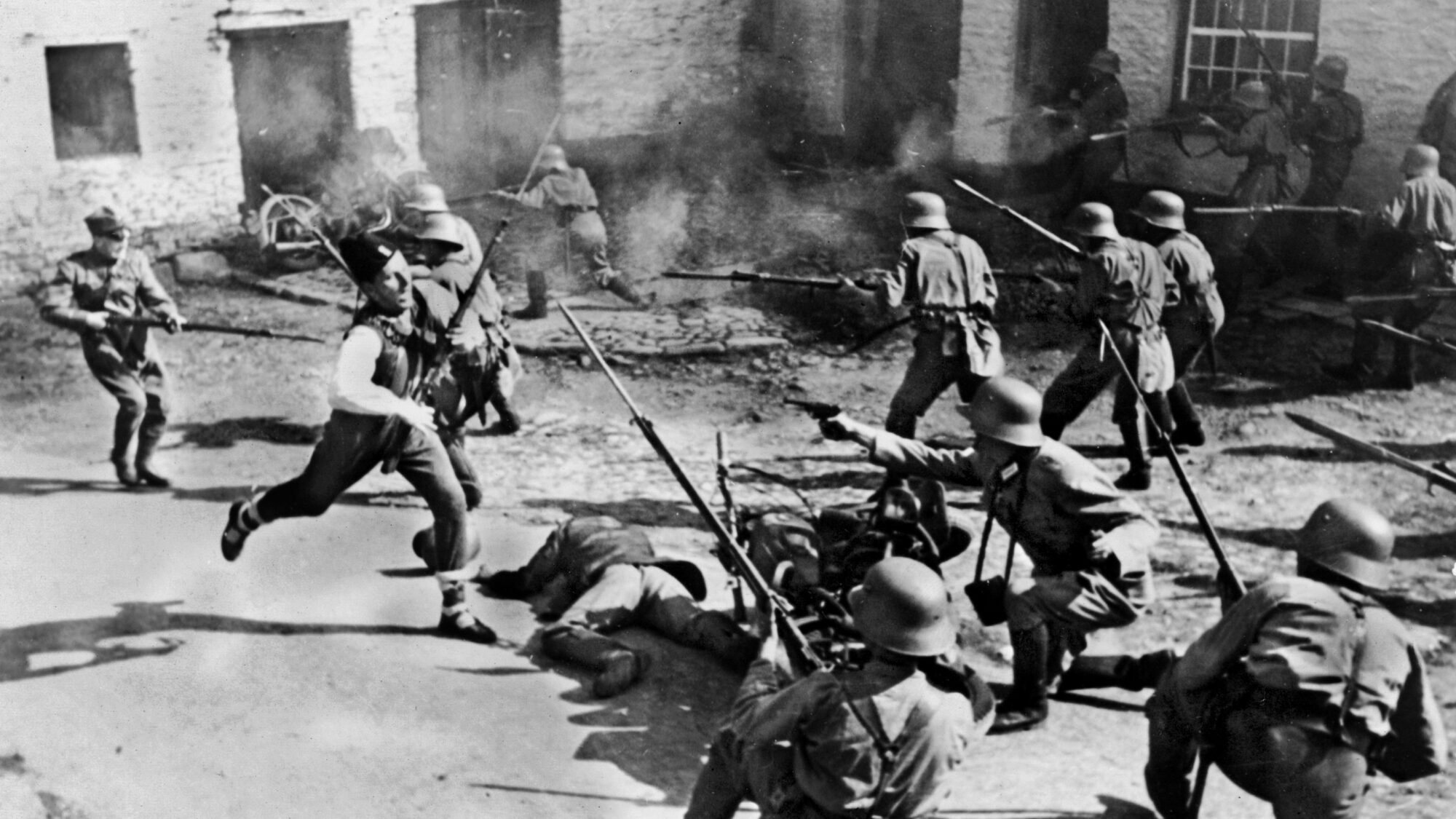 I have enclosed three photos that show without any doubt that the photo used in the “Tito’s War” article is a fake. The first photo was used on pages 54 and 55 in WWII History, November 2011 issue. The second shows the same scene from a Getty Image photo from 10/10/1942 from Picture Post magazine from the UK. The third is a 1944 American lobby card by Columbia Pictures for the movie Underground Guerrillas (the U.S. rerelease of Undercover). As you can plainly see, this is the same scene from the movie Undercover (1943). In short, it is a movie still, not a real photo from World War II.

In your editorial policy, it says you will use letters in Dispatches that are short and are of interest to readers of WWII History magazine. Using a fake photo like they did in Nazi Germany and the USSR and in totalitarian countries is definitely of interest to readers of the magazine. I think using a fake photo in this manner is very serious and significant.

Moreover, using the photo in this forged and dishonest way is unethical and academically reprehensible. Scholars do not do this kind of thing. This is something Joseph Goebbels does. What is troubling in this instance is that using the photo is not incidental or insignificant. It touches on the very issue involved here, on the ultimate issue. Did Tito’s Communists really fight the Germans?

The photo seems to be visual proof that Tito fought the Germans. But it is a fake or phony photo. It is from a movie, ironically, about the Chetniks. The photo is being used, in effect, to prove John Brown’s case, i.e., that the Communists fought the Germans. So it is crucial in the article and is thus not a minor glitch.

More importantly, Mr. Brown presents a very one-sided view of Draza Mihailovich. He omits the fact that General Dwight D. Eisenhower recommended to President Truman that Draza receive a U.S. Legion of Merit award. In 1948, Truman acted on Ike’s suggestion and awarded Draza a Legion of Merit award. Now, is Mr. Brown saying that Dwight Eisenhower and Harry Truman were Nazi collaborators too! (Because they gave an award to an alleged Nazi, they must be Nazis too!) It is nonsense. But this is the part of the story Brown conveniently censors and covers up. Draza rescued over 500 downed U.S. airmen that Muslims and Croats wanted to kill. I would recommend perusing my article “Draza Mihailovich and the Rescue of U.S. Airmen During WWII” found at: www.serbianna. com/columns/savich/038.shtml. The article is about U.S. Air Force veteran Richard Felman and his eyewitness account of being rescued by Draza’s forces in WWII. This is the other part of the story censored and faked by Mr. Brown.

I am not really surprised to learn that the photo we used, is, in fact, not authentic. Unfortunately, we were not able to learn more about the image until we received your e-mail.

We publish hundreds of photos every year in our publications and make every effort to identify them accurately. We are frequently at the mercy of the photo suppliers regarding the captions since we simply don’t have the resources to research and verify each image. While all of the sources we use are reputable, and generally have reasonably correct caption information, we do sometimes spot “fake”photos that are incorrectly identified.

We have forwarded your e-mail to the photo agency that provided the photograph in question in the hopes that they will correct their caption. Again, thanks for taking the time to correct our mistake.

Mr. Gnam has explained the error of the photo.

I had never seen the photo until a copy of the magazine reached me, therefore I could not have used it to “prove the communists fought the Germans.” And you continue with “I used the photo to prove my case, that the communists fought the Germans” and that using “the photo in this forged and dishonest way is unethical and academically reprehensible” and other rubbishy remarks. I repeat: the first time I saw the photo was when I received a copy of the magazine and therefore could not have used it in the way you describe.

That Tito and his partisans fought the Germans and Italians, and took heavy losses, is a fact of history. Also a fact of history is that Mihailovic, a Royalist, not an alleged Nazi, did ally himself first with the Germans then the Italians, and at times fought Tito’s partisans. He was dedicated to returning the monarchy to Yugoslavia when war ended. He was executed by the Tito government for his collaboration with the enemy.

You say that I omitted the fact that Mihailovic was awarded a Legion of Merit in 1948; that is three years after the war ended and outside the scope of my story. Was this an award for rescuing 500 U.S. airmen, or was it political? Quoting from a book I have here, among the flyers the Chetniks and Partisans rescued were an estimated 2,000 U.S. B-24 crews flying out of Italy to raid targets in eastern Germany and eastern Europe and bomb the oil fields in Ploesti, Romania. If the figures of 500 and 2,000 are correct, were 1,500 airmen rescued by Tito’s Partisans?

I hope this covers your queries, and add that I always keep in mind that the Allies engaged in all kinds of deception, as did the Axis.

Your piece about General DeGaulle in the Fall issue is interesting—more for what it doesn’t say than anything else. De Gaulle was a poseur who never won a battle as a professional soldier although he was intelligent and later developed great political skills. He was captured by the Germans at Verdun in the Great War and in his only outing as a regimental commander in World War II, against the Germans, was again defeated. A few weeks later, he deserted his post in France, escaped to London, and found a place there on Mr. Churchill’s payroll. The real reason the Dakar expedition of 1940 failed was that the local French considered DeGaulle a renegade and a British stooge. And it was no accident that the Allies would not let him set foot in France until after it was safely reconquered.

But DeGaulle’s crowning achievement came some 17 years later, in Algeria. There, the French Army won a stunning counterinsurgency victory. At the time DeGaulle decided to give up, the rebel FLN did not control even one square mile of Algeria. But the French at home were tired of war and DeGaulle wanted France out of Africa to devote all efforts in Europe and to develop the Bomb. He shamelessly used racist arguments against the Algerian French and the Arabs and invoked racial segregation.

So what happened? All one million French had to leave as did over 1000,000 Harkis (Moslem French soldiers). More than 300,000 Arabs were butchered by the FLN because they supported the French. The Moslems that could immigrated to France to live like animals. So the general became, in addition to all else, a French surrender monkey. Good luck, Mr. Haskew, in your rehabilitation efforts.

I appreciate your perspective on several aspects of this controversial figure’s life; however, I must say that the choice of words that he “deserted his post” is quite intriguing. For DeGaulle, it was a matter of honor. Refusal to collaborate with the Nazis hardly qualifies as desertion in the truest sense of the word. Then, the assertion that the defenders of Dakar considered him a “renegade and a British stooge” is nothing noteworthy. He considered them minions of the puppet Vichy government. Which is worse? The verdict of history has been rendered. True enough, DeGaulle was a savvy and pragmatic politician. He had few friends and quite a large number of detractors. While he may have been despised by some, he is considered a hero by others. In my work, there is no rehabilitation agenda and actually there is no need for one. De Gaulle would simply say that his record and his work on behalf of France speak for themselves. For De Gaulle, there may in fact have been three choices, the right way, the wrong way, and the French way.