Back in July, publisher Team 17 and developer Black Matter Party unleashed Hell Let Loose, a 50-on-50 World War II strategic squad-based first-person shooter, on PC. Now, the game’s brutal brand of warfare has made the leap to current consoles with its recent arrival on PlayStation 5 and Xbox Series X, following up on an open beta test that ran on PS5 in September.

The console versions of Hell Let Loose support cross-play functionality between platforms, so those who have been playing the PC version will still be able to dive in with their friends if they decide to switch over to consoles. There’s also free post-launch content in the form of the Eastern Front maps of Stalingrad and Kursk and the Soviet forces, which will follow the suit of the PC release when the content hits consoles this winter. 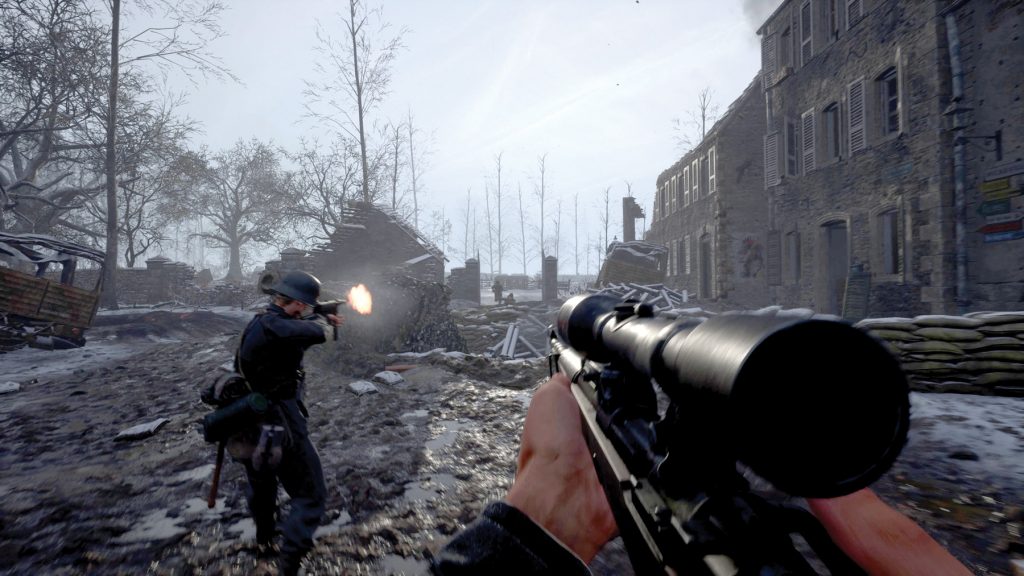 The first theater of war to be featured in Hell Let Loose takes players to the Norman countryside in the early stages of 1944’s Operation Overlord. One of the most attractive features is the sheer scale captured in this and other maps that are currently in the works. According to the devs at Black Matter, it takes approximately fifteen minutes to cross the Norman countryside map on foot. The surroundings include a mix of small villages, dense woodland, winding canals, and open countryside, offering up a bunch of different strategic possibilities along the way.

The battles themselves are waged with over 16 true-to-life rifles, machine guns, and pistols, all of which come with their own realistic limitations. From jamming to overheating and other aspects of weapon limitations, the goal is to get as close to mimicking real issues without making said limitations too overbearing or annoying. There are currently 14 playable roles that come equipped with their own unique weapons and other combat-ready items such as mines, mortars, and anti-tank measures.

Beyond settings and weapons, Hell Let Loose is split up into three key levels of warfare: Strategic, Operational, and Tactical. The first involves taking on the role of Commander and deciding on adaptive strategies for your ground forces. Call upon reinforcements and supplies and send in outside strikes to properly respond to the ever-changing field of battle. Operational duties consist of establishing supply lines to bolster forces, and Tactical roles include setting up observation posts and garrisons before settling on the appropriate course of action for each situation.
Whether this is your first time diving into Hell Let Loose, or you just want another platform or two to play on, hopefully the battlefields will remain well-populated for the foreseeable future. 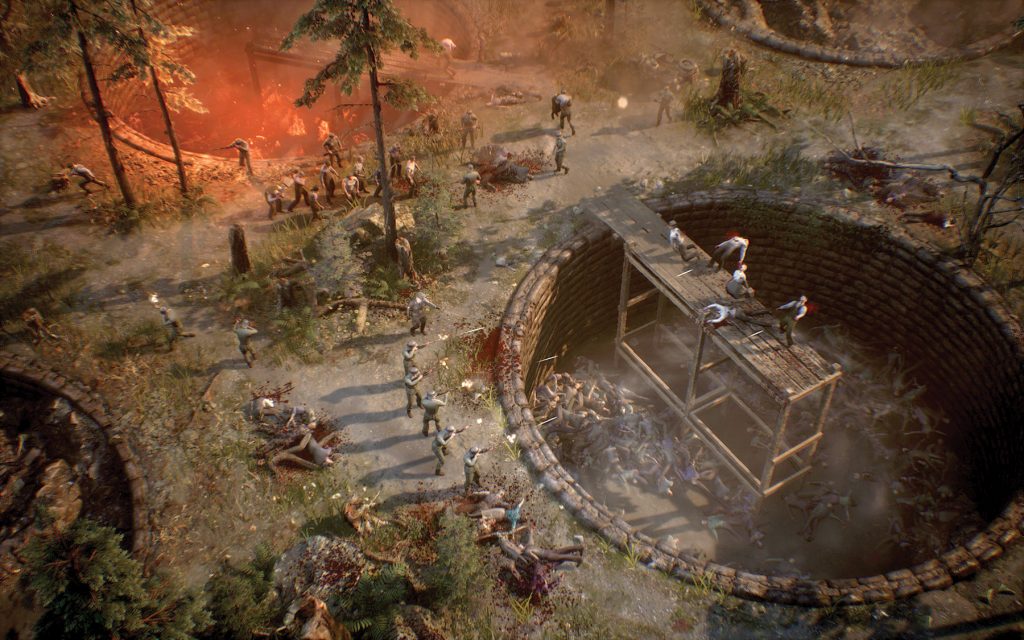 It’s been a while since we had a chance to take a look at War Mongrels, the real-time World War II tactics game from publisher and developer Destructive Creations. Following a delay, the PC version landed on Steam and the Epic Games Store on October 19, featuring English voice-overs with support for English, French, Italian, German, Spanish, Turkish, Japanese, Korean, Polish, Portuguese (Brazil), Russian, and Simplified Chinese subtitles.

The story centers on a pair of Wehrmacht soldiers who start out fueled by propaganda. Before long, they find their new purpose in fighting back against the expanding Nazi forces that got them into their regrettable situation in the first place, opening their eyes to the horrors of war in the process and eventually meeting other like-minded soldiers who have their own unique skills to bring to the team. In the context of a real-time strategy game, these varied attributes provide a chance to mix up tactics and choose what works best for each situation, from those who specialize in sneaking and distraction to others who are more action-oriented guerrilla fighters. 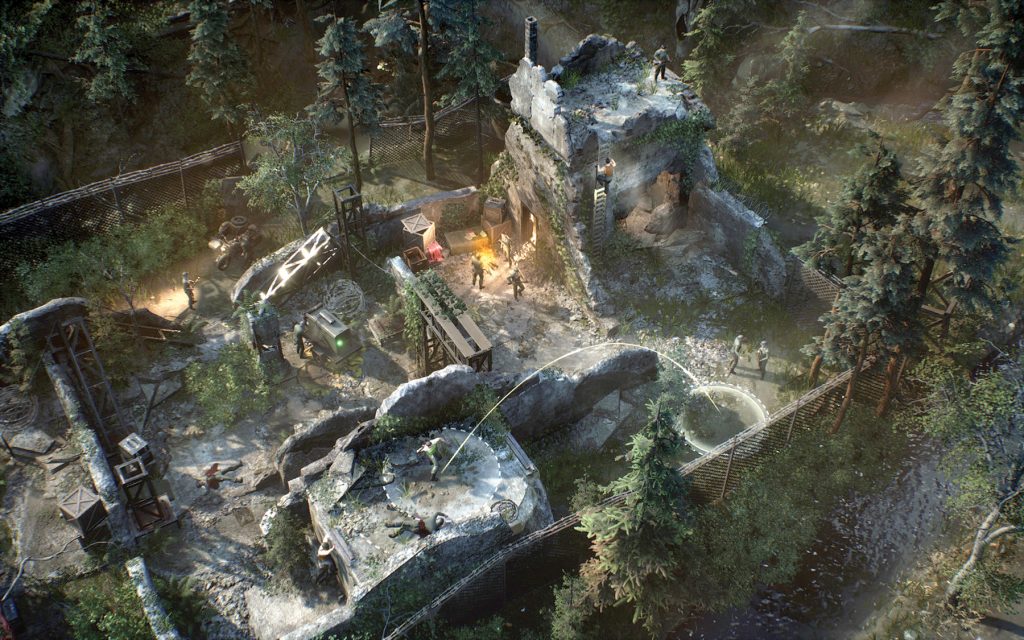 Even if the names aren’t attributed to real soldiers who served in the war, there are plenty of true stories highlighting the history behind it all. It’s not just about the events, dates, locations, weapons, and units scattered about the game; players will also find in-game historical articles and other artifacts of the time, keeping even the most intense of showdowns grounded in real circumstances. Moves like these are a great way to keep games in the genre from coming off as purely sensational or exploitative. War Mongrels doesn’t want its players to forget that its events all have a basis in reality; they’re just shown through a narrative lens unique to this particular outing.

Those who dig strategy and covert tactics can queue up actions in Planning Mode to set up a sequence of commands and fire them all off at once. Staying hidden and lurking in the shadows will give your squad the opportunity to distract the enemy, perform quick executions, and hide the bodies to keep the presence of your squad concealed. If that’s not your bag, though, you can always go into a situation with guns blazing and take on some serious fire fight challenges along the way.

One of the features that makes War Mongrels unique is the way it switches out of these strategic moments and pivots into action. If enemies spot your stealthy squad, for instance, you’ll be able to switch to twin-stick Combat Mode to shoot your way out of a potentially grim situation. It looks like Destructive Creations has put together something interesting for a few different types of players, and hopefully by the time you read this, the PS4, PS5, Xbox One, and Xbox Series X versions will have joined the PC version in the wild.